In connection with modeling a bulk oil dealer, I have posted a couple of descriptions of Associated Oil Company tank cars, most recently at this link: http://modelingthesp.blogspot.com/2014/03/associated-oil-company-tank-cars-part-2.html . These descriptions also rely on an abbreviated company history which I posted awhile back, which can be found at: http://modelingthesp.blogspot.com/2013/12/associated-oil-company-background.html . Construction of the model of an Associated Oil bulk dealership on my layout was described in my MRH column, as I have posted: http://modelingthesp.blogspot.com/2014/03/associated-oil-co-modeling-oil-dealer.html .
I decided to have a go at modeling the car shown in that previous post (the first one cited above), AOX 842. It was an 8000-gallon car built by American Car & Foundry, but with the variant underframe which AC&F called “Type 25.” That designation refers to the nominal year of introduction of that design, 1925. This underframe was specifically intended to save weight by omitting side and end sills. These sills were normally the hallmarks of AC&F underframes, but omitting them created a look typical of General American underframes. (I am indebted to Richard Hendrickson for explaining Type 25 to me.)
I found in my stash of kits an undecorated InterMountain kit for an 8000-gallon AC&F tank car, which if I can modify the underframe, could successfully model AOX 842. The underframe work looked do-able to me, so I went ahead with the kit. This is a straightforward construction project without any great complexities, so I won’t devote any space to the routine parts of the job. But three modifications I did may be worth mentioning: the weights for the car, the underframe work, and the extra pair of tank hold-downs. I also made a few variations in the kit assembly itself, which I’ll mention as I go along.
InterMountain did not include car weights in the kit, so I decided to use half-inch steel nuts, 1/2-13 in size, which weigh almost exactly half an ounce each and only cost 21 cents at my local hardware store. Four of them amount to 2 ounces, and fit neatly into the top of the tank car body. I glued them in with canopy glue; see: http://modelingthesp.blogspot.com/2013/05/a-few-words-in-praise-of-canopy-glue.html .

The tank half is shown in the kit-box cradle I use for tasks like this. I described its very simple design and preparation in a prior post, also showing its use, at: http://modelingthesp.blogspot.com/2013/05/a-working-cradle-for-model-freight-cars.html . I glued the nuts in the top half to make sure they clear the well into which the tank dome is set.
For my second modification, the underframe, here is how the kit part looks, viewing the underside of the frame. The side and end sills are visible from this angle (you can click to enlarge).

I left a vestigial sill at the bolster (as the prototype had; compare the appearance in the prototype photo, shown in the first link cited at the top of this post). I also left a short sill to support the sill step at the end of the frame (side grab irons remain to be installed). Removing most of the side sill will at least suggest the appearance of the prototype.

At this point, I mostly proceeded with assembly of the kit. One minor change I made was to substitute brass wire grab irons on the dome, as I (and others) often lift or handle tank cars by the dome, so for me, these grabs must not be fragile. I also added grab irons above the sill steps by simply using styrene rod.
The more important change was my third modification, adding the pair of tank hold-downs or bands on either side of the dome, quite visible in the prototype photo at the top of my second post about Associated tank cars ( http://modelingthesp.blogspot.com/2014/03/associated-oil-company-tank-cars-part-2.html ).
The tank bands were modeled with styrene strip. I chose to locate these right outside the dome walkways, and measured the chosen location from the end tank bands, inboard 9.5 scale feet. Those bands are convenient to measure from because they are present at the top of the tank, where a few rivets need to be removed so the new tank bands can sit flat, and then one can measure the same distance from the bolster center along the center sill, where a notch must be created on each side of the sill to accept the ends of the bands. I used a square No. 2 Swiss needle file to make the notches.
My tank bands were made from Evergreen scale 1 x 4-inch strip, about 23 scale feet long (this is too long but the excess can easily be trimmed after attachment). For each strip, I placed its center over the tank top and held its ends down near the underframe, then allowed plastic cement to wick under the strip where it contacted the upper tank. In 20 or 30 seconds, the strip was securely glued to the tank. Then each end was glued and held in place at the center sill for 30 seconds or so until bonded. It’s that easy.

You can see the brass grab iron on the dome in this view. The 1 x 4 strip is a little wide, but I had no 1 x 3-inch strip on hand.
Incidentally, I encountered what occurs in some InterMountain tank cars, that the bottom surface of the tank mounts at the bolster don’t contact the bolster itself, as they should. I just added shims of styrene strip, fitting the shims to each individual location, to fill these gaps. Those strips are the white lines you see next to the walkway on each bolster in the photo above (click to enlarge).
In the remaining parts of the kit assembly, I followed directions, except for substituting brass wire for the brake staff, something that seems to me essential for durability. I did use the kit’s bottom bracket, which I cut from the styrene brake staff. I added Kadee #58 couplers, and placed Reboxx 1.010-inch semi-scale wheelsets in the kit truck frames.
For decals, I applied the Funaro & Camerlengo set mentioned in the MRH column, which is for Associated cars of ARA Class II (erroneously shown in the F&C decals as AAR II). But the car I am modeling was built in 1929, and would have followed the ICC 103 specification. For the tank test data block, then, I used part of the SP decal set from Jerry Glow, that was done from my art work (see http://home.comcast.net/~jerryglow/decals/full.html ).
Once all decals were applied and protected with an overspray of Dullcote, I weathered the car with my usual acrylic color mixes; for a summary, see: http://modelingthesp.blogspot.com/2011/10/weathering-clinic-handout.html . I also added a little rust around the tank bands, using a wash of Burnt Sienna. Why? Here is an enlargement of part of the photo of AOX 842, shown previously in its entirety (cited at the top of this post). 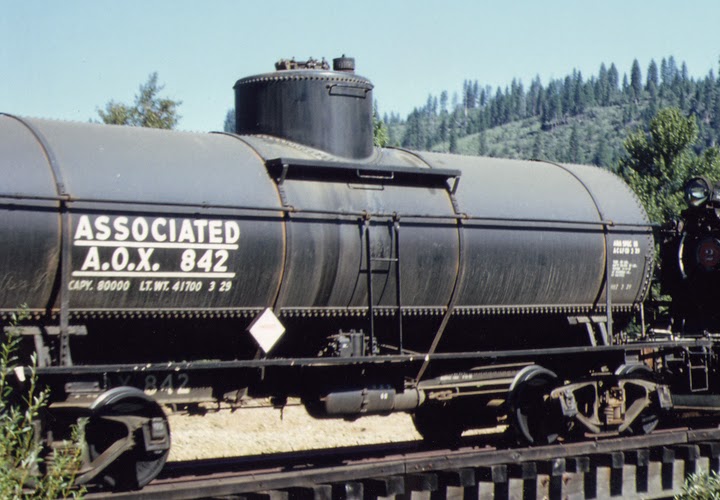 Note that as the tank has expanded and contracted with temperature variations, restrained to do so along the long axis of the car, the tank has rubbed the paint under the tank bands, leaving slight but visible rust stains at the bands.
One additional point: route cards on tank cars were often tacked or stapled to the edge of the wooden running board. You can see remnants of such cards above, on the side of the walkway near the bolster (click to enlarge).
Here’s my completed model. 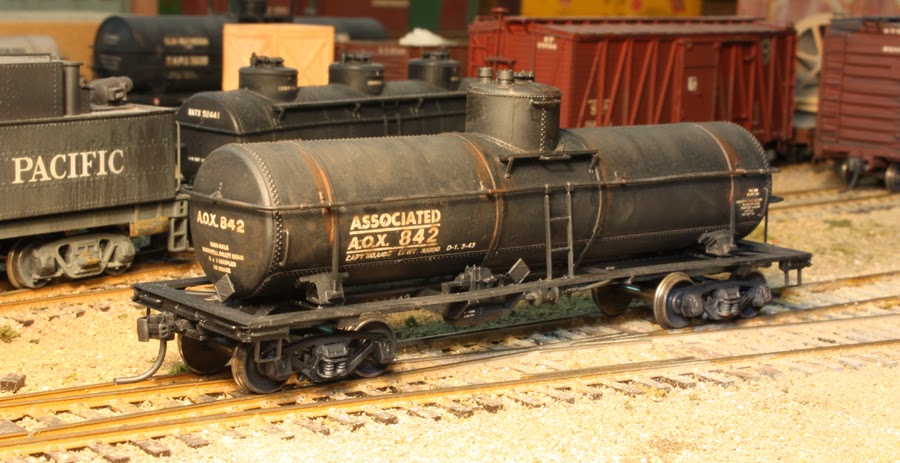 It’s interesting to have an additional tank car in the fleet, in this case one modeled from a prototype photo, but mostly I look forward to switching this car at the Associated oil dealership in my layout town of Shumala.
Tony Thompson
Posted by Tony Thompson at 10:38 AM