Awhile back, I posted a brief summary of the prototype information on Southern Pacific F-unit freight diesels, to provide some background for modeling. It’s at: http://modelingthesp.blogspot.com/2014/02/southern-pacific-f-unit-diesels.html . I followed that with a description of some old-technology Athearn F3 units I built by superdetailing an A and a B unit; that post is at: http://modelingthesp.blogspot.com/2014/03/southern-pacific-f-units-modeling-f3.html . In the present post, I will describe almost the opposite extreme in model technology, the Athearn Genesis F units and what I am doing with them.
I began with the purchase of a powered B unit, fully equipped with DCC and sound. I wasn’t quick enough to find one decorated for SP, before Athearn (and many a hobby shop) was sold out. So I bought one for another railroad, which shall remain nameless, and repainted it. For SP F7-B units, this is pretty simple. The unit is all black, except for a Daylight Red frame stripe. I airbrushed the stripe area with the red, and when it was well dried, masked it with drafting tape and sprayed the rest of the unit black. Touching up the stainless steel kick plates at the doors with Old Silver, and all handrails with white, I only had to apply the unit number.
This number should fit within the SP classes of B units with steam generators (SG), as my Genesis unit has the SG roof details. My best bet was Class DF-4, SP 8086–8139, which were delivered between June and October 1949, all SG-equipped. Although 16 of these 54 units were sent off to the T&NO during 1952–53, as Joe Strapac documents in his Volume 3 of the series, Southern Pacific Historic Diesels (“E-Units and Passenger Fs”), the majority, 36 units numbered 8090–8095, 8102, 8103, 8106-8111, 8114–8119, and 8122–8139 remained on Pacific Lines. As late as 1953, my modeling year, they were freely used in freight service. I used Microscale set 87-201 for the numbers.
When done, here is how it looked. Not dramatic, I know, but very SP for all that. I have rubbed some paint off the “stainless” Athearn grill, and should remove some more, but prototype photos in the early 1950s do not show much brightness in this area.

Since this unit was powered and had DCC control and sound, I decided to pair it with a dummy A unit for my layout. I had both a powered Genesis A unit, and a Genesis frame which I had traded for another shell, so to make the dummy, I just swapped the shell of the powered A unit with that frame. It ended up like this, though still awaiting weathering: 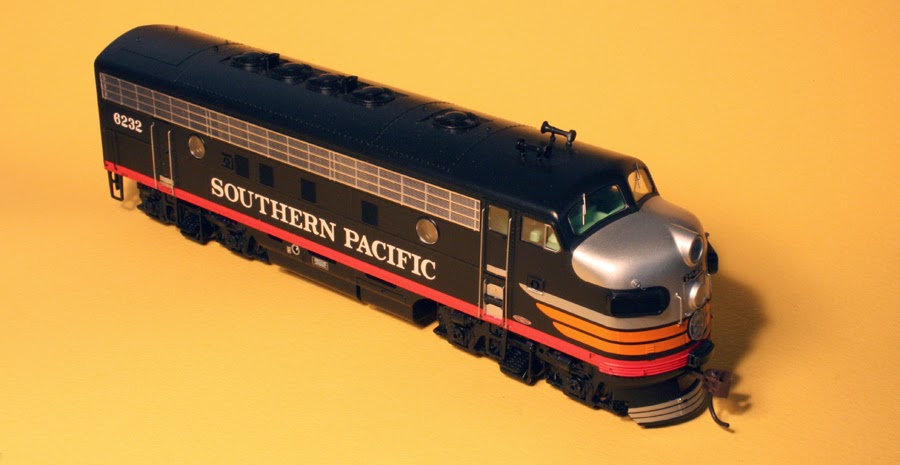 This unit carries the number applied by Athearn, which happens to also fall into Class DF-4, the A units of which had boiler controls so they could work with the SG-equipped B units. And again, SP 6232 was among the 36 units of Class DF-4 which were not transferred to T&NO. So there is some logic to locomotives 6232 and 8092 being together, even if in freight service. I don’t know for sure that I will keep these two units as a pair, but they are a reasonable set for now.
The only problem at this point is to provide lights in the A unit, under control of the DCC decoder in the B unit. The lights should be attached to the A-unit shell, so my plan is to connect the two forward-light wires of the decoder, through a 2-pin miniature connector at the end of the B unit, to a 2-plug connector on the A unit frame, and I’ve got it. Sometimes you gotta love modern technology. But the A-B set is already in service, despite lack of working headlight.
To repeat what I said about my F3-A and -B pair, my layout is small enough, and trains short enough, that an A-B set looks all right, and with my totally level main line, provides enough power, so only one unit needs to be powered. This modern Athearn Genesis A-B set fills that bill.
Tony Thompson
Posted by Tony Thompson at 12:57 PM