As readers of on-line modeling email lists will know, Larry Kline passed away about two weeks ago. I’m preparing to attend a memorial gathering at his home in Pittsburgh, hosted by his widow Dana. My wife Mary will go with me, as we both were very good friends with the Klines for almost the entire 17 years we lived in Pittsburgh.
I wanted to write an appreciation of Larry, and that’s below, but I should point out that a very comprehensive obituary was composed by Larry's son Jonathan, so I won’t repeat the basics. Jonathan’s piece was published in Pittsburgh-area newspapers, and can be Googled. I have taken the liberty to add a little to Jonathan’s text, expanding coverage of Larry’s modeling career, and the composite version is available on Google Drive, at this link:

Larry was a very skilled model railroader. He did not hesitate to scratchbuild almost anything, including steam locomotives, in his beloved O scale. He built many streetcar models, all of which operated under working overhead. His superb model of a B&O War Emergency hopper car, with all the wood parts made of wood, and all the metal parts made of metal, won First Place in Freight Cars, always a most competitive category, at the NMRA National Convention in 1977. The car even had working brakes.
Larry had built a large O-scale layout on the third floor of his house in Squirrel Hill, and when he moved to the Bellefield area, he salvaged parts of it, and had a new basement layout mostly completed and running. I saw it last year and even ran some trains.
He was a serious researcher, trained as an electrical engineer, which was his professional career at Westinghouse. Much of his work in later years was in defense electronics and computer analysis, so he couldn’t talk freely about a lot of it, but he was well respected in several sub-fields of his profession, particularly plasma behavior. Those research skills served him well as a modeler, and when he had a historical finding to communicate, it was worth listening, because you could be sure he had tracked it down to bedrock.
Along with C.J. Riley, he and I formed the three-person group we called, with tongue firmly in cheek, the Iron City Ferroequinological Society. I’ve written some about our activities in a previous post. (You can read it at: http://modelingthesp.blogspot.com/2013/07/that-red-icfs-truck.html .) The three of us often traveled together to regional and national NMRA conventions, as well as attending pretty regularly the monthly meeting of our local Division 2 of Mid-Central Region (we all served as various officers of Division 2 at different times). On those convention trips, we often took detours for railfanning and photography. Here’s a nice shot of Larry (at left) and me, taken by C.J. 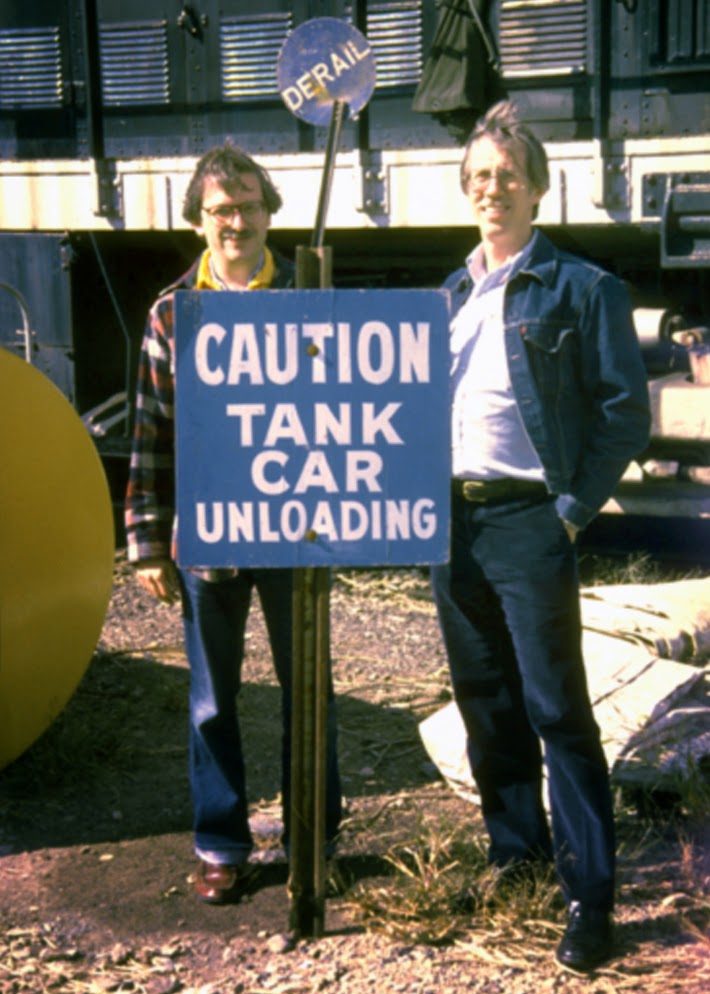 The photo conveys our joint work developing a clinic on tank cars and how to model them, something we originally presented jointly, using 35-mm slides, and which in later years morphed into Powerpoint and to much more modern models. I continue to update it from time to time, and am still giving it occasionally.
Larry did have one enthusiasm I didn’t share—stock car racing. He subscribed to Auto Racing News, and though he followed NASCAR, his real interest was in the smaller-time racing scene, including dirt tracks in the Pittsburgh area. I did go to local races a couple of times with him, but for me it was far less fascinating.
Although it’s been 20 years since I moved to Berkeley from Pittsburgh, Larry and I had remained in frequent contact, by phone in earlier years, more and more by email in recent years. We saw each other every year at the big modeling meets around the country, and I think we both relished the chance to to sit down over a meal or a beer and talk modeling—or just about our personal lives. He was a close friend, and I know I will continue to miss him.
Tony Thompson
Posted by Tony Thompson at 10:38 AM