Another wine shipper for Ballard

I have presented comments in previous posts about wine as an industrial commodity, because wine is shipped from the area I model. The first post may be found here: http://modelingthesp.blogspot.com/2012/02/wine-as-industrial-commodity.html , and then I updated the comments with this post: http://modelingthesp.blogspot.com/2012/02/wine-as-industrial-commodity-update.html .
In the first post cited above, I showed a small wine-shipping building, which I had built when I lived in Pittsburgh, for a module I assembled as part of a modular group there. My module was named San Ardo, for the small town on SP’s Coast Line, though none of the structures or trackage actually modeled the prototype San Ardo. This structure was intended to show an older shipping building, with an attached modern addition of brick. A photo of it was shown in that post, and here is a repeat of that photo:

The reefer in the photo has ice hatches open in ventilator service, which would often be satisfactory for wine shipping, with the car functioning more as an insulated box car than as a refrigerator.
This business is envisioned as a relatively small operation, which ships out wine in barrels, for the purpose of blending with other wines. (This was very common in the 1950s, with California wine being shipped elsewhere for blending, or simply to be bottled under the house name of a local business.) The workman moving a barrel along the loading dock is intended to portray this feature.
I always liked the way this structure looked, so having salvaged it from that module in Pittsburgh, I decided to replace the signage so I could use it on my present layout. I want it to furnish a contrast to the large winery at the other end of Ballard (which has been partially shown in several posts, for example: http://modelingthesp.blogspot.com/2013/06/signs-for-structures-part-2.html , but I will defer discussion of that structure to a future post.)
The two structures which make up this industry are quite simple, both being built of Bristol board (a standard art material), with square balsa strip inside for stiffening. On the older part of the structure, I used Campbell windows and shingles, and modeled an open door into the warehouse (visible in the photo above). Then the interior was painted black so it wouldn’t have to be detailed. Here it is with the roof off. 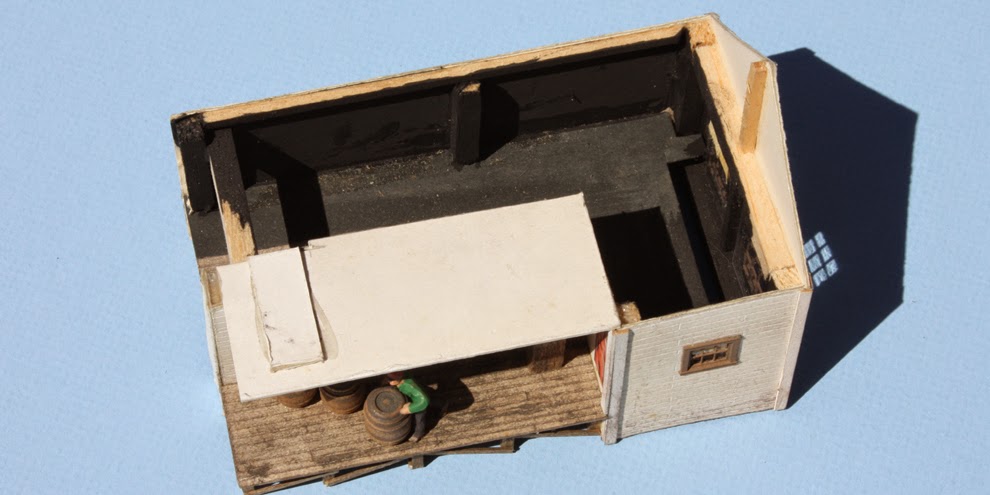 The larger section, representing the newer part of the business, is little more than a box, covered with Walthers brick paper (their number V167). That paper is just one of many useful modelbuilding materials once sold by Walthers. The original paper is a pretty bright color, so it has been substantially dulled with powdered chalk. Here’s the interior.

Putting the two parts together, here is how the entire structure was intended to look, still with the old signage. Compare the first photo in this post. On the brick section, I inset the flat roof and used stripwood to suggest a concrete coping on the parapet. Roll-up doors are suggested by scribed wood. 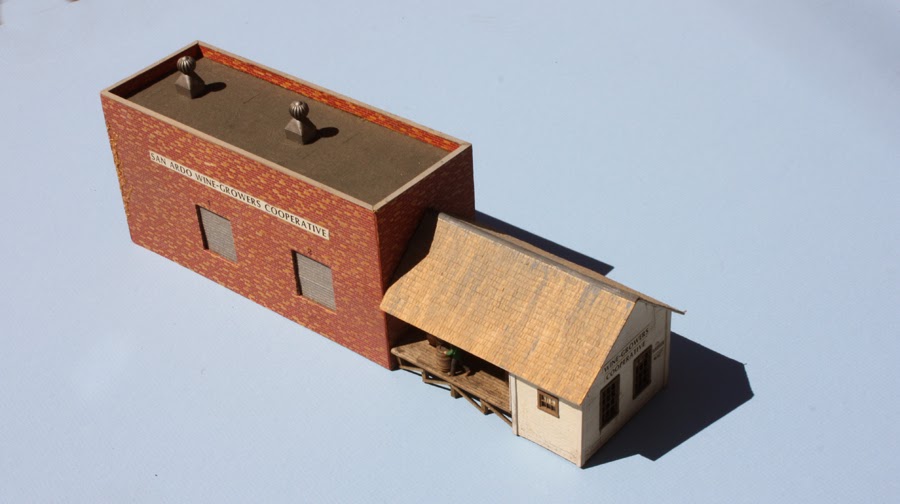 A new sign identifying Ballard was called for. After some rumination, I chose Stone Serif for the type face. It’s named for Sumner Stone, its creator, who was director of typography at Adobe from 1984 to 1990. (I’ve posted commentary on “typography and the layout” in the past; for one example, see this link: http://modelingthesp.blogspot.com/2011/11/type-and-typography-on-layout.html .) If you’re interested in the typeface family (it includes a serif face, a sans serif face, and an in-between design called “informal”), there is a whole book about it, called On Stone, by Sumner Stone (Bedford Arts, San Francisco, 1991). My sign is in ITC Stone Serif Semibold. While not a 1950s typeface, it follows the designs of a much earlier period and looks all right.
With these modest changes accomplished, the two structural parts now serve in my layout town of Ballard, right across Bromela Road (foreground) from the Ballard depot. My Union Oil bulk depot is at right. The box car spotted at Door 1 is an inbound load. (You can click to enlarge.) 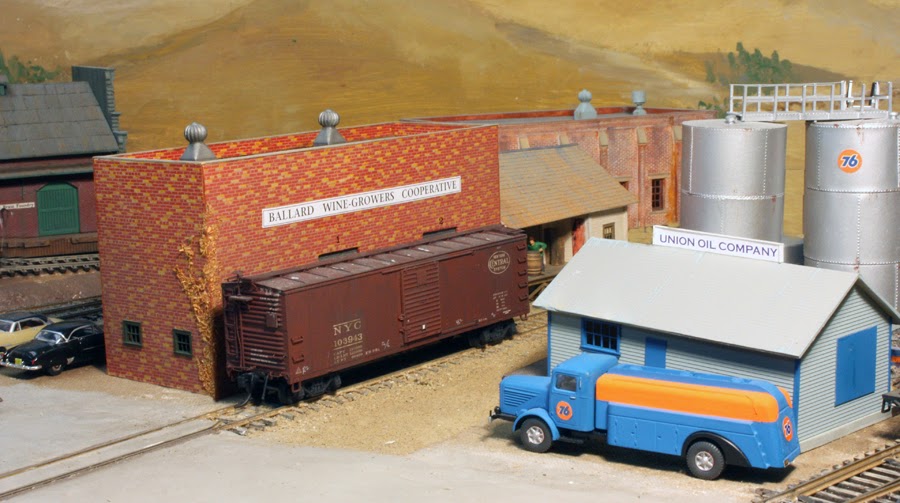 This co-operative does not make wine in this building, but uses it only for shipping. And also unlike the Zaca Mesa winery at the other end of Ballard, this little business does not ship out wine in bulk (tank cars), but instead exclusively ships in the form of wine barrels in reefers.
Tony Thompson
Posted by Tony Thompson at 3:43 PM