In my previous post (see: http://modelingthesp.blogspot.com/2014/05/the-equipment-register-part-1.html ), I introduced the first part of my essay on the Official Railway Equipment Register, or ORER. Here is the second part.

Other Railroad Research Uses
“And there are other uses for the ORER, too, some which go beyond modeling concerns as such. Because the Register listings of cars are so detailed and accurate, it is often possible to trace renumberings, rebuilding, and ownership transfers of cars, since in a particular quarter (or month, in the early era) changes to a listing are identified by a “dingbat.” (A symbol or emblem is called a “dingbat” by printers.) Normal changes such as destruction of cars by wrecks, or even by systematic scrapping, did not receive dingbats, but addition of a new group of cars, for example, a delivery of new cars in progress at the time of submission of an ORER entry, would be signified by a star symbol [dingbats are illustrated below]. An increase in an existing group of cars was indicated by a diamond, while wholesale reduction (usually by sale or renumbering) in a group of cars was signified by a small circle and bar emblem (click to enlarge).

“If one is trying to determine the origin or destination of a group of cars which was sold or transferred, the strategy is to look first for the end of the sale you know about, such as the arrival of a batch of cars on the XYZ Railroad. When it is found in a particular ORER, you then know the time of the transfer (plus or minus one issue of the ORER) to the XYZ. You then search for the sale end in likely sellers, and should be able to locate the disappearance of the cars, with the identity of the car group verified by matching their detailed dimensions between the entries for the XYZ and the seller. This technique, of course, requires access to a set of ORER copies, which is certainly not part of every library’s collection. An accessible exception is the California State Railroad Museum Library in Sacramento. Copies of particular listings (e.g. a railroad in a specific year) can be ordered by telephone, (916) 323-8073.
[Shown below are two cover images of issues of the ORER, one for April 1912, when it was a monthly publication, and the other for October 1958, when it was quarterly. 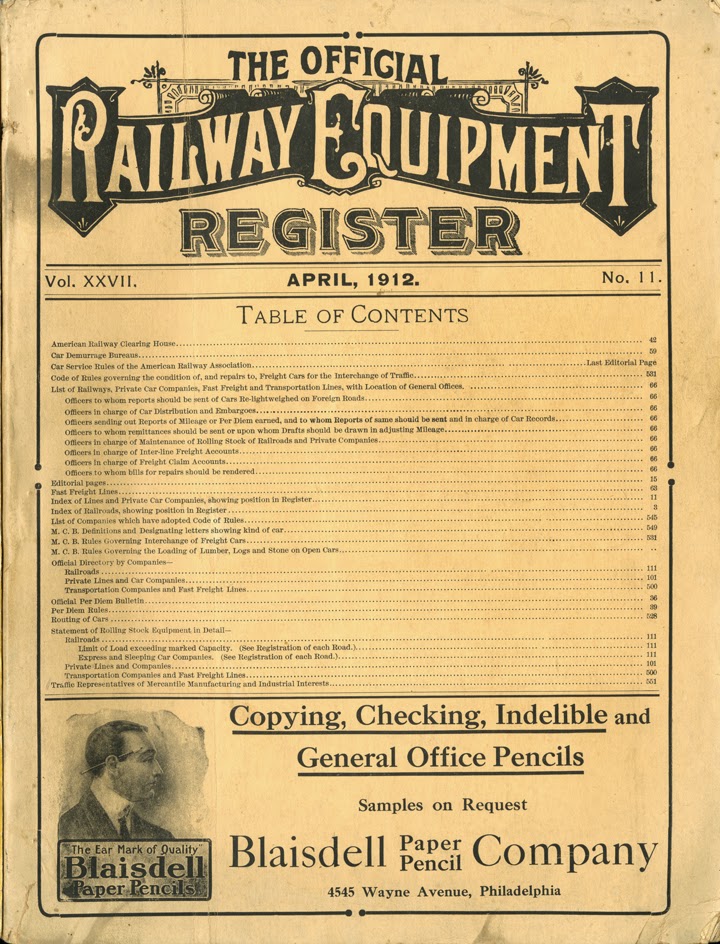 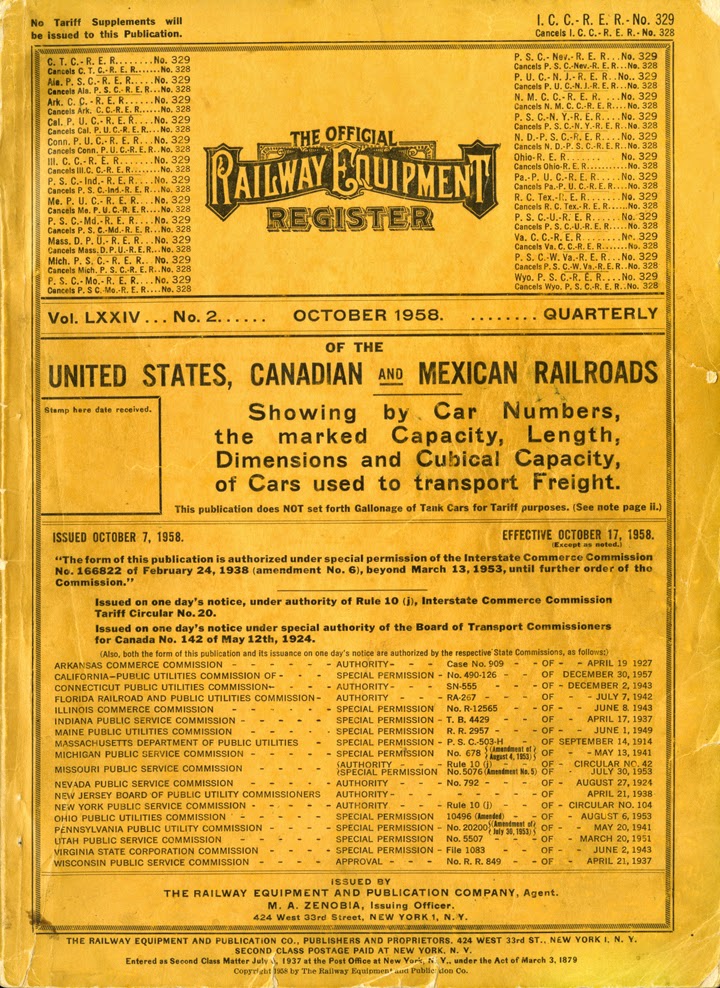 Though issued almost 40 years apart, they are certainly similar in appearance and only slightly different in size. By 1970, however, a simpler cover, with sans-serif type, had taken over.]
“Still another aspect of freight car usage which relates to the Register is the Car Service Rules, high points of which are printed in the back of each issue, together with the Per Diem Agreement. These are of interest if a modeler would like guidance in operating more prototypically. Perhaps the major point to be made here is that it’s sometimes overlooked that the AAR Car Service Rules in the 1950s required that ‘foreign’ cars were to be loaded in prefererence to home-road cars.
“The AAR Car Service Rules in fact specify that foreign (off-line) cars must be used, if available, in preference to home-road cars for loading to off-line destinations. The reason is simple. Use of the foreign car avoids sending cars home empty. Consider a railroad in Pittsburgh which is sending a load to Los Angeles, and the L.A. customer will then ship a load back to Pittsburgh. If these two railroads both load home-road cars and send the foreigns home empty, every load shipment is matched by an empty move across the country. That wastes available cars as well as the cost of moving the cars. On the other hand, if the AAR rule is followed, these pairs of shipments could all be done in one car.
“The newcomer to these rules tends to attach too much importance to the per diem charge. In fact, railroads derive most of their revenue on a load by originating it. The only benefit in using a home car is possibly to save the per diem charge, which is relatively small. (There may be no saving at all; the foreign car has to be moved homeward, loaded or empty.) The per diem fee is intended to spread the cost of owning and maintaining cars over all users of the fleet, but, like library overdue fees, is also intended to keep cars in circulation. In adopting the per diem, the railroads also agreed to abide by car-service and interchange rules, one of which is the one discussed here. To summarize, this rule says, ‘Keep ’em home and send ’em home.’
“If this topic of interchange procedures is of interest, there are two books which give a broad yet simple and readable summary of more than I have space to cover. These are Freight Cars Rolling, by Lawrence Sagle (one of the most under-appreciated railroad books in existence) and The Railroad - What It Is, What It Does, by John Armstrong (now you understand my apology at the beginning [of the first section]).
“Yet another valuable section in the back of the Register is the summary and definitions of AAR Car Classifications for both passenger and freight cars and, for freight cars, small diagrams to illustrate many of the definitions. These same AAR classes are also used for entries in the railroad sections, so if you don’t know what kind of car an AAR class GA or a class SC is, you can look it up. Only for tank cars is the information incomplete, since for those cars one also needs to understand the ICC (now DOT) specification. In 1953, a tank car would be fully described by both: an AAR Class TP tank was a pressurized car, and the ICC specification (e.g. 105A400) would additionally inform you that it was a welded and jacketed car, designed for a pressure of 400 pounds per square inch with safety valves set for 300 pounds. The ICC specifications can be found in Car Builders Cyclopedia volumes, among other places.”

This second section of the essay describes a few of the items of information that a modeler might wish to use in the ORER. The following sections connect the ORER listings with the lettering seen on freight cars, and will be along shortly.