The third section of my essay on the ORER is contained in this post. Unlike the prior ones, it has some car photos. You can read the preceding section at: http://modelingthesp.blogspot.com/2014/05/the-equipment-register-part-2.html . In this post, I take up, among other things, reweigh lettering, which has been the subject also of an article I wrote for Railroad Model Craftsman, which was published back in April of 2011. The article, as I originally submitted it to RMC, got a little garbled in the process of going into print, so a corrected version is available through this blog, at the following link: http://modelingthesp.blogspot.com/2011/03/reweigh-article-from-rmc.html .

“Freight Car Lettering and the ORER
“Freight car lettering can be greatly assisted with a selective use of Register information. An explanation of why this is true is presented briefly here and accompanied by examples of required lettering, corresponding to ORER entries, in the photographs. If in doubt about any of the car dimensions shown in the ORER entry, there are Key Pages giving all the definitions of the dimensions, included at the back of the ORER.
“Freight shipments are billed to the shipper on the basis of weight, for most categories of freight. The applicable tariff specifies a cost per pound in most instances. The basis for these charges is the weight of the cargo as shipped, which is determined by the railroad by placing the entire car on a scale after pickup from the shipper. Of course, the empty or tare weight of the car must be subtracted from the gross weight of the loaded car. Accordingly, the tare or ‘light weight’ of a freight car, which is lettered on the car side, is not just another boring detail of car lettering, but plays a vital role in shipping charges.
“When built, a batch or lot of freight cars ordinarily all has the same light weight for each car, unless there are variations within the lot in such items as trucks, internal equipment such as loading racks, or some other major hardware item. The builder would stencil the light weight on the car during its first paint job, along with the notation ‘new’ and the date of weighing. During the life of the car, however, repairs may be made, or other equipment replaced or exchanged, resulting in a change in the light weight. An example would be replacement of a wheelset or truck sideframe, which can easily differ in weight by more than a hundred pounds. Even normal wheel wear (a maximum of about half an inch tread depth on a single-wear wheel) removes weight approaching 100 pounds per car.
“For these reasons, AAR Car Service Rules (summarized in the back of the ORER under Rule 11) required re-measuring light weights of any car which was repaired, and (in 1953) to reweigh most kinds of cars every 48 months even if no repairs had been done. More recent rules permit longer times between reweighing.  The new light weight was then stenciled on the car, along with identification of the place of reweighing, and the date. The car’s load limit would also be changed, as explained below. The new light weight was reported to the car’s owner, who maintained records of individual car weights.
“One consequence of this reweigh requirement is that the notation near the capacity data on a new car, such as new 8-46, would only remain on the car until a reweigh occurred, a maximum of 48 months. Thus such a car, if you were modeling 1953, would have to have a reweigh symbol in place of its original new lettering. Moreover, the dates accompanying all the reweigh symbols should be within 48 months of the time you are modeling. Tank cars were the primary exception because their cargoes were not ordinarily billed by weight, and they often retained new notations for years.
“After a number of years in service, then, cars of a particular class could well have a range of light weights, and would of course have a wide variety of reweigh dates and symbols. A word is in order about station symbols. A standardized, national list of these abbreviations of place names, called “station symbols,” was maintained. Today, this has been simplified to require only the initials of the railroad doing the reweighing, but in the steam era, thousands of these weigh station symbols were listed. [An extensive version of this list in the steam era is available on-line; go to  http://www.steamerafreightcars.com/prototype/protoinfomain.html , and click on “reweigh station symbols.”]
“The presence of a particular place in this list meant only that a scale was located there, together with the tools to restencil cars. Examples of symbols across the United States include oak (Oakland, Calif.), bi (Blue Island, a large yard near Chicago), om (Omaha), des (DeSoto, Missouri — MoPac shops), hi (Hillyard, the NP shop at Spokane, Wash.), wc (Wichita, ATSF car shop), jax (Jacksonville, Fla.) and hag (Hagerstown, Md., on Western Maryland). The Pennsylvania Railroad had its own scheme for reweigh symbols, using numbers for locations. A commonly seen example is P-57 (Altoona, Pa. — PRR shops), and to decipher these, you just have to know some Pennsy lore [PRR station symbols are listed in the on-line resource cited above]. Reweighing was most commonly done on the owning railroad, but if the reweigh period had expired with the car on a foreign road, the car could be reweighed and stenciled there.
“An additional detail of importance is that the light weight of a car, and its load limit, are connected numbers. This is because the technical basis for axle capacity, which in turn is the basis for load capacity of trucks, is the total weight on the rails. That total weight is equal to the sum of the tare or light weight of the car, and its load limit or maximum permitted load. These total weights are given in Table 1 for several axles and journal sizes from the 1950s. For a 50-ton car, for example, the load limit and light weight always add up to 169,000 pounds. It is these fixed total weights which meant that a change in the light weight also meant a change in the load limit, and both would have to be restenciled together.

“The third item in the weight data on a freight car, the nominal capacity, is intended to be a round number. Usually rounded to the nearest 10,000 pounds, though permitted to have 1000-pound increments, it usually corresponds to the nominal truck capacity (occasionally it corresponds to underframe capacity). Although it cannot exceed the load limit, there is no simple relation between the nominal capacity and the load limit. A 50-ton flat car may have a light weight as little as half that of a 50-ton box car, but both have the same nominal capacity, 100,000 pounds. The photos below contains examples of the various capacity details mentioned above.”
[Two example photos are below. You can click on them to enlarge.] 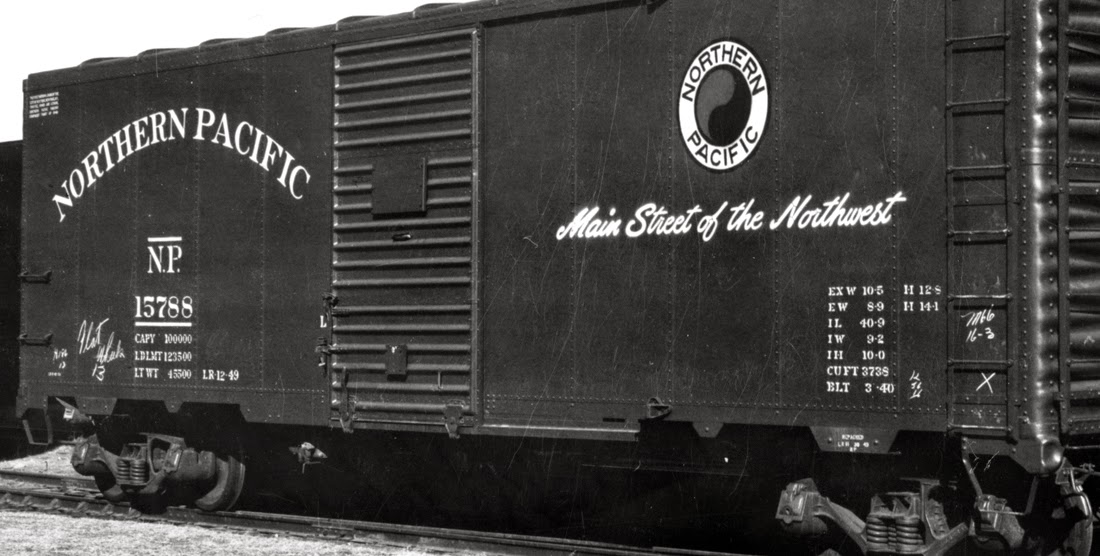 [Above, NP 15788. As usual, the dimensional capacity data are at the right, and the weight capacity data are at the left of the car side. As is typical with 50-ton cars, this one, built in 1940, has Code D axles (see Table 1, above). The station symbol to the right of the weight data reads ‘LR 12-49.’ This refers to Laurel, Montana, an NP shop, and of course December 1949, when the reweighing was done. This is a detail of a George Sisk photo of 1950, from the Charles Winters collection.]

[This second photo, of WM 13984, shows a “55-ton” hopper, so called because its nominal weight capacity is 110,000 pounds. The Bethlehem builder emblem is on the car, just right of the center rib. The car has Code D axles, as shown by the sum of the light weight and the load limit (again, see Table 1, above). This Wilbur C. Whittaker photo was taken at Elkins, West Virginia on May 28, 1953, when the car was just three months old; it still has its NEW weigh date.]

This concludes Part 3. I will complete the presentation of the original accompanying photos and captions in the succeeding Part 4.
Tony Thompson
Posted by Tony Thompson at 10:08 AM