Awhile back I posted a brief comment on replacing the grossly oversized valve casing or bonnet on the Athearn “chemical” tank car. That post can be viewed at this link: http://modelingthesp.blogspot.com/2010/12/upgrading-old-models-2.html . Tank cars of this type usually have a platform around the valve casing, sometimes called a “dome platform,” though in reality the casing is not an expansion dome. In the present post, I want to describe further efforts I’ve made to improve the platform area of the Athearn model.
As I mentioned in that previous post, the Athearn valve casing is at least as large as S scale in size, but can be replaced with the correct-size Precision Scale brass casting No. 31005. But the platform around the bonnet is also way oversize, not less than S scale, probably more. (If you doubt that, try posing an HO scale workman on that platform.) The overall car model doesn’t look oversize, because it was probably proportioned from a much smaller car (many prototype ICC 105A cars are only 6000 gallons, whereas Athearn has created an insulated tank of fully 12,000 gallons capacity). But whatever the reason for the appearance, how can we fix it? Can we use anything of what Athearn provides?
I doubted that from the outset. For one thing, Athearn’s platform attempts to represent metal-grid platform material, though until 1948 platforms like this were almost always wood planks. But I decided to have a try. First step, remove the platform (they are not glued) and cut the platform crosswise to remove some length. Here are the cut pieces, viewed from above (the long axis of the tank would be horizontal in this view); you can see some Scotch tape holding the pieces for photography. 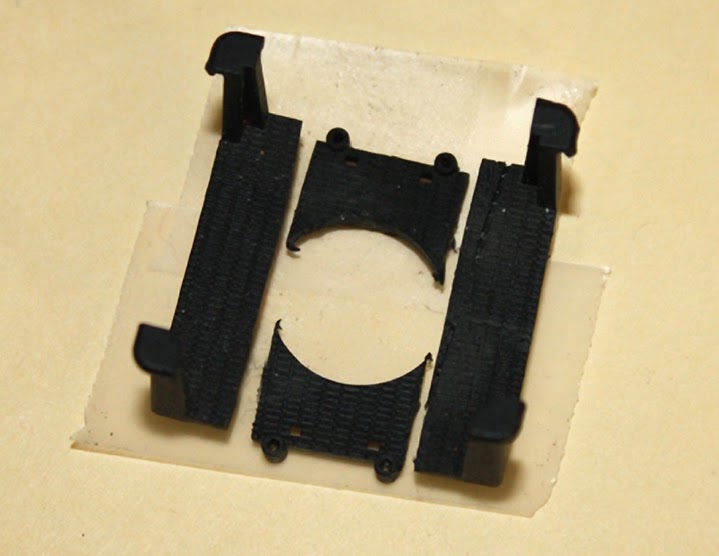 In this view, I have not yet cut down the corner posts.
Next I reassembled the three parts shown above, and added a piece of square styrene strip underneath each side of the platform, to tie it together. Warning: this is one of those tasks that require between three and four hands to manage. Not sure I would do it again, unless I can figure out a better procedure. Once so assembled, it looked like this from below, showing the white reinforcing strips. 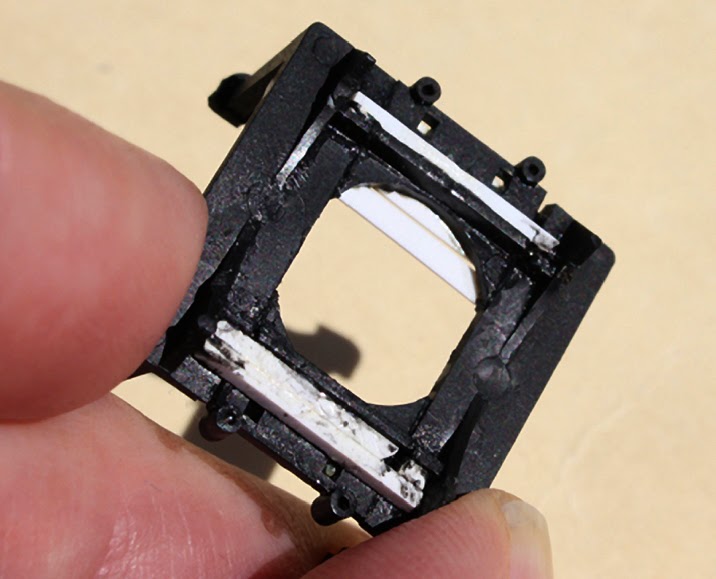 Now I added planking on top of the platform, with scale 1 x 6-inch styrene strips. Then I cut down the corner posts by about one-third in height, and re-attached the post tops so a handrail could sit underneath the top corners, as on the original model. I simply bent brass wire to fit, to make new handrails. The corner post shortening helped the looks, but the posts are simply too thick, and here again, the result is less than what I wanted to accomplish. Still, I did get a lot smaller platform. Here is the completed part, next to a stock Athearn platform; you can see the planks. My modified platform is considerably shorter in length (parallel to the long axis of the car) but no narrower in width; the width really ought to be reduced also. 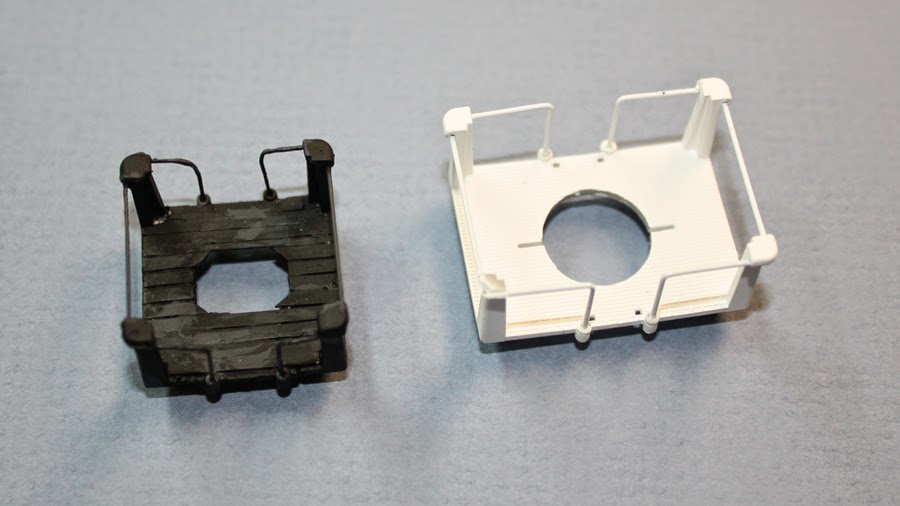 But at least this is closer to what ought to be on one of these tank cars. Here is the completed platform on a Dow Chemical tank car, which also has the replacement Precision Scale bonnet, next to a stock Athearn model. Even though the modified platform is not all I wanted it to be, it is certainly an improvement. 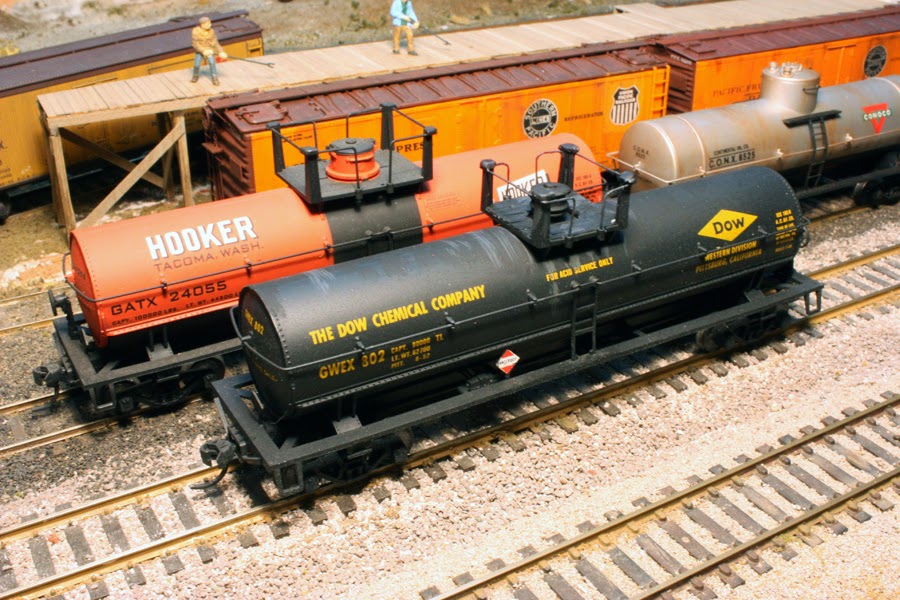 Incidentally, there has been at least one non-brass tank car model in HO scale that actually had a correct platform, the Thomas Trains version of the ICC 105A. I showed a photo of one of those models in a post about Thomas, at: http://modelingthesp.blogspot.com/2012/07/thomas-industries-tank-cars-update.html .
This was an interesting project, if kind of fiddly in spots. I have some additional ideas to try, heading for an even better platform for these ICC 105A tank cars. My hope is that by trying some scratchbuilding, Murphy’s Law will kick in, and someone will immediately bring out a commercial after-market product to do the same job. I’d love that, because I have a bunch of these cars to correct!
Tony Thompson
Posted by Tony Thompson at 11:08 AM