About two years ago I presented a series of blog posts about loads for open-top cars, one of which was about pipe loads in gondolas. You can read it at: http://modelingthesp.blogspot.com/2012/01/open-car-loads-pipe-in-gondolas.html . In the present post I expand on one particular pipe load.
One type of pipe load I showed in that previous post used the kind of tubular coffee stirrers one finds in some coffee shops. They are about five inches long, perfectly sized for a 40-foot gondola in HO scale, and about an eighth of an inch in diameter, which is about 11 inches in HO scale. They are often white with blue stripes, but sometimes are white with red stripes; stripes can be wide or narrow. They look like this: 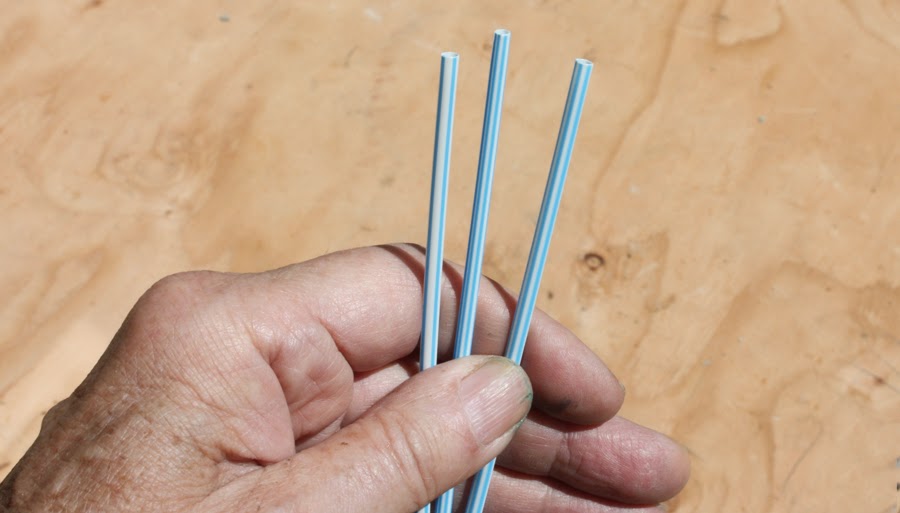 My loads constructed with these coffee stirrers as shown in that previous post were built up to rise above the sides of gondolas, and thus to require side stakes and cross ties; in that post, I showed the AAR loading diagram to specify these features. But if a load of this kind did not extend above the car sides, it did not require side stakes. I decided to make a couple of loads like that, to add some variety to my gondola loads.
My method of making them is really pretty simple. I cut a piece of waxed paper to fit into a gondola, with folds so it reaches into the corners of the interior, then lay in a layer of the stirrers. I drip a few lines of canopy glue transversely across that bottom layer, then lay another layer on top, and drip another couple of glue lines across that layer. (For some information about canopy glue, see: http://modelingthesp.blogspot.com/2013/05/a-few-words-in-praise-of-canopy-glue.html .) Tube ends in the stack should not be lined up, as they would vibrate and move independently in transit, even if originally loaded in alignment. (And the stirrers are not all exactly the same length anyway.) Continue until there are four layers (bringing them to just below the top of the sides), then let dry. Here’s a photo of a glued load in the waxed paper:

The easiest way to paint such a load is with a spray can (after removing from the gondola, of course). I like the Tamiya TS-48 color, called Gunship Grey, for this job, as it looks fairly much like steel. The spray will penetrate a ways into the tube ends as well as getting into the valleys between them, and creates a pretty good coverage. This paint goes on slightly glossy if you spray from too close, and then I overcoat it with a little Dullcoat to keep it flat. If you spray at the proper distance, it does go on flat. One of my loads looks like this in an Ulrich GS gondola upgraded with wire grabs, brake rigging, etc.:

This design of load is easy to make and helps your gondolas look like they are doing some work. I recommend it as another route to more open-top car loads.
Tony Thompson
Posted by Tony Thompson at 10:31 AM