Awhile back, I posted a brief history of the Tidewater Associated Oil Company (see: http://modelingthesp.blogspot.com/2013/12/associated-oil-company-background.html ), and a description of the tank car fleet of the company (see: http://modelingthesp.blogspot.com/2014/02/associated-oil-company-tank-car-fleet.html ), and I also offered some modeling comments about an AOX car (see: http://modelingthesp.blogspot.com/2014/04/associated-oil-tank-cars-modeling.html ).
In the second of the posts cited above, the one about the tank car fleet, I included photos of both a TIDX car, and a TWOX car, the latter in its mid-1950s paint scheme with the Flying A emblem and the word “Tidewater” spelled out. In this post, I show models of both. But first, let me repeat the TIDX car photo (George Sisk photo, Kansas City, circa 1954, Charles Winters collection). 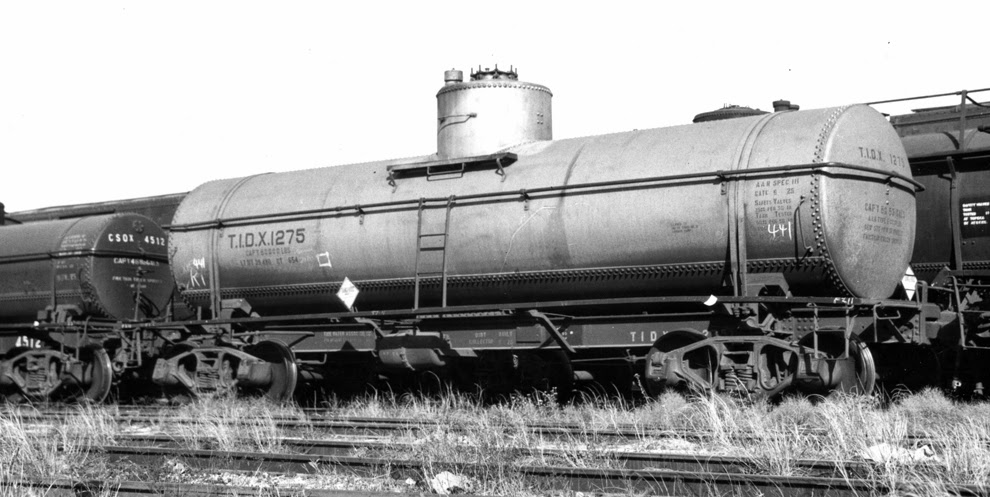 My model of this car is a brass model from Overland (no. 3130), an AC&F 8000-gallon car. Since the car above is obviously a General American car, my model has to be called a stand-in, but certainly captures the look. The placard boards above contain an unreadable placard. I gave the model an “empty” placard on one side, along with a route card (many tank cars had these cards tacked on the edge of the wood running board, but this car has a side-sill route car board). For an introduction to route cards, you can see this post: http://modelingthesp.blogspot.com/2011/11/chalk-marks-and-route-cards.html . Several succeeding posts provide more information on these cards. You can search for them by putting “route cards” in the search box at the upper right of the blog page. 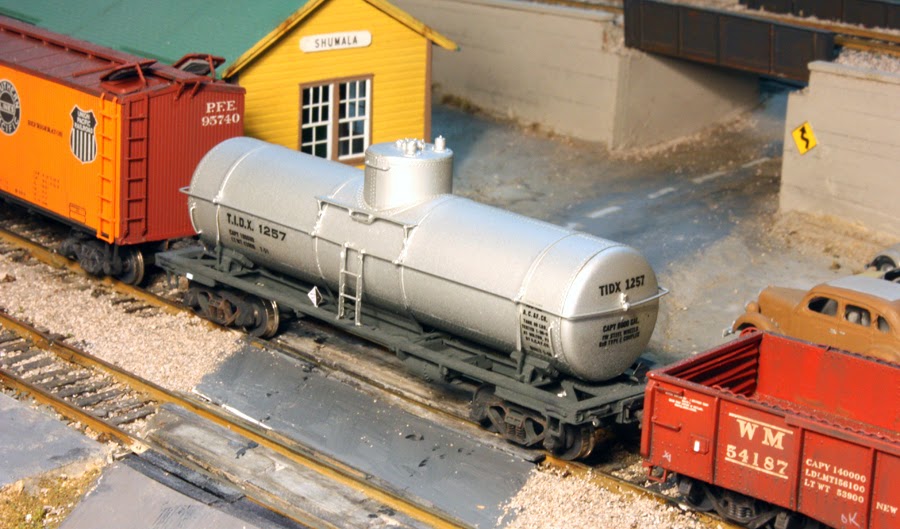 The model is shown in a train crossing Chamisal Road in my layout town of Shumala.
In the tank car fleet post, cited above, I showed a photo of a TWOX car. Here is another, from the Bob’s Photo collection, location and date unknown. 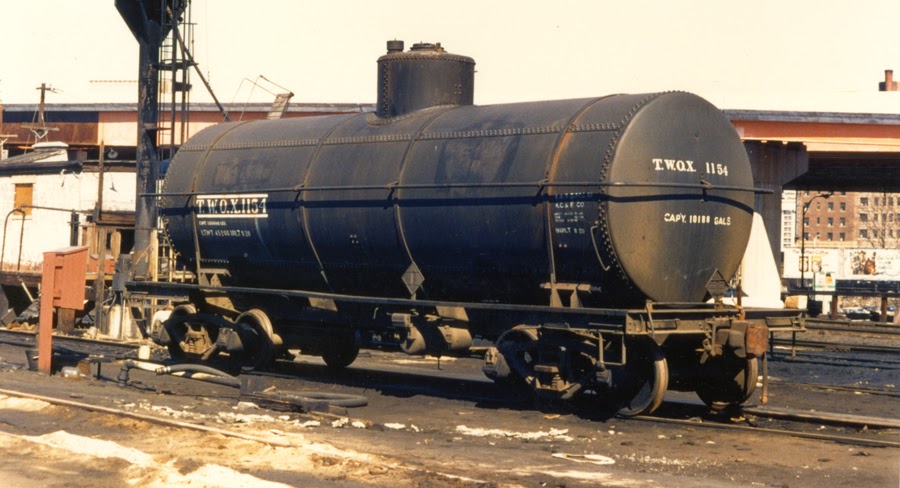 Note that this car has not received the later additions of the Flying A logo, and the word “Tidewater” over the reporting marks, all of which wee shown in that prior post.
The photo above shows a four-course tank built in 1920 by AC&F, of 10,000-gallon capacity. It thus matches nicely with the Proto2000 model of the same prototype, one kit of which was decorated for TWOX. I simply built the kit as directed, though I omitted the dome walk and ladder on the right side, consistent with the prototype photo.

Since it’s known that the Tidewater Associated fleet of tank cars was freely shared among the western (AOX), midwestern (TIDX) and eastern (TWOX) divisions, cars  with all three reporting marks, including these two models, will show up at my Associated Oil bulk dealer in Shumala.
Tony Thompson
Posted by Tony Thompson at 1:00 PM