In the previous segment of this reproduced essay about the Official Railway Equipment Register or ORER, which was Part 3 (you’ll find it at this link: http://modelingthesp.blogspot.com/2014/05/the-equipment-register-part-3.html ), the data stenciling and reweigh rules were presented. In the present post, I add the rest of the photos which were part of the original essay.
Since the photo captions refer repeatedly to the table which was included in Part 3, I repeat it here so the data are conveniently to hand.

[The following lettering photos can all be clicked to enlarge the image.
The next two photos are of Pacific Fruit Express refrigerator cars; both are details of company photos in the author’s collection. Both illustrate that ice refrigerator cars usually had light weights which were high relative to their nominal capacities. The first photo shows steel car PFE 45025, with Code C axles, and a load limit scarcely higher than the nominal capacity. This photograph of the new car was taken at Pacific Car & Foundry’s plant.] 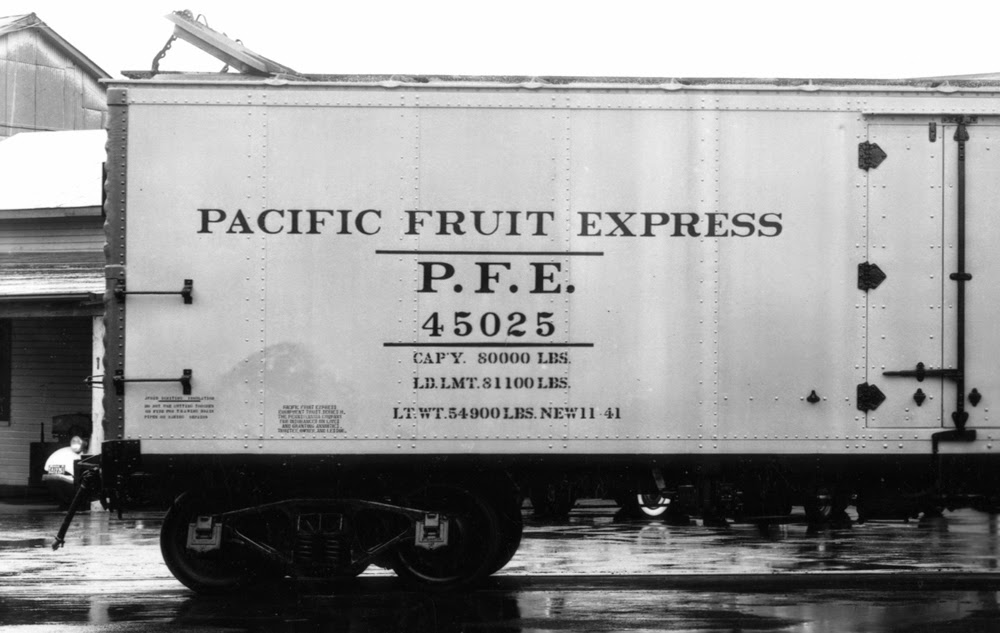 [The second PFE photo is an example of a car with a load limit determined by the structural capacity of the underframe, instead of the maximum load on the truck axles, a possibility mentioned in Part 3. The load limit has a star next to it to indicate this situation, which means that the sum of the load limit and the light weight will be less than the maximum load on rail shown in Table 1. Wood-sheathed PFE 28063 was repainted and reweighed at PFE’s Los Angeles shop in March 1936.] 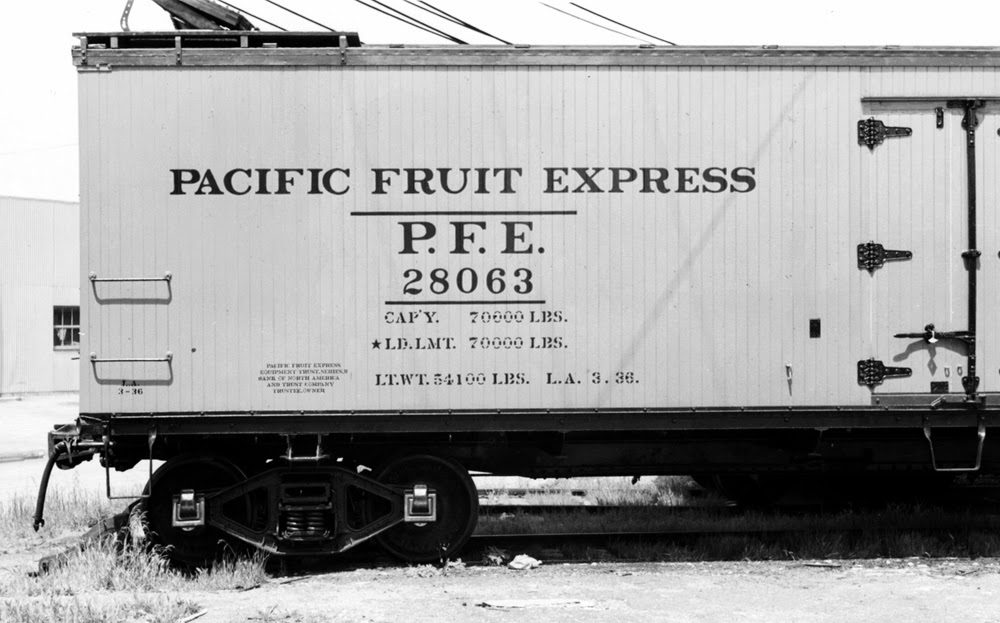 [The next example is a 70-ton triple hopper, with Code E axles, readily identified by the total weight on rail of 210,000 pounds; see Table 1. The car, built in 1946, was reweighed at Houston (station symbol HO) in June 1958. It belonged to the Texas & New Orleans, an SP subsidiary. Its dented sides testify to hard use. This is a detail of a Bob Lorenz photo.] 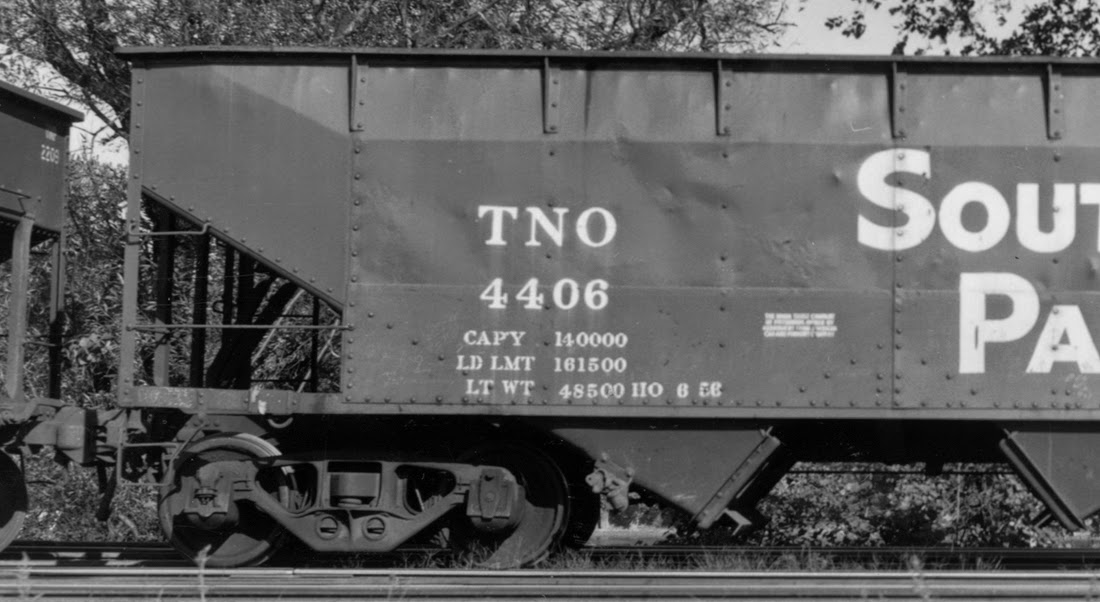 [Flat cars often carried considerable steel in their deep center sills, and consequently could have light weights nearly as large as some box cars. This Western Pacific flat car, WP 2419, is an illustration, with a light weight of 44,400 pounds. It has Code D axles. AC&F photo, from the National Archives of Canada, negative PA 186379.]

[In contrast to the flat car above, here is an example of a car with a rather low light weight, a stock car with Code C axles and typical light framing. Because the light weight is only 36,600 pounds, the load limit is nearly 25 percent larger than the nominal capacity. The reweigh station symbol identifies Roseville, a major SP yard. Detail of a Virl W. Davis photo, taken at Gering, Nebraska in 1957.] 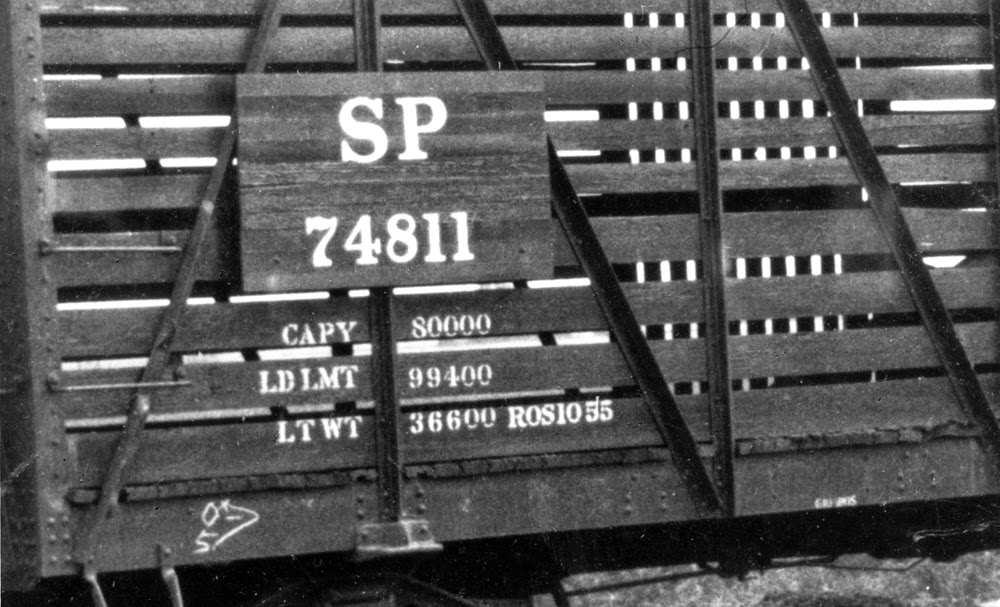 [In the 1950s, practically all cars with Code F axles were either heavy-duty flat cars or ore cars. These SP iron ore cars at Eagle Mountain, California,= illustrate the point; their light weight, 53,700 pounds, was far below the load limit of 197,300 pounds. The total weight on rail, 251,000 pounds, is shown in Table 1. Detail of SP photo.]

[Finally, tank cars are exceptions to many of the rules that applied to other freight cars, as mentioned in Part 3. The fact that their cargoes were billed by gallonage insted of weight had two consequences for lettering: first, most tank cars were rarely reweighed (the car below was built in August 1920 and that was the last time it hd been weighed, though this photo was taken in the 1950s). Second, the exact gallonage of the individual car was important for freight billing, and it was stenciled on the end of the car, as you see here, 10,188 gallons. Detail of a photo from the Bob’s Photo collection.]

“These examples should suffice to illustrate the broad usefulness of the Register as a source of freight car information, granting that there is usually some additional information which one may need to know. But the broadest of photo collections or company freight car rosters does not contain the complete dimensional, statistical and AAR class data found in the ORER. For the prototypically oriented modeler, there is no substitute for the ORER.”

This concludes what was contained in my original essay in the NMRA reprint of the January 1953 ORER, with a few changes and rewording. The complete text has been placed on Google Drive as a PDF, for anyone who wants a one-piece copy. Here is the link: