Now almost twenty years ago, the National Model Railroad Association published a reproduction of the Official Railway Equipment Register issue for January 1953. I was asked to write, and did write, an introductory essay in 1995, intended to explain what this book is, and how modelers might use it. I covered several sub-topics in this essay. I should add that the softbound version of this reprint is still available from the NMRA; go to this page:
https://www.nmrastores.com/Public_Store/product_info.php?products_id=33&osCsid=utotuo6395iuu11mmhbrmc3586 . They also sell a reprint of a 1943 issue.
However, I continue to hear modelers asking what the Register is. Accordingly, I am going to repeat my essay in the form of a couple of blog posts, to make it more available, and when the sections have all been posted, I will also put a complete version on Google Drive so that it can be downloaded if desired. In a few places, I will insert current comments or illustrations, which will be set off in square brackets, [thus]. The first section follows.


“The Register — What It Is, What It Does
by Anthony W. Thompson

Introduction
“The Official Railway Equipment Register, often called the Register for short, or sometimes just the ORER, has the purpose of listing and describing all active North American freight cars. First published in 1885, its interval of publication has varied over the years, monthly early in this century and quarterly since 1937. Interestingly, the Register has gotten thicker over the years, even as the size of the freight car fleet has steadily shrunk. This reflects the increasingly specialized design of freight cars, and the increasing use of specialized equipment in cars, requiring many more separate listings. Where once a large group of freight cars owned by a particular railroad might well be essentially identical and could be described by a single entry in the Register, today many smaller groups of specially equipped cars rate separate entries.
“What the Register is and what it does (with apologies to John Armstrong) is this: it is used by freight agents and car clerks, to identify the characteristics of freight cars, such as size (especially internal dimensions, door opening, and other aspects which affect car loading), special internal equipment, such as loading racks, and other details, such as assignment to particular service. The only identification needed for an individual car is the car reporting marks and number. Thus an empty car at a particular station or terminal could be evaluated in comparison to the needs of a shipper, and cars matched up with demand.
“This kind of search and matching process is an obvious candidate for computerization, and indeed the ORER of today is available in both the printed version and on tape in a computer-readable format. It has been speculated that the day may not be too far off when the printed version disappears.
[As it happens, you can still buy the print version; visit: https://ubm-sub.halldata.com/site/UBM000452LOnew/init.do ]
“Each issue of the Register thus contains a very complete and detailed description of the freight car fleet of each railroad for the period of the issue’s cover date. The description covers all car numbers, revenue car types, and every important dimension and major characteristic. The listings of cars in each Register reflect considerable effort by the individual railroads to be accurate. There were legal and regulatory consequences of errors in these listings, so although errors did occur, they were fairly rare. This accuracy extends to all the dimensions, down to fractions of inches, for each and every car.
“Yet modelers quickly find that there are pieces of information about cars which are not included. These include the built date, any indication of whether and when the car was rebuilt, and some capacity information such as the empty or light weight. These items are not included, of course, because they do not affect usage of the car by shippers, even though they are quite relevant to freight car history and lettering. When such information is needed, other sources such as car rosters or photographs must be consulted. Also, in earlier days, passenger equipment was included in the ORER, but starting in 1943, a separate Register of Passenger Train Equipment was issued. Some smaller railroads have listed non-revenue or maintenance equipment, but such listing was not required and was not widespread. The roster is thus not a source of all information one might want, but it is an essential source of the kinds of freight car data which are included. A brief summary of modeling uses for the Register is given in the following section.

Modeling Use of the Register
“There are two primary uses of the information in the Register by a modeler. The first would be to determine the characteristics of a car for which the car number is known. The known car may be a pre-lettered scale model or it may appear in a prototype photograph. The Register immediately provides the car type, car length, and other dimensions such as size of the door opening for a box car. With a little additional knowledge of freight car history, this can lead to still more insight. For example, imagine that youhave a photo in which you can see just the end of a house car, enough to read the car number and see that it is a steel Dreadnaught end. There’s no way to determine the car length, or whether it’s a box car, auto car, stock car, or whatever. Let’s see what the Register can provide.
“The car end lettering reads OWR&N 188371. Not being familiar with these reporting marks, you turn to the Index of Railroads in the front of your Register and discover that it stands for Oregon Washington Railroad and Navigation Co., a subsidiary of the Union Pacific. In the UP listing, you find the group of cars you want, numbers 188300-188999. These were all-steel 40-ft. box cars with 6-ft. doors, already much more information than you could tell from the photo. You also note the 10-ft. inside height of this car and the cubic capacity, 3705 cubic feet, which in combination strongly suggest that this is the 1937 AAR box car design. That’s quite a bit of information from a reporting mark alone.
“However, there are additonal things you might like to know that are not evident here. For example, you can’t be certain from the listing alone that this is a 1937 AAR car, nor can you tell what kind of doors, or lettering style, or actual built date, are correct for the car. For those things, you would need more photos of one of these cars, or you would consult an authoritative reference on UP freight cars, such as the book Union Pacific Freight Cars 1936-1951, by Terry Metcalfe.
[Here is the cover of Terry’s excellent book. Though long out of print, it can be purchased used from on-line booksellers.] 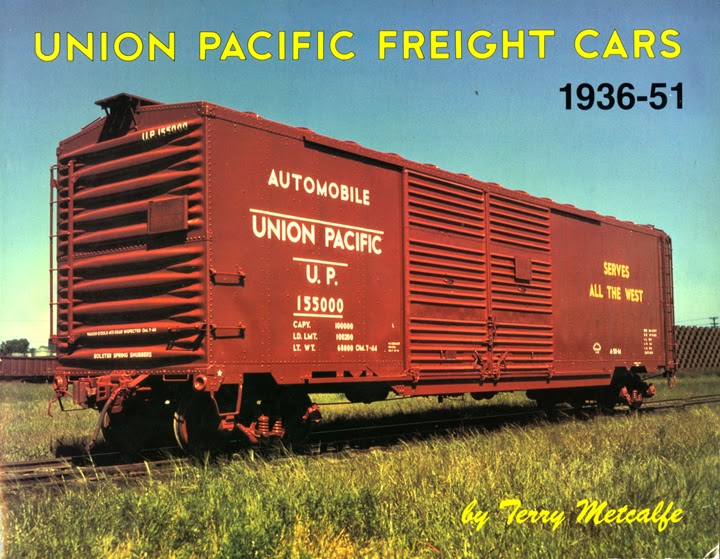 There you would also learn that this car was a member of UP’s Class B-50-24, part of a group of 1900 cars built in 1939 in three different UP company shops, and you would find excellent builder’s photos and other information about the cars. But you have a very good start from the Register information.
[Here is a builder shot representing the OWR&N cars, built at UP’s Albina Shop in Portland, Oregon. It is a UP photo, from the Terry Metcalfe collection, and appears in the book just cited.]

“The second common use is to determine car fleet characteristics for a particular railroad. For example, perhaps you are curious about the Montour Railroad. The ORER listings aren’t alphabetical, but are roughly grouped geographically; it is usually fastest to start with the Index of Railroads at the front of the ORER. Turning to the listing for the Montour, you can learn its operating location (Coraopolis, PA) and all its interchange points, as well as the fact that it rostered only hopper cars. Thus that mill gondola that you were tempted to letter for the Montour won’t be prototypical. That may not affect your lettering decision about the model, but at least you know what you’re choosing to do. And if prototype accuracy is one of your goals, you need to look for another protoype for that mill gon.
“Another aspect of this same usage would be to determine the proportions of a particular railroad’s car fleet. Each car type (box, flat, stock, etc.) is separately listed and totaled, as well as the overall fleet total for the railroad, permitting a simple calculation of such facts as that the Southern Pacific fleet was 57 percent box cars. If your question about that mill gondola involves finding a railroad which owned a high proportion of such cars, the ORER is a good place to look it up.”

This is the first section of my essay, and clearly sets out how the ORER may be used. I will continue with following sections presently.
Tony Thompson

Posted by Tony Thompson at 8:53 AM