In my first post on this topic, I presented the background of the Associated Oil Company through its history. That post can be found at this link: http://modelingthesp.blogspot.com/2013/12/associated-oil-company-background.html . In the present post I provide more information about the tank cars of Associated (and of Tidewater Associated).
Some of the history of Associated’s tank cars can be found in my book about SP tank cars, because of the exchange of cars between SP and Associated in the years 1906 through 1920. The book is Southern Pacific Freight Cars, Volume 5, Hoppers, Covered Hoppers, and Tank Cars, Signature Press, Berkeley and Wilton, CA, 2008, and I will just refer to it as “Volume 5.” Chapters 10 and 11 include mention of these SP–Associated connections, and also of interest might be the sidebar I wrote on “Early California Oil and Tank Cars,” pages 202 and 203 in Volume 5.
in 1902, American Car & Foundry built 40 tank cars of 9500-gallon capacity for Associated Oil, very similar though not identical to Santa Fe Class Tk-E tank cars being built at the same time. These cars are illustrated in Volume 5, pages 250 and 251, after their transfer to SP in 1906. The cars were numbered 101–179 (odd numbers only) while in Associated service. Whether these were cars purchased by SP and leased to Associated is not known, but they did come back to SP in 1906. That was the year that Associated received 300 cars of Common Standard design, Class O-50-2, a car of 12,500 gallons capacity.
These 300 cars are interesting, because the original Harriman Lines order to Pressed Steel Car Company was for 725 cars (SP 50250–50974). Also ordered were 245 cars for the Union Pacific system. Within a few months the SP order was reduced to 625 cars by reducing the highest car number to SP 50874. But before these cars were placed in service, 300 were diverted to Associated, where they were numbered 153–452 (Associated also owned some 40 cars of 8000-gallon capacity at that time). Presumably Associated purchased these 300 cars from SP. The SP cars which Associated got were drawn from various part of the SP number series, leaving several gaps in car numbering which are very obvious in SP car ledgers.
Here is a photo of a Class O-50-2 car, from the 1913 SP valuation photography series. It is not quite in original condition, as the diagonal tank hold-downs from each end have been removed. This SP photo is from the Jeff Root collection, and the written legend was made on the negative.

Associated Oil does not appear in the Official Railway Equipment Register or ORER until 1911, so these cars can’t be traced prior to that year, except through some SP records. And as late as January 1920, Associated still rostered 340 cars, the same 300 cars of 12,500-gallon capacity just described, and the 40 cars of 8000-gallon capacity. The latter group, numbered 113-152, evidently includes car AOX 147, shown in the previous post (cited at the top of this page).
But after the return of 75 of the O-50-2 cars to SP in 1920, and disposal of others, the Associated fleet decreased in size, to 255 cars in 1925, and to nearer 100 cars in the late 1920s. And incidentally in 1920, Tidal Gasoline of Tulsa, Oklahoma, using the reporting mark TIDX, rostered 60 cars, most of them of 8000-gallon size. By 1925, these TIDX numbers had grown to 550 cars.
By 1930, Associated only listed 85 cars in the ORER, 75 of them being 8000-gallon cars and only 10 of the old 12,500-gallon cars. By that time, Tidal Gasoline had become Tidal Refining and the TIDX listing comprised 1284 cars, almost 200 of which were leased cars. About this time appeared the first listings under the TWOX reporting mark, identified as Tidewater Oil Sales Company, 319 cars.
In 1935, AOX’s fleet remained about the same as in 1930, but TIDX had decreased to 949 cars and TWOX listed 521 cars. Of course, by this time all three entities had been controlled by the Tide Water Associated Oil holding company for ten years. That was first reflected in the ORER in July 1937, when all three reporting marks were gathered under Tidewater Associated Oil Company (the full merger had taken place on November 30, 1936). 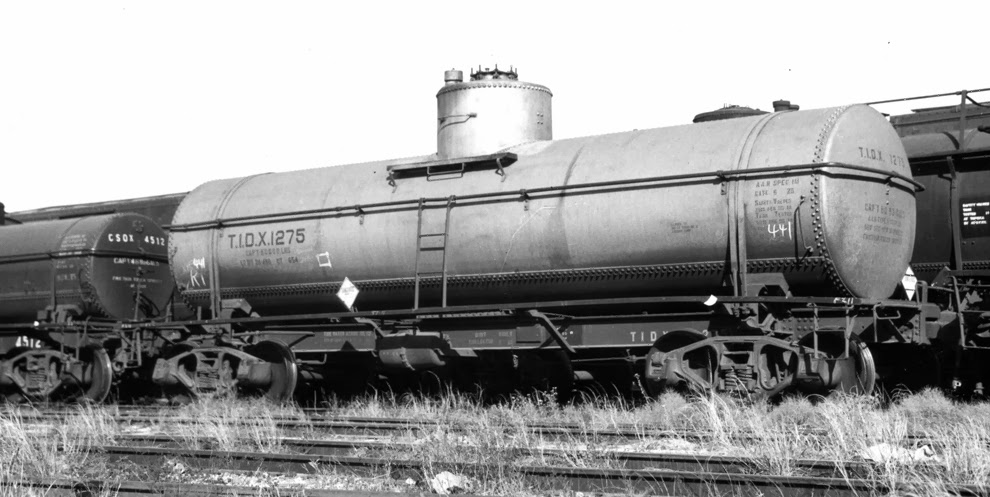 Like every photo I have ever seen of a TIDX car, the one above has an aluminum-painted tank and very plain lettering. In earlier days, they used one-inch stripes above and below the reporting mark and car number, but obviously that was discontinued by the time this General American car was photographed. This George Sisk photo was taken at Kansas City about 1954, is from the Charles Winters collection, and is used with permission.
In 1953, the year I model, the total Tidewater Associated fleet was 1249 cars, without indication of exactly how many in each component reporting mark; but it does appear that around a third of the cars were AOX cars. And Associated still showed two of the Class O-50-2 cars in its roster!
In the previous post (cited at the top of the present post), I showed a photo of an Associated car taken in 1955. Here is another photo, taken by Wilbur C. Whittaker in the 1940s, showing an older lettering style. This is an 8000-gallon car.

The addition of the word “Tidewater” to the company’s tank cars appears to have taken place in the mid to late 1950s. This vivid example, an AC&F car photographed by Chet McCoid in Providence, Rhode Island on October 11, 1957, clearly shows the much cleaner white of the word “Tidewater” and of the Flying A emblem. The photo is from the Bob’s Photo collection and is used with permission. 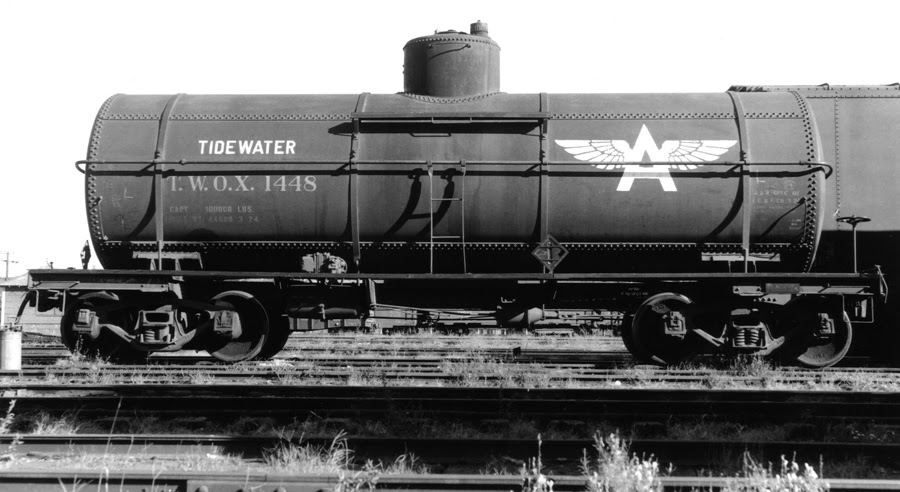 These images do suggest some modeling needs, for both General American and AC&F tank cars, and for decals to letter them. I am working on artwork to do just that.
Tony Thompson

Posted by Tony Thompson at 9:47 AM