Covered hoppers can be unloaded in a variety of ways, most relying on gravity to move the cargo through the bottom outlets. The outlets can dump into a bin below the tracks; into the receiving opening of a auger unloader; or into a receiving transfer arrangement into highway trucks or trackside bins. All these method may rely in part on auger components, simply a screw rotating inside a tube, as shown below. Naturally rotation of the screw moves material along the tube. 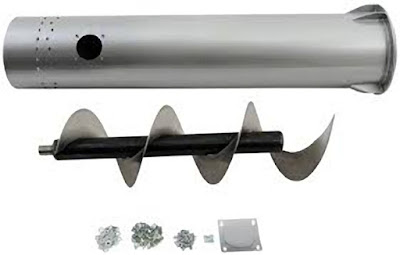 The choice among the unloading options just listed depends in part on the product being unloaded, and on the scale and frequency of the unloading to be managed.
Car unloading can involve simply dumping into a pit below the tracks, and the mechanism for moving the cargo from the pit can be anything from an auger to a conveyor belt (below ground, of course). Thus a grid or array of bars between the rails can be a complete unloading arrangement if desired (and if the destination is into a structure). It might look like this: 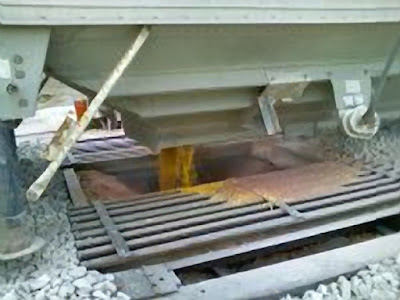 But there are also a variety of ways that an auger mechanism can be arranged and be evident from above. One of these is with a portable auger, than can be moved from car to car, for example unloading into trucks. These can be quite steep, more so than a conveyor belt: 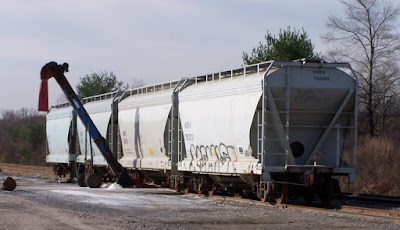 But what I want to do on my layout is indicate an unloading spot, and rather than just make a dump pit, I want to indicate directly that there is an auger mechanism. My idea to do this was inspired by a Clark Propst clinic about his own layout, in which he showed a photo of such an auger in a 1949 photo of a cement company, with the receiving bin visible above the auger in the track. Clark was kind enough to send me a copy of the photo, which looks like this: 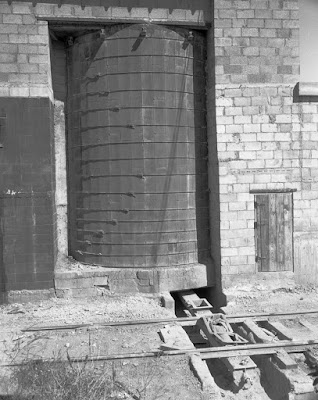 The unloading spot is quite narrow and the means of connecting the car unloading gate to the auger box is evident. Here is that area, expanded from the photo above:

Note that there is a flat top to the device, but that the round auger tube underneath can be seen, as can the shaft end of the auger itself.
I am going to try and model this, and will take up that project in a following post.
Tony Thompson
Posted by Tony Thompson at 11:26 AM