In the previous post in this series, I showed how I have modified various published labels for shipping boxes, and a few labels from my own collection, so that the product named on the label, along with the name of a packing house on my layout, fit their use on my layout. The most recent of those posts was the preceding one, Part 5 (you can find it at this link: http://modelingthesp.blogspot.com/2017/11/produce-shipping-boxes-part-5.html ). The subject of modifying existing labels from various sources was introduced at the very beginning of the series, in Part 1 (that post can be found here: http://modelingthesp.blogspot.com/2017/08/produce-shipping-boxes-in-ho-scale.html ).
I have had several requests to expand on my box label modifications and show more examples. I have continued to work on these, in part because I am still not sure which ones will ultimately work best in HO scale. But I do know to focus on the ones with really bold lettering or graphics or both, so that they can stand out in a very small size. Here is one example, originally a box label for Valencia oranges: 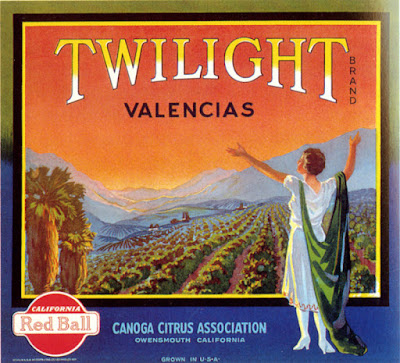 The conversion involved removing the lettering for oranges, along with the “California Red Ball” emblem from Sunkist, and of course the packing house name, Canoga Citrus Association (the stated location, Owensmouth, later was renamed Canoga Park), and replacing with my Guadalupe Fruit name. 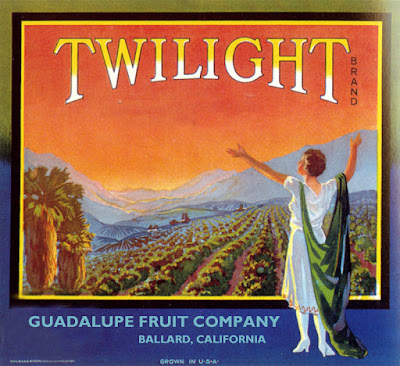 This is a bright color and large graphic look, thus I expect it to work well in HO scale.
Most of the label producing companies offered a label style which did not feature the packing house name, but simply showed a brand image. These could readily be overprinted with the packer’s name if desired. Here is one example of a bold graphic image, with the packer name hardly evident (it is along the label bottom; you can click on the image to enlarge it). 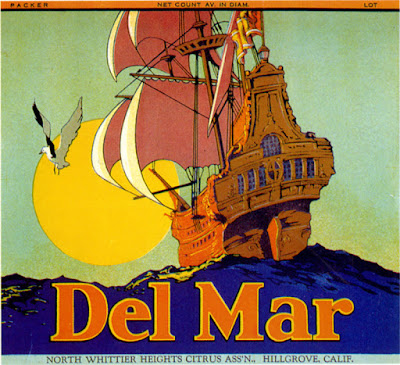 It is easy to simply remove the packer lettering and not replace it, since it would be too small to read under almost any circumstances. This label could then serve on shipping boxes for any of my packing houses, since it doesn’t identify either a house or a type of produce.
There are some irresistibly handsome citrus labels in existence, and I just had to do another one of these for my lemon packing house, the Coastal Citrus Association. Here is the original label, which in fact was used for lemons: 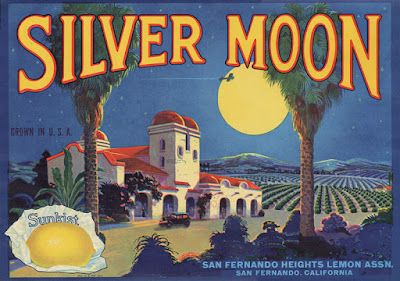 Note, again, that this label has really bold lettering, and the large yellow moon image to make it even more distinctive. This one only required me to rearrange the letters in the existing name, San Fernando Heights Lemon Association, to make the name of my layout house, and then to do the same to the place name to convert it into the town name on my layout, Santa Rosalia. Here is the result. 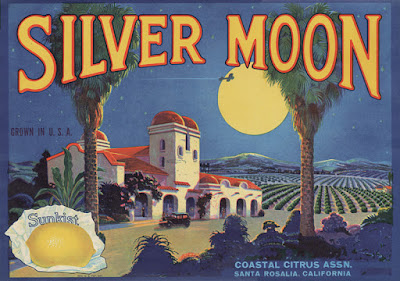 These are fun to do, not at all difficult, and will likely serve my needs on the layout. I will return to the use of these in HO scale in a following post.
Tony Thompson
Posted by Tony Thompson at 10:12 AM