More about operating with “sure spots”

I introduced the topic of operating on a model railroad layout with “sure spots’ in a post last year, with the idea of showing some ways these spots can be identified (see this link: http://modelingthesp.blogspot.com/2016/08/operating-with-sure-spots.html ). To repeat the definition of a sure spot, it meant spotting the car at one particular location at an industry, such as on a particular track within an industrial complex, or at a particular loading dock, or alongside a particular loading door or unloading appliance.
When I first had operating sessions on my layout, I didn’t worry much about this, intending only that switch crews get the right cars to the designated places. And of course I assumed that elementary logic would dictate that car doors kind of line up with loading docks or building doors, and that tank cars line up with unloading hoses, and so on. It didn’t take long to discover that “elementary logic” is sometimes in short supply, especially if crews feel rushed. I do tell my operators the widely-used mantra, “this operating session is not a race, so take your time,” but people often feel that they are expected to finish in minimum time, and thus rush ahead in spite of that mantra.
When I researched how prototype sure spots are identified, I introduced both schematic maps of each town, including the sure spots (as you can see in the post cited in the first paragraph, above) and also began to put them on some waybills. I had learned from experienced railroaders that sure spots are sometimes called out on waybills, especially when a shipper repeatedly sends a particular cargo to a consignee; the consignee will notify the shipper how they want the cargo delivered. Also, a consignee may let the local railroad agent know what spot they want, and the agent can tell that to the local crew when they arrive (I use agent messages for such information; see: http://modelingthesp.blogspot.com/2015/06/operating-with-agent-messages.html  ).
Barring the waybill designating a sure spot, or the agent transmitting that information, the crew may simply arrive at the industry and send a brakeman to talk to the dock foreman to find out where he wants the car. But this is a little harder to include on a model railroad. Finally, the crew ordinarily knows from experience what is going on at an industry, and knows, for example, that top-unloading tank cars always are spotted by the unloading equipment for such cars. But I wondered how to convey this kind of knowledge to my local switching crews,
Before the VanRail operating event last September, a number of us en route to Vancouver, B.C. had a pre-event operating session on Al Frasch’s excellent layout on Whidbey Island. Al has a kind of information card for each industry or industrial area, which I found very helpful when operating, and inspiring as an idea for my own needs. With Al’s permission, I will show a couple of his cards. 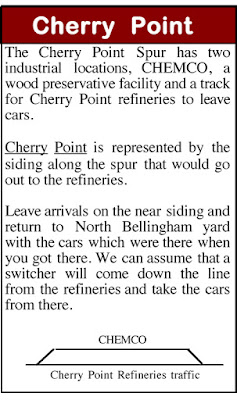 I like this one because it is similar to a situation I have on my layout, where an industry has a plant switcher. That means that the branchline locals only pick up and set out cars on the lead into the plant, and switching within the plant is handled by the plant switcher. This is exactly what Al has described for his Cherry Point refinery.
Another of his cards also mirrors a situation I have, in which particular unloading doors are assigned to particular products. His is a wholesale grocer, Pacific Fruit and Produce: 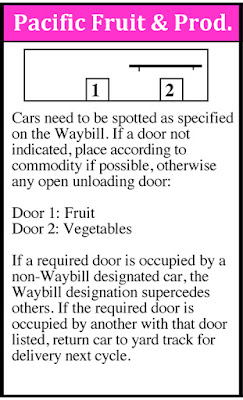 I decided to try creating some cards along these lines for my own layout. Though with some reservations about the rather electric magenta header of the example above, I decided to try it out, with this result. 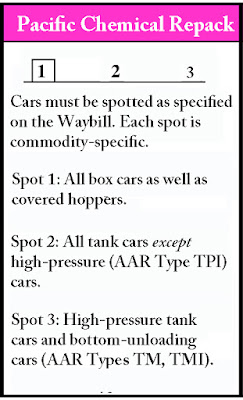 My Pacific Chemical Repackaging industry does have specific spots for certain kinds of loading and unloading, and the three spots are defined here. Note that only Spot 1 is at a building. But I am not quite satisfied with the language, and will continue to work on this one, as well as creating others.
So although this idea still needs development for my layout use, as I see it, I am definitely grateful to Al for the stimulus to work on this problem. I hope to get some “information cards” like these into the hands of my operating crews one of these days. Further progress will be reported as it happens.
Tony Thompson
Posted by Tony Thompson at 10:05 AM