Last summer, I showed the work I was doing to upgrade some of my existing freight cars, namely Red Caboose or Innovative Model Works 40-ft. Southern Pacific box cars. These model cars had wood running boards, though the prototypes in SP’s late-1930s box car classes in fact were built with steel grid running boards. I applied the Kadee parts instead, as I showed in a brief post (you can see it at: http://modelingthesp.blogspot.com/2017/06/small-project-upgrading-running-boards.html ). Now I need to do the same for some automobile cars. The idea to do so was stimulated in part by the comment to me by a couple of experienced modelers, that they didn’t know Kadee sells a 50-foot running board as a detail part.
Here’s the background. In January and February of 1941, a class of 50-foot automobile cars, Class A-50-14,  was delivered to SP. These 500 cars had the recently-introduced W-corner-post Dreadnought ends, and 10-foot, 6-inch inside height. They were also the first SP automobile cars with steel-grid (Apex) running boards, and all were delivered with Equipco hand brakes.
The nearest model to the SP cars is the Proto2000 automobile car. It has the right doors, roof and ends, and also the correct pattern of side panels (four panels to the left of the double doors, six panels to the right). Overall, this is a pretty accurate car for SP modelers. But the car does fall short in a couple of specifics. It has a wood running board and Ajax hand brakes, both of which are not accurate for the SP cars, though readily corrected. I will fix both those features in the project described here.
The Proto2000 car also has single rivet rows securing each side panel, while in fact the SP cars had double rivet rows (one row with double the spacing of the other row). Such double rows are an indication of the use of hat-section internal posts instead of angle-iron posts; the hat-section posts made for a stiffer superstructure. As my models are painted and decorated, and in most cases already weathered as well, I will not be adding the additional rivet rows to make these cars more nearly correct.
The first step in this project is to remove the incorrect “wood” running board and the brake wheel. This is easily done by sliding a razor blade underneath, and simply slicing off the attachment posts of both the board and the brake wheel. I use lots of these single-edge blades for a multitude of modeling tasks.

Once the old running board is removed, as you see below, the clean roof is ready to accept the Kadee Apex 50-ft. running board, part no. 2011 in boxcar red. The car below is not yet weathered.

The running board was attached with canopy glue.
An omission from the Proto2000 auto car models is the route card board. You can see its location on the right-hand door in the prototype photo below, from the book, Southern Pacific Freight Cars, Volume 3: Automobile and Flat Cars (A.W. Thompson, Signature Press, 2004). This is a detail of a photo in the Steve Peery collection.(You can click on the image to enlarge it.) 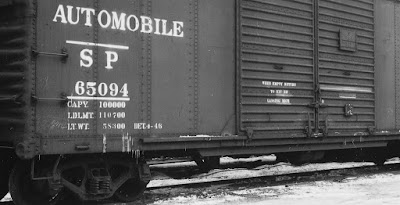 I added one of these boards (shown in a prototype drawing at this link: http://modelingthesp.blogspot.com/2012/01/route-cards-7.html ), by simply gluing on short lengths of scale 1 x 6-inch styrene strip.
The Proto2000 brake wheel, an Ajax type, is incorrect  for these cars, and was sliced off. It was replaced with the right brake wheel, an Equipco, Kadee part no. 2021, just one member of the excellent brake wheel selection from Kadee. (By the way, you can see the Kadee parts selection at their on-line store:  https://kadee.com/store/index.php?main_page=index&cPath=104_119_123 .
With all those changes, and touching up the paint on the route card boards, my unweathered model looked like this:

I am gradually correcting my various Red Caboose, IMWX and Proto2000 models which were produced with wood running boards but should have metal ones. For the cars that should have Apex running boards, whether 40-foot cars or 50-foot cars, the Kadee parts provide a very easy fix. I am also correcting hand brakes where necessary, along with other details like route card boards. In most cases, I also replace fragile plastic sill steps with metal ones. It’s all part of being consistent about freight car standards.
Tony Thompson
Posted by Tony Thompson at 11:20 AM