In the previous post on this topic, I held forth about the range of modeling levels that anyone might have to assess. I mentioned an example of a superb, national-NMRA-contest-winning model, Larry Kline’s B&O War Emergency hopper car in O scale, with working hand brakes. And I contrasted it with an old-school, out-of-the-Blue-Box Athearn box car. That should set a range for you.
My point was that in an operating session, the focus is primarily on any car model as a “board game token,” and only secondarily on it as a fine model. Here’s a link to that post ( https://modelingthesp.blogspot.com/2020/08/layout-models-and-all-that.html ). If I may be permitted a modest exaggeration to make the point, below is a view of a literal board game (Hasbro’s Monopoly) that could in some ways be seen as like a layout operating session (photo: Erika Wittlieb, Pixabay) — making the models secondary to the prescribed car movements. 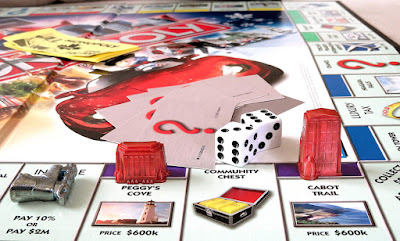 Of course I exaggerated in the previous post, in drawing the contrast between a spectacular modeling accomplishment like Larry’s hopper car, and totally stock Athearn Blue Box models, because obviously there is a huge range in between. That in part is what the “freight car guy” posts have been about. My starting point today is to hark back to when I was recruiting and training judges for the NMRA model contests.
I will begin with what I used to tell beginning contest judges, to help them focus on the category they were judging. I said something along the lines of, “Remember that when you look at the model, you are looking at its outermost skin, its paint, lettering, weathering and overall finish. It may be beautiful, and make you love the model, but unless you are judging the Finish category, look beyond, and even try to ignore, that finish. Don’t let the finish dazzle you.”
Of course, that seems to say that finish misleads you as a judge, and it can. But for layout models, it is much the reverse. Finish becomes your friend. Your first goal, I would suggest, should be to  make the model “look good,” whether you lean to weathering or gorgeous paint schemes or whatever. I maintain that in a passing train, you don’t have the chance to scrutinize any of the cars (though you may be able to evaluate the ones you know best). Finish is what you see, not necessarily the correct door on that box car, or the right brand of handbrake on that gondola.
Here’s an example, a LifeLike tank car copying the old Varney design. The manway on the dome top is quite oversize, the sill steps are gross, and for some reason there is a raised band along the top of the tank. But add a vertical-staff handbrake, paint it black, letter simply, and weather, and you have something that in a passing train will not look out of place.

I am most certainly not advocating the free use of crude or bogus models. As one might state the point, a little bogosity is invisible, moderate bogosity may be acceptable, and it’s a slippery slope after that. Every modeler (in effect) decides with every single model, how exact it needs to be, and how much “error” is acceptable.
That’s why, in some of my “freight car guy” blog posts, I have shown cars that in fact fall short of their prototypes, but will look all right on a layout where contest-quality freight cars are, shall we say, not numerous. Of course the better the model quality in the freight cars, the better for the layout; but where is the cutoff? That’s what we all effectively decide when we put one car on the layout, while keeping another off the layout.
Let me hasten to add that I do have and operate some high-quality models of which I’m very proud, some built by others and some built by me, such as the paint-patched Ferrocarril del Pacifico box car featured in a recent post (see it at: https://modelingthesp.blogspot.com/2020/09/resin-box-car-build-part-3.html ). So these are part of the mix too, even if they would not fall into the category of mere “layout models.”

Modeling of anything, from scenery to locomotives to highway vehicles to freight cars, is always going to be spectrum of results. Decide where you want to be in that spectrum, and do your best to stay there. But always remember that the finish on a model makes far more of an impression than anything else about that model.
Tony Thompson
Posted by Tony Thompson at 11:35 AM