In 1902 the Southern Pacific, under Harriman administration, acquired the Cananea, Yaqui River and Pacific Railroad, and began construction near Guaymas, Mexico towards Guadalajara. In 1909 this and other properties, such as the Sonora Railway, were consolidated into a new corporation, the Southern Pacific Railroad Company of Mexico (often referred to as SPdeMex from the Spanish name, or by its reporting marks, SPdeM). It was not until 1927 that the 1095-mile line from the border at Nogales to a junction with the National Railways of Mexico (NdeM) at Guadalajara was completed.
Much of the equipment of the SPdeM was handed down from parent SP, locomotives and rolling stock in particular. The line was never very profitable, and in 1951 SP decided to sell it to the Mexican government. The sale was completed on December 21, 1951, and the entity which took over the railroad was named the Ferrocarril del Pacifico (Pacific Railroad). Not only the railroad, by then totaling 1227 miles, but all the facilities, supplies and equipment were included in the sale, and SP even added a number of older freight cars and locomotives, not SPdeM property but surplus on the parent railroad, to enhance the sale.
As a 1953 modeler, this changeover has implications for my freight car fleet. Although the new F del P (or FCP, as it soon became) naturally began to repaint and re-letter locomotives and rolling stock, understandably this took time. Thus I could certainly justify a freight car lettered SPdeM on my layout, but might like to show a “patched“ or partly relettered F del P car instead. What did these look like? Shown below is a former SP Class B-50-13 box car, relettered for F del P by the simple expedient of painting out the “S” in SP and replacing with “F del.” All other lettering items, including car number and all dimensional data, are unchanged.

The photo was taken a Guadalajara, Mexico on April 15, 1952 by C.W. Witbeck (Cyril Durrenberger collection), Note that this is not a former SPdeM car, but clearly was one of the SP cars included in the sale, because the initials being repainted were clearly SP, not SPdeM. To see this repaint more clearly, here is an enlargement of the reporting mark area of this car. Note also the reweigh data replacement. 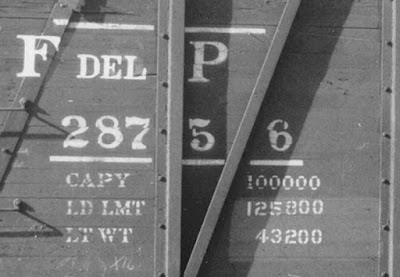 Before long, the F del P set up its own number series for car classes, as well as gradually replacing the “F del P” initials used at the outset of the railroad, for the simpler mark FCP. Here is another of these former SP cars, this one from SP’s Class B-50-14, relettered to FCP;

This photo was taken at Guaymas, Mexico in 1958 (Arnold Menke collection).
If any original SPdeM cars remained by my modeling year of 1953, they had one of several paint schemes, of which the photo below is just one example, but this would be the appearance I would try to achieve if I did any SPdeM cars for my car fleet (detail of J.T. Haug photo, courtesy CSRM). 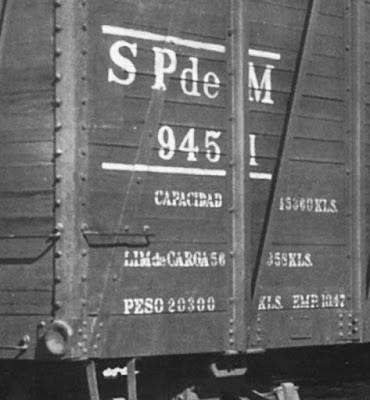 This is the background of the change in the former SP Mexican railroad property, which I want to capture in any Mexican cars I would model that are appropriate for 1953. More on modeling in a future post.
Tony Thompson
Posted by Tony Thompson at 7:42 AM