Recently I wrote four posts to present prototype examples of freight car route cards; the most recent contains links to the prior series. It is at this link: http://modelingthesp.blogspot.com/2016/07/route-cards-part-14-still-more-examples.html . The present post contains additional examples, cards sent to me by John Holmes. I appreciate John’s generosity in making these available.
I want to begin with an interesting pair of cards, as they are from the same freight car, Milwaukee 14304, and are destined to a Cadillac dealer in Santa Ana, California, named McLean Motors (they unloaded at a team track).  The card on the left is a New York Central card, Northern District, originating in Detroit, Michigan. It shows routing as Rock Island–Southern Pacific beyond NYC rails, which leads me to believe the second card, on the right, is an SP card, likely switching job or district no. 44. MILW 14304 was a 50-foot automobile car (double doors) equipped with auto racks, AAR Class XAR. 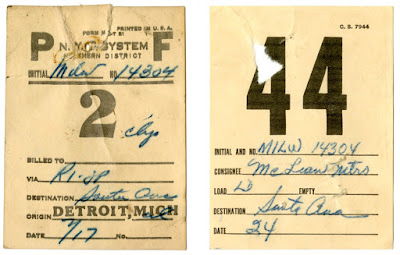 These two cards are exactly the same size, 3 x 4 inches.
Another interesting pair is shown below, The card at left is evidently a Milwaukee Road card and directs the car, MHLX 80093, from Milwaukee to AT&SF, which would take the car to California (again, destination Santa Ana). MHLX is a leased Miller High Life car, and the cargo, as the card shows, was beer. On the right is another New York Central card from Detroit, this one coded 5A instead of code 2 as in the above case. The card is preprinted for the line “billed to” as Joliet, Ill., but that has been overwritten with pencil and the word Streator (Illinois?) written in. 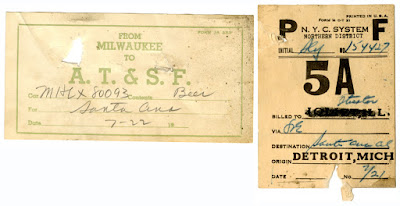 For these next two cards, we again have an interesting pair from the same car. The one on the left is a Missouri Pacific card, applied in St. Louis, to an SP box car, no. 129281, carrying merchandise. It identifies the destination as Pueblo, Colorado. The card at right is a Denver & Rio Grande Western card, interesting with a "red ball" printed in green, probably identifying a priority load. Unfortunately, we don’t have a consignee or cargo description. This larger card is 4.5 x 6 inches in size.

All six of these cards are interesting in and of themselves, and give us additional windows into prototype route card practice, when viewed in combination with the several prior posts that showed cards from the Ralph Heiss collection.
I recently received another question via email, relating to route cards, as to whether old cards were left on the route card boards, and new cards simply nailed or stapled over them. The answer, from men who worked in yards, is “yes.” As one put it, there was no time to mess around with old cards. This makes, then, an interesting modeling opportunity, to place visibly overlapping or torn cards. The following example is built from a C&BT Shops kit, modified to represent Santa Fe Class Bx-44. You can click to enlarge and see the two route cards on the door’s route card board. 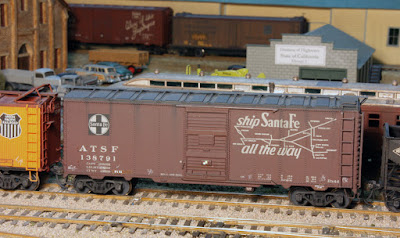 The route cards are just small paper rectangles.
Here is another model example, a wood-sheathed GS gondola. On cars like this, car clerks did not have to locate the cards they were  placing, on a particular route board, but could attach them anywhere on the wood sheathing. A location near the left bolster was common. Here one of the cards is represented as being partially torn off and thus not rectangular. 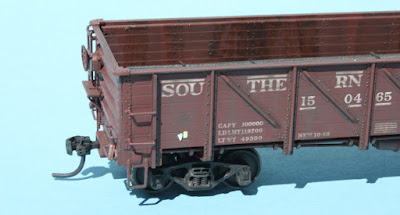 I continue to put representations of route cards on most of my freight cars, based on the observation by both Richard Hendrickson and me that at least 90 percent of freight cars in prototype photos do have the cards (except, of course, brand-new or freshly outshopped cars). I think they add both an interesting detail and a touch of realism.
Tony Thompson
Posted by Tony Thompson at 10:33 PM