Adding to the car fleet

From time to time, I add to my freight car fleet, even though I have more cars already than can populate the layout, by a factor of probably four. why would I do that? Thoughts on this question are the content of this post.
I have written a few comments previously on this subject. For example, in one post in 2011 I discussed the tension between acquisitions for collecting and for operating (see it at: http://modelingthesp.blogspot.com/2011/08/collecting-vs-operating.html ). I expanded on those remarks in 2014 with some more general discussion about how one might evolve or “home in” on a car fleet for a specific layout plan (that post can be found at: http://modelingthesp.blogspot.com/2014/05/moving-from-collecting-to-operating.html ). Here I want to return to these topics with a little bit of additional perspective.
Previously I divided freight car acquisition motivations into two kinds, collecting and operating. But I think there are really two more aspects. The first of these, for simplicity, can be called “fun.” I know I have occasionally bought a car just because I liked it. It wasn’t needed for operation and didn’t add to any particular collection (unless the entire car fleet is regarded as a collection). Especially with ready-to-run cars (R-T-R), getting the full paint scheme without work (other than weathering, maybe changing couplers, fixing the reweigh date, etc.) is just too tempting.
The second additional aspect is modeling challenge. I have certainly undertake projects which were cars not needed for operation, not forming part of a collection, and not necessarily fun. But they were intriguing modeling projects. I have even undertaken kit construction or kitbashing for cars where a R-T-R car is available to fill the need, just because I liked the project. But usually the challenge comes first. An example would be the Southern Pacific Class A-50-17 automobile car project I did awhile back. The three blog posts describing the work are at the following links:
http://modelingthesp.blogspot.com/2014/12/modeling-southern-pacific-class-50-17.html
http://modelingthesp.blogspot.com/2015/01/modeling-sp-class-50-17-modeling.html
http://modelingthesp.blogspot.com/2015/01/modeling-sp-class-50-17-conclusion.html
The car itself is shown in the photo below. The main job here was to change the original kit car body from having five side sheets to the left of the door opening, and eight to the right, to the correct SP arrangement of, respectively, four and six sheets. You can click to enlarge this view of the complete and weathered model. 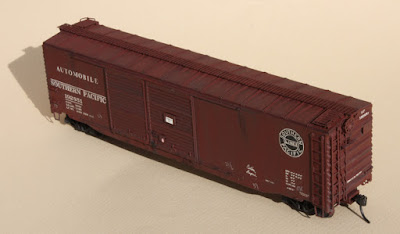 Another example might be the Mathieson tank project described earlier, a car I built specifically to see how well the Tichy dome would work in this application. The modeling is described at the following link, which was the concluding post on the project: http://modelingthesp.blogspot.com/2015/12/modeling-insulated-tank-car-part-2.html .
Of course, I would like to think that most of my freight car acquisitions represent operating needs (and many actually do), and I don’t mind some of the new cars representing a collecting instinct, such as wanting to have one car from each modern class of SP 12,500-gallon tank cars. As shown in several prior posts, I am almost there for that goal, though of course operations do not demand one car of each class, only a sufficient number of SP tank cars. And so it goes.
I continue to be very freight-car oriented in my modeling efforts, whether to identify cars to build, or to carry out various car modeling projects, or to operate the cars on my layout. But there are definitely times when it is helpful to remind myself of exactly why I want to add a particular car: is it fun, or an interesting challenge, or does it extend a collection, or do I need it to operate? The answer sometimes causes me to re-evaluate a purchase (or a disposal).
Tony Thompson
Posted by Tony Thompson at 12:14 PM