In recent months, I have posted a series of descriptions of route cards, on the basis of several groups of prototype cards provided by Ralph Heiss and John Holmes. These can be found via the most recent in the series, which is at this link: http://modelingthesp.blogspot.com/2016/08/route-cards-part-15-additional-examples.html . I find the prototype cards intriguing, and have been thinking about whether and how I could use them in my layout operating scheme.
One idea occurred to me immediately, partly as a response to a perceived problem in past operating sessions. Here is the problem. Cars which have an intermediate movement, such as confiscated empties or off-spot cars needing to get a final spot, don’t directly have instructions in the usual cycle of Waybill — Empty Car Slip. I have used agent messages in an effort to clarify to crews what is needed (see for example my previous discussion at: http://modelingthesp.blogspot.com/2015/06/operating-with-agent-messages.html ). But as I said, crews often seem to misunderstand (or incompletely understand) this kind of car movement.
A possible solution was suggested by one of the route cards, namely this one from the Heiss collection, a Union Pacific card. I showed it in one of the prior posts about prototype route cards (you can see that discussion at: http://modelingthesp.blogspot.com/2016/07/route-cards-part-14-still-more-examples.html ). 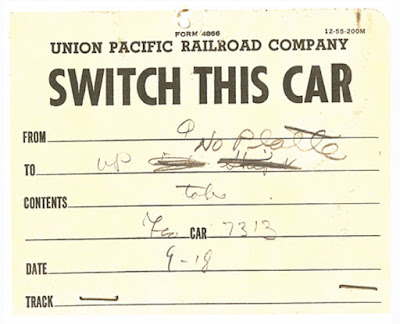 This could obviously be used as directions to a freight crew, for a non-waybill movement.
My procedure was simply to clean up this image with a clone stamp in Photoshop, including removal of the UP name, then discard color information in the image to convert the file to black-and-white. I then re-sized it to match my waybill size and shape, at 2.5 x 3.5 inches, and the resulting card image is shown below. 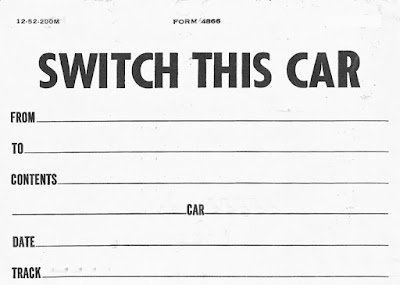 The next step is print it on tan paper to give a kind of manila card look. It can then be filled out by hand (as were nearly all prototype cards like this that I have seen). Here’s an example: 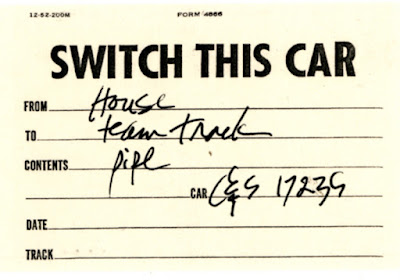 You can note here the somewhat manila color of the cards I printed. The directions are to move an off-spot car, GS gondola C&S 17235, from the house track to the team track.
My experiments so far with this card seem to work well. I will continue to explore its use in future operating sessions, and am also considering other uses for route cards in operation.
Tony Thompson
Posted by Tony Thompson at 10:15 AM