In a previous post, I explained in a simplified way how in-transit shipment privileges worked, and what prototype transit waybills would look like. (See: http://modelingthesp.blogspot.com/2016/05/waybills-part-50-in-transit.html .) The example I showed in some detail was that of milling wheat into flour, a case in which essentially all the wheat moves onward to destination in the form of flour. The same situation would obtain with any commodity that is merely stored in transit, rather than being processed or altered before moving onward.
But when in-transit processing changes the quantity of material to move onward, there are additional issues. This is an aspect of the story that I didn’t include previously, partly for the sake of brevity. In freight operations literature, the change in quantity is what was called “transit loss.” Imagine a box company which mills rough lumber to make box shook. (“Box shook” is a bundle of parts for assembling a wooden box, with the box to be assembled at its place of use.) In the process of milling the lumber, a certain amount is converted into sawdust and cut-offs, and that part of the original shipment will not be shipped onward. How is this accounted for? Essentially, the charge for that part of the original shipment is removed.
One example of this kind of adjustment is shown in a page from the Southern Pacific station agent’s “rule book,” called Forms 39.1, which were issued to all agents and regularly updated. The resulting volume was about two inches thick. I was able to borrow a copy of one of these books and examine several parts of it, and I show here a page from the in-transit section, showing this kind of adjustment for transit loss. (You can click on the image to enlarge it.) The shipment was of lumber from Ashland, Oregon, to Valley Box Company at Castella, California, then after milling, onward to a consignee at Redlands, California. 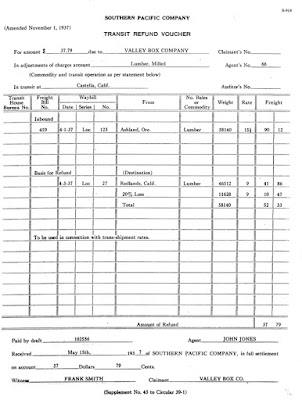 Note that this is not a waybill, but is a document enabling a refund of overpayment on shipping charges. It does illustrate the accounting viewpoint on transit charges. The 20 percent loss shown may have been a standard for this kind of milling, or it may have related only to this particular company.
The loss just described is different than a consistent and predictable loss, such as the loss in milling of wheat, set in tariffs as 1 percent, or from drying corn, of 10 percent. This means that if a shipment of 40,000 pounds of corn is received at a processing plant to be dried, that plant is only entitled to claim transit privileges on 90 percent of the inbound load, or 36,000 pounds. But losses such as cutting lumber into another form, as in the box shook example above, are not consistent from case to case and can be called out separately on a waybill reconciliation document.
Documentation was issued by regional Weighing and Inspection Bureaus for transit charges, based on reported weights. Here is an example, from the Station Agent’s Blue Book, as described in the prior post in this series (link at top of the present post). Note that the standard 1 percent loss  for wheat is indicated in the column in the upper portion, just right of center.

The Western Weighing and Inspection Bureau or WWIB did not cover, as might be imagined, the Far West of the United States, but the western portion of the Midwest. The bureau covering the Far West was called the Transcontinental Freight Bureau or TFB, which is the abbreviation I use on my SP waybills.
Individual railroads issued tariff documents setting out the allowed losses, of the kind just described, along with lists of commodities which could claim in-transit privileges, procedures to be followed, and accounting practices. Thus the modeler wishing to achieve an accurate description in waybills of a particular railroad’s practice would need to have access to an era-specific tariff publication from that railroad. Most of us will be comfortable with a more generic form, and I will turn to a model version of an in-transit waybill in the next post in this series.
Tony Thompson
Posted by Tony Thompson at 1:20 PM