I have written several posts about modeling railroad wheels, and will provide links below to prior posts. In the present post, I describe the wheel production process as it was practiced at Southern Pacific’s Sacramento General Shops (SGS) for many years. The basic description and most of the photos are from an article in the employee magazine, the Southern Pacific Bulletin (Pacific Lines), issue for July 1953. Here are those prior posts:

On the prototype, steel wheels do experience wear, and have to be replaced when their tread contour falls outside preset limits. In the 1930s, there was extensive use of wheels with thicker treads, which could be re-contoured on a wheel lathe when worn. If capable of this rework for return to service one time, they were called two-wear wheels (abbreviated “2-W” in end lettering on freight cars), or if more than two wear cycles could be accommodated, they were multiple-wear wheels (abbreviated M-W). But such wheels necessarily were heavier than single-wear (or “1-W”) wheels, and railroads gradually concluded that carrying the extra wheel weight for the life of the wheel was not worth the savings versus new wheels.
Instead, cast wheels were recycled, at least on railroads with the capability to do so. Scrap wheels were moved to a central shop, then broken up into small enough pieces for convenient remelting, usually in a cupola furnace. Here is a pile of scrap wheels at SP’s SGS in the 1950s: 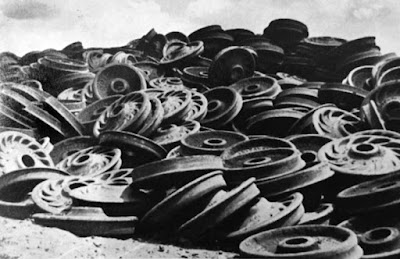 (All photos in this post are from Southern Pacific, published uncopyrighted and thus in the public domain.) Note that many wheels have ribbed backs, a strengthening feature of the wheel. These wheels of course have been pressed off their axles.
The cupola furnace at SGS could melt a charge of about 12,000 pounds of wheels (sometimes other high-carbon steel scrap would be included). To this charge would be added 50 to 60 pounds of limestone, a few pounds each of ferro-silicon and ferro-manganese to replenish alloying elements, and melted at about 2500• F. It was then heated above the melting temperature, to about 2750• F., and held for one and a half hours to homogenize the melt and allow impurities to migrate into the slag (floating on the iron) which formed from the limestone. The heat was then poured into smaller ladles for workmen to use in filling the wheel molds. Here is a photo of the cupola being bottom-tapped into a ladle. 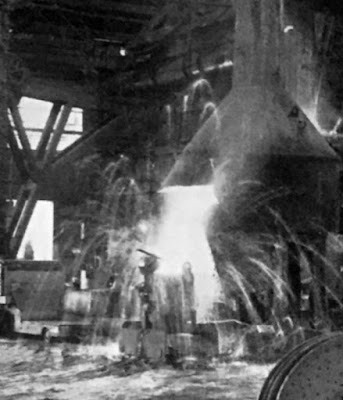 The ladles were then moved over the sand molds encased in frames, and the molds filled with molten iron. The molds also contained steel “chillers” against what would become the wheel tread and flange, to accelerate cooling and raise the hardness of those areas. The chilled treads were also made uniform in dimensions by casting against these steel formers. Here are two workers filling a mold. The ladle looks big enough to fill four or five molds. 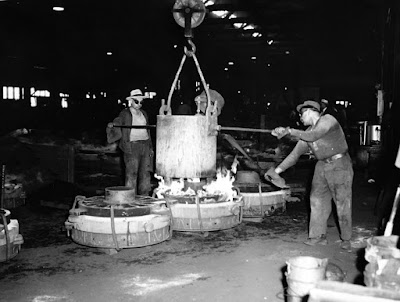 The entire foundry floor could accommodate a large number of wheel molds at a time. A full cupola charge of 12,000 pounds would produce about 15 wheels of 800 pounds each. Once the molds were filled, they were allowed to solidify and cool for 40 minutes, at which point they would be 1200 to 1400• F in temperature. Below is a view of the foundry from the crane catwalk. In this view, the crane is lifting a red-hot wheel from its mold. 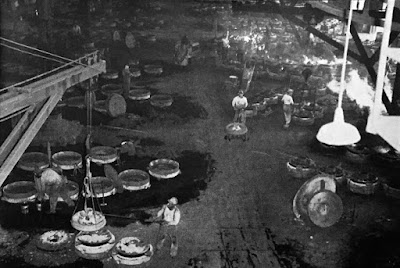 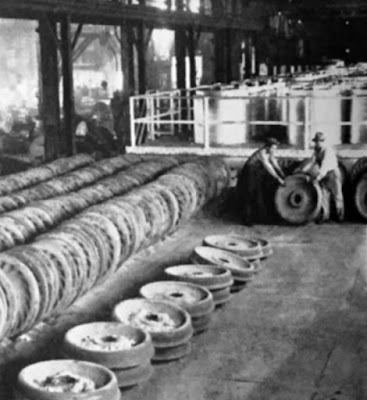 Once cleaned, the new wheels were inspected for any flaws, and also for dimensional correctness, using a circumference gauge. The photo at left shows Wheel Inspector Elmer Noe checking for circumference and flange dimensions. At right, Wheel Roller Felipe Casero has the skill to safely move these 800-pound wheels to where they are stored. 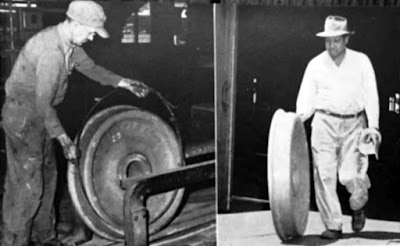 These new wheels could then be pressed onto axles and moved to regional shops for wheel replacement. Southern Pacific in the 1950s produced about 350 wheels a day in this foundry. If we assume 225 working days a year, and 350 wheels every working day, it’s an annual production of about 79,000 wheels, enough to equip 9800 freight cars. That’s about 20 percent of SP’s freight car fleet at the time, about 50,000 cars, implying that the average wheel lasted in service about five years.
I will return to some topics on freight car wheels and modeling in future posts. But I thought it might be interesting to see something about how one prototype managed this process.
Tony Thompson
Posted by Tony Thompson at 11:40 AM