I have recently received a number of most interesting examples of prototype route cards, the small cards attached to freight cars by car clerks as an aid to yard crews or local train crews in clearly identifying destinations of cars. As I showed earlier (a post at: http://modelingthesp.blogspot.com/2012/01/route-cards-7.html ), the board on which route cards were placed was recommended to be no less than 5-1/2 x 9 inches and made of wood, so that route cards could be tacked or stapled to the board. These could be located on the side sill of open-top cars, on the door of box cars, and elsewhere as convenient. To repeat a photo used in a prior post about route cards, here is a clerk using a hammer stapler to attach a route card to a placard board (Cotton Belt photo). There is also a route card board on this car door, just visible behind the clerk’s face. 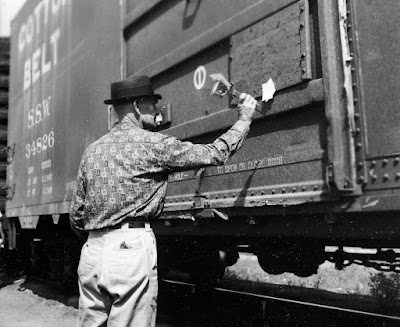 Just to illustrate in model form that route card boards could be located as railroads chose (as long as convenient for clerks), this SP GS gondola (an Ulrich model) has its route card board in the rightmost panel on the car side. This is known from photographs to be the prototype location on cars like this; to view an example of such a photo, see my previous post at: http://modelingthesp.blogspot.com/2011/11/route-cards-3.html . 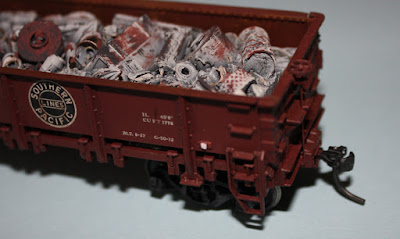 Ralph Heiss was kind enough to send me a selection from his collection of route cards. As might be expected, these are immensely variable. They were not standardized, and each railroad or shipper made up whatever suited them. Moreover, railroad codes for yard tracks, switching districts, industrial spurs or door spots, interchange tracks, or outgoing trains were entirely at each road’s discretion.
Here are a number of examples, all with code numbers which might be outbound tracks, particular switching areas, or train identities. The one at upper right carries the Cotton Belt emblem, but none of the others are specifically identified. The other three do look like Santa Fe formats, as illustrated in a previous post describing Keith Jordan’s use of similar documents. (You can read that post at: http://modelingthesp.blogspot.com/2013/12/route-cards-8.html .) All are roughly 3-1/2 inches square, a common size for such cards. The upper left card was attached to UP 196136; the lower left card to PFE 60469; and the lower right to PFE 63387. 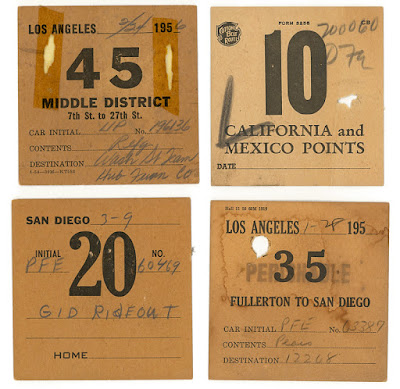 Note here, as on most route cards, that the car clerk has written with pencil the car reporting marks and number and sometimes other information (date, tonnage, contents, etc.)
Here is another group of these cards, also seeming to designate destination only by a code, though the one at far right is evidently for a particular train or class of train; on its “destination” line is stamped “Peoria-53.” The two at left are both Union Pacific tags, and the left card was attached to WAB 84162. The rightmost one was on M 25699.

The two UP cards are interesting in that the codes are in such bold type. Even in HO scale, it might be possible to reproduce lettering like this, or at least suggest it.
Finally, here are three additional interesting cards, The left one was attached to Southern 11990; the middle one is a Great Northern form and was on SAL 56524; and the right one, a UP form, to SL-SF 1313, obviously destined to Los Angeles. Use of other than black type is interesting, too.

To me, these are a fascinating insight into what car clerks did, and what switch crews had to work with. There are a bunch more of these which Ralph was kind enough to share. I will be showing examples of them in future posts.
Tony Thompson
Posted by Tony Thompson at 11:53 AM