In the first post in this series, I showed a Jack Delano photo of a car repair track at Proviso Yard in Chicago, emphasizing the neatly stacked truck sideframes and bolsters that are visible in that photo. I went on to comment about ways to realistically model such sideframes (the post can be seen at: http://modelingthesp.blogspot.com/2016/06/prototype-parts-storage-vs-junk.html ). There is in fact more to say on the topic of parts storage versus junk piles, and I will continue in this post.
I wrote a post recently about the modeling of railroad wheels and wheelsets (it’s at: http://modelingthesp.blogspot.com/2016/04/truck-and-wheelset-modeling.html ). Wheels also are naturally stacked neatly when stored, and to accompany my modeling of sideframe and bolster storage (shown in the post cited at the top of the present post), I decided to add some stacks of wheels as well. A typical steel wheel for a 50-ton car weighs about 750 pounds, so these are not something a worker walks around with, but they do get stacked up in the vicinity of shops that do wheel truing or wheel replacement. The machine shop attached to the roundhouse in my layout town of Shumala might well have done wheel replacement, so stacks of wheels would make sense.
Model wheels could come from a variety of sources, the best being the Tichy set no. 3004, which comprises a whole lot of wheels and axles which are readily combined into wheelsets, as I showed in the post cited in the previous paragraph. But older model wheels can serve too. Even though they are the once-standard Code 110 ( meaning 0.110 inches thick), the excessive thickness is not as apparent in a stack or other mass of wheels. I no longer operate any car trucks with plastic wheels, so have an ample supply of old wheels. They are easily pulled off of steel axles, which I also don’t want to operate. I glued up some stacks, and painted them dark brown, with some rusty overtones like in the prototype photo in the linked post at the top of the present post. Then I glued them to scale 2 x 8-inch planks. Here are two of them, along with a single wheel (the ribbed wheels are old Train Miniature wheels.) These will reside alongside my roundhouse at Shumala, near the machine shop. 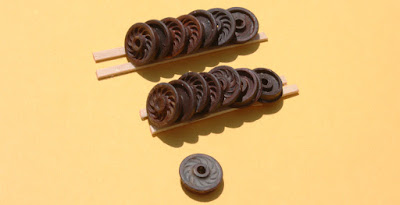 As I mentioned, all these wheels are the old-fashioned “Code 110” wheels, but you can see that in stacks like these it’s not as obvious.
Another part largely misunderstood by modelers is prototype couplers. They ordinarily have a rather short shank, as with the Gould coupler shown below. The shape of the butt end varies with manufacturer and type of draft yoke (the part in which the coupler rides and which is strongly connected to the center sill). 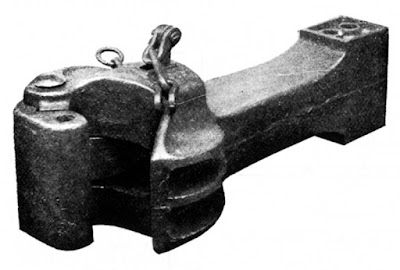 Another kind of coupler butt is shown by the ARA standard Type D coupler below, with a horizontal slot for the key attachment to the draft yoke. 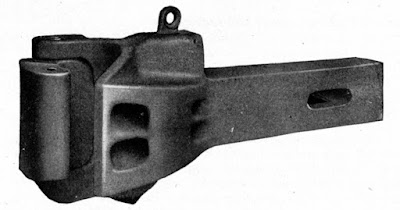 I hope it is evident that having your HO scale shop storage area on the layout contain couplers with the shanks of Kadee or Accurail couplers will not exactly represent what you see above.
Digging around in old stuff in some parts boxes and drawers, I found a few dummy couplers from back in the day. Some are plastic, some are cast metal. Varney made the best one, but others made good representations too. In fact, the Varney dummy is so good looking that I and other modelers used to put them on contest models for the most realistic appearance. But any of these dummies make fine scenery, with the butt cut to a length like what you see above. 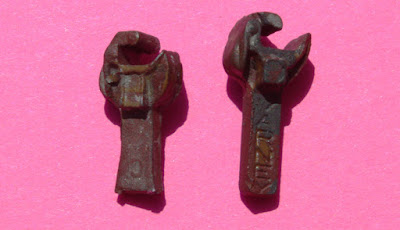 In the plastic coupler shank on the right, you can probably see the word “VARNEY” embossed. (You can click to enlarge.) I will have a group of five or six dummy couplers like this in my parts storage area near the roundhouse.
As mentioned in the first post in this series, I think having realistic parts stored is essential, whether wheels, sideframes, bolsters, couplers, or whatever. And they should be neatly stored, in my opinion, not heaped up in a jumble of mixed parts. The prototype usually stacked things neatly, and so should we.
Tony Thompson
Posted by Tony Thompson at 10:03 AM