One of several uncompleted projects on Richard Hendrickson’s workbench at the time of his passing was an intriguing detailing effort on a 65-foot mill gondola. In this post, I describe and illustrate that project, for what may be learned from it. But it is among the projects I intend to auction later this summer. I describe it here as an instructive approach for anyone who might wish to do some of the same things with a gondola model. (Anyone not sure who Richard was might find my memorial post of interest, and it is at this link: http://modelingthesp.blogspot.com/2014/07/in-memoriam-richard-hendrickson.html .)
The body is the recent 65-foot gondola model from Athearn. Richard was working to upgrade details in several areas, and was likely aiming at a model of one of the Santa Fe gondolas of this 65-foot type, which was from one of classes GA-47, -48, or -55, all built between 1937 and 1941 and all to the same design except for trucks. One thing needed to model these cars was to backdate them with original Dreadnaught ends in a reverse configuration, which Richard had already done. He modeled the drop end at one end of the car in the lowered position, doubtless because he was planning a load which would be longer than the car. Note the filled and sanded ejector pin marks in the sides and floor. 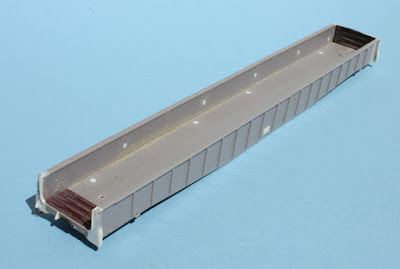 In the photo above, you see also the placard board that Santa Fe placed prominently at the center of the car side, in the form of a white styrene rectangle.
Also visible in the photo above is that Richard had rebuilt the corner posts on the car to more nearly match the Santa Fe prototype. At one corners, he had also added individual grab irons, sill step, and as the photo below shows, a retainer valve. The end in the dropped position is one of Richard’s own epoxy castings. 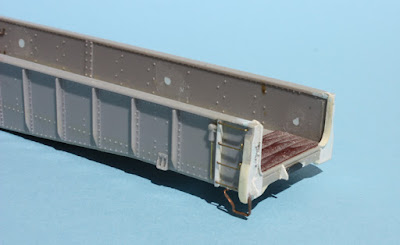 I should mention, incidentally, that all the prototype information for this model work is from Richard’s own book, Santa Fe Open-Top Cars: Flat, Gondola and Hopper Cars, 1902–1959, published by the Santa Fe Railway Historical and Modeling Society in 2009. Here is a photo from that book, showing the interior of one of these cars. Note the pivoting  loops on the car side, which can be raised up to hold a side stake to restrain some kinds of loads. These are called stake holders. 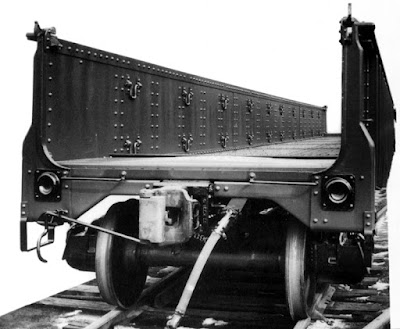 To me, perhaps the most impressive part of Richard’s work was his decision to add the stake holders on the car interior. This are rarely modeled, and when molded in place are usually rather flattened. Instead, Richard decided to add them as brass wire parts. He had only added about a quarter of the ones needed, but you can see a good sample of them in this photo.

These were attached with CA.
Obviously one challenge in fabricating these little brass wire parts is to make them uniform. Richard built a steel tool to do so. Here is a photo of the tool, along with a few of the fabricated parts he hadn’t attached yet, and a piece of the wire.

This is 0.014-inch wire. I don’t know if there was a mating part to this tool, or if pliers were used to form wire over the tool shape (I think the latter — I have experimented, and it works). What I have photographed is everything that was in a single box for this project, so if there was a mating tool part, it has been lost.
Each of the car projects Richard was working on are interesting. This is only one. Last year I showed my completion of another of his gondola models, that one for the Wheeling & Lake Erie (you can read the post at: http://modelingthesp.blogspot.com/2015/05/completing-richard-hendrickson-freight.html ). There is a third gondola project which will be among the ones to be auctioned, a C&O gondola, and there are several box car-type projects too. I will be announcing this auction presently to the Steam Era Freight Car and Resin Freight Cars email lists on Yahoo, and can be contacted directly for additional information.
Tony Thompson