I have written about a variety of Richard’s freight car models in earlier posts. I showed his open-car loads in two earlier posts, links to which are below. The first of these showed loads which required more than one car for their movement.

I also showed a selection of his lumber loads (which can be viewed at: http://modelingthesp.blogspot.com/2015/06/richard-hendricksons-lumber-loads.html . These are on flat cars and thus are also open-car loads.
By the way, anyone not sure who Richard was, or has perhaps forgotten, might find my memorial post of interest, and it can be seen at this link: http://modelingthesp.blogspot.com/2014/07/in-memoriam-richard-hendrickson.html .
In the present post, I want to show other aspects of his modeling. I will begin with what I regard as a wonderfully weathered model, a C&EI box car with billboard initials. But as you see here, such lettering might well be seriously dirty after a range of years in service. In this photo, C&EI 64198 has reweigh and repack stencils consistent with Richard’s modeling date of October 1947, but for use on my layout, I have since re-patched and re-decaled these data for my 1953 era.

Richard especially liked tank car models, and had built quite a number. I did keep a few of them. One of my own favorites was the Magnolia car, which he had weathered pretty heavily. The white paint scheme for which Magnolia was famous had been discontinued around the start of World War II, and of course almost all tank cars got dirty and were rarely repainted, so even by 1947, any surviving white Magnolia cars would be  seriously grimy. Here is Richard’s representation of that appearance, on MPCX 797.

My next example is from another one of Richard’s favorite subjects, the Santa Fe’s refrigerator car fleet. He depicted one of the SFRD cars from the days before icing machines, when Santa Fe followed the distinctive practice of arranging its ice hatches to open toward the car center, rather than toward the car end as nearly every other owner did. This is the “map side” of SFRD 35719. 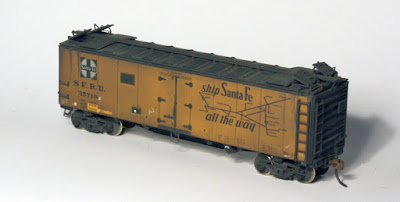 Because I model Southern Pacific and its Pacific Fruit Express refrigerator car subsidiary, I should not ever operate this SFRD car on my layout as being loaded  outbound from a packing house, but it can be loaded inbound, for example to my wholesale grocer.
I might not have chosen to mention this next model, as it was identified in the post cited at the top of the present post, about multi-car loads. But the photo there was an almost-overhead view. To show the car a little more clearly, here is a side view of SP 94033, Class G-50-13. In service, of course, a load like this would have to have an idler flat car under the near end, and that is how this car was portrayed in the post on multi-car loads.

Lastly, I  will show one of the cars Richard prepared to include in the weathering clinic he and I presented jointly several times. This is from the earliest Union Pacific covered hopper class, CH-70-1, which was indeed painted boxcar red, though UP joined most other railroads in painting subsequent classes medium gray. I like the way the cement streaking was handled.

This modest selection is only intended as a sampler. Quite a few more of Richard’s models were auctioned on line last month, and the photos of them remain available on Google Drive for anyone who wants to see them. Here are the links:

I am proud to have these and a few others of Richard’s cars now operating on my layout. They have certainly enhanced both the variety and the quality of my freight car operations.
Tony Thompson
Posted by Tony Thompson at 10:22 AM