Sound familiar? Many reading this will have just recently read Mont Switzer’s fine article in Model Railroader (the issue for August 2016, page 36). I’m going to talk about the exact same starting point, an Accurail wood-sheathed refrigerator car decorated for Burlington Refrigerator Express (BREX). But as you’ll see, my project is different from Mont’s. I will quickly add that this is no reflection at all on Mont’s article or his modeling. It’s just because my objectives are different in two ways.
First, my starting point is not a kit, but a partly completed project by Richard Hendrickson, which I wanted to finish. Thus some decisions about how to do this model had already been made by Richard, and I decided not to second-guess those. Second, Richard and I were aiming at something different from Mont, in that we wanted to backdate the car to a prior era (originally, for Richard’s modeling time of October 1947). Both points lead to differences between my car and Mont’s, but not a better or (I hope) worse model.
(Anyone not sure who Richard was might find my memorial post of interest, and it is at this link: http://modelingthesp.blogspot.com/2014/07/in-memoriam-richard-hendrickson.html .)
Let me start with a prototype photo, contributed by Bill Welch. It shows the pre-1951 paint scheme on cars like this, with black side hardware and, equally visibly, the words VENTILATOR - REFRIGERATOR to the right of the car door. In the later paint scheme that Mont modeled, this was replaced by the word REFRIGERATOR only. The space under the door is boxcar red. 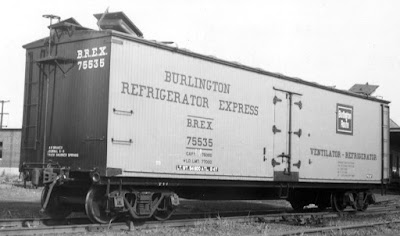 Visible in this image is that the truck centers are closer to the car end than is the case for the Accurail model. Mont corrected this on his model, but Richard had already built up and glued together the underframe, so that wasn’t at all readily fixable. I decided to let it go as it is.
Richard had also assembled simplified brake gear, as seen here. The brake cylinder is Tichy and the levers appear to be scale 1 x 6-inch styrene strip, while reservoir and valve are the Accurail kit parts. I will add brake rods, likely all that Richard planned to do, since the deep center sill would hide anything more. Note too that the molded-on sill steps are removed, so that metal ones can be added.

On the car body, Richard had completely stripped off the ends, much as Mont did, to permit the application of wire grab irons and free-standing ladders. But unlike Mont, Richard also stripped the ladders from the car side so they too could be re-applied as freestanding parts. Here is the left side of the car, showing the B end also, which has been stripped and sanded, but not repainted. Richard had already matched the paint on the car side where ladder and grabs had been removed, including the area of dimensional data at the right. 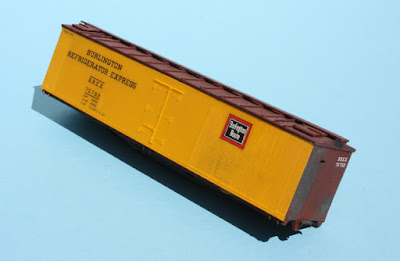 My own work began with the roof. Richard had removed the cast-on corner grab irons and repainted the area to match the factory roof color. I simply drilled the holes to attach my preferred corner grab iron parts, Detail Associates FC 6205. 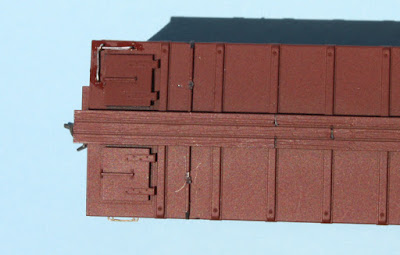 Note here that I scribed the running boards crosswise, to indicate separate planks. Also, Richard had notched the molded-on hatch support bar. In the Mont Switzer article cited at the top of this post, a separate brass strip part was used for this, but Richard evidently was going to be content with the molded part, as modified.
I will continue with this project in a future post. Because I haven’t had a wood-sheathed BREX reefer in my fleet, this one will be a nice addition.
Tony Thompson
Posted by Tony Thompson at 1:42 PM