The previous two posts in this series contain examples of the prototype route cards in the collection of Ralph Heiss. (You can read the most recent one at this link: http://modelingthesp.blogspot.com/2016/07/route-cards-part-12-more-examples.html .) Many are from the 1950s and 1960s. Most were retrieved from freight cars in service, often on route card boards which had a number of cards stapled to them. According to folks who have worked in yards, there was no reason and usually no time to remove old route cards when adding new ones; the new card would simply be stapled atop the accumulation, or alongside it.
Before I show more cards, I want to address a question I received via email. The questioner wondered whether flat cars had route card boards, and if so, where. As with many open-top cars, a common location was near the left bolster, as you see on this SP car (between the second and third stake pockets from the left). The photo was taken April 16, 1950 at Ithaca, New York (Arnold Menke collection). 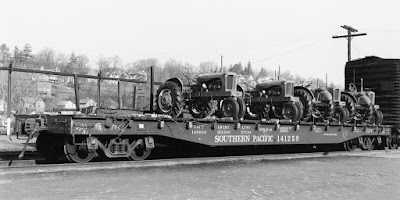 But as always, clerks did things as they liked, and with any car having wood parts, they might well staple that route card anywhere convenient. That's shown in this photo of a route card simply affixed to the end of the deck planking of the car (which is a Class F-70-2 car of the SP, in an SP photo). You can click on the photo to enlarge it.

Returning to prototype route cards themselves, one particular type of card directs a car to be switched to interchange with another railroad. I showed a number of such cards in an earlier post (which you can peruse at this link: http://modelingthesp.blogspot.com/2013/12/route-cards-8.html ), and the Ralph Heiss collection includes more of them, too. Here I show a few of them. The one on the left is a Peoria & Pekin Union card, and is directed to the Nickel Plate (the initials “NKP” are underneath the large numeral 8; you can click to enlarge). The middle card is especially interesting, as it is round instead of rectangular; it is an Alton & Southern card directing a car to the Cotton Belt interchange. The one on the right is probably a card to move cars to an SP interchange, though no additional information can be discerned on the card itself.

Another group of this card type is shown below. The one on the left is quite clearly an interchange card, moving a car from the Burlington to the Chicago Great Western. The one on the right is less clear, with the symbol “CRI” possibly referring to the Rock Island under its old mark of CRIP, but is probably some other symbol. It is for Great Northern car 43955 at Proviso Yard, and the destination is shown as Elmira, New York via the Erie. Thus CRI is likely an interchange symbol to the Erie. It is an unusual card in one other respect: it is dated and includes the year, Oct. 28, 1955.

A third group of these kinds of cards is shown next. The left-most card clearly is an assignment to a “Fast Freight” though the railroad or train symbol are not shown. The center one is a Union Pacific card directing a car, UP 188952, to the Southern Pacific. The card at right directs an empty SP car home to the SP, evidently at an interchange point or directly connected to one.

Lastly, two more interesting examples. The left-most is a Rock Island card directing car ATSF 17184 to a “Red Ball” train destined to Council Bluffs, Iowa, perhaps as symbol Q37A, or maybe that is a classification track. The round yard stamp is for Burr Oak Yard, Rock Island’s yard in Blue Island (Chicago area) which mostly made up westward trains. The card on the right, dated Feb. 11, 1956, is another Proviso Yard (Chicago) card, and the symbol “FRD” is likely a train symbol, though it could mean “forward.” The car identified is SP automobile car 64782. 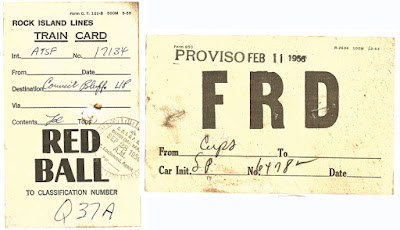 As in the previous posts in this series, the format and appearance of these route cards varies greatly from one example to the next. In O or G scale, it would be possible to try and reproduce some of these “looks,” but in HO only the fattest lettering would be discernible. I really have enjoyed examining and trying to learn from these cards, so once again, my warm thanks to Ralph Heiss for sharing them.
Tony Thompson
Posted by Tony Thompson at 9:41 AM