I have discussed this topic before, but want to add information in this post about a useful source of information for placarding. The question always is, what placard goes with what cargo?
The appearance and use of prototype placards, emphasizing my own modeling era of 1953, were discussed in a previous post just on that topic (at: http://modelingthesp.blogspot.com/2012/03/tank-car-placards-prototype.html ). I followed that post with a discussion of model tank car placards (see it at: http://modelingthesp.blogspot.com/2012/03/tank-car-placards-modeling.html ), and updated with more information in a following post (available at: http://modelingthesp.blogspot.com/2012/12/tank-car-placards-more-on-modeling.html ). Finally, I wrote a post to call attention to an excellent work of history for the chemical industry, which readily allows one to know what products were the primary output of which chemical companies (find it here: http://modelingthesp.blogspot.com/2015/10/tank-car-cargoes-reference.html ).
In a number of the foregoing posts, I mentioned one good source of information about which placards go with which cargoes, an appendix to Ed Kaminski’s book, Tank Cars: American Car & Foundry Company, 1865–1955 (Signature Press, 2003). But I realize not everyone wants to buy that book, and might like a less expensive source of comparable information. Here’s a suggestion.
For a number of years, a book has been published annually as a guidebook for emergency responders (firefighters in particular, but also police and hazmat people). There was a North American version, published by the appropriate agencies in Canada, the U.S. and Mexico, and today there is a very similar international one. All of them use United Nations nomenclature and contain the same information about hazardous substances. These are readily purchased on-line, at prices ranging from about $3 to $8, the lower price being a pocket-size but complete book. Here is a link to just one of many available sources: http://www.labelmaster.com/shop/erg/?gclid=Cj0KEQjw_qW9BRCcv-Xc5Jn-26gBEiQAM-iJhU_kQQAJMovXbU-1fDSnr57FQruDp2ZcRKKkwAElU-gaAvyf8P8HAQ .
I have an older one, and if you know any firefighters or other responders, they may well have outdated copies around that they could give you. Much of the information is also on-line if you don’t want to buy a small book. Anyway, here is my copy (the cover design varies from time to time): 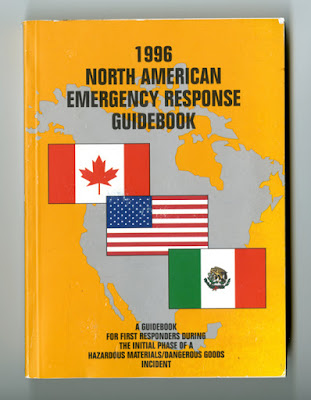 The value here is that each potential cargo is identified as to its primary danger. A cargo may, for example, be flammable and poisonous, and the latter is likely to be the primary danger, thus identifying the placard needed. Or a cargo may be flammable and also corrosive, and the most dangerous of those two characteristics will determine which danger is placarded.
For the post-1981 modeler, the placard style contains the four-digit United Nations identifying number, and a variety of color coding is used to quickly identify categories of risk. At the other extreme, pre-1960 modeling has to accommodate a smaller number of risk categories and placards, with not entirely consistent colors or names. (For more about the placards of both of those eras, as well as placards of the 1960–1981 period, see the first post cited at the top of the present post).
Just to offer a single model example, I will choose a Tangent three-compartment car. I posted an earlier summary on how multi-compartment tank cars were waybilled (see it at: http://modelingthesp.blogspot.com/2016/01/waybills-part-48-multi-compartment-tank.html ), and this model would be handled that way too. Since in this case all three compartments contain liquids whose primary danger is that they are flammable, which I looked up in the book shown above, the placard is of that type. 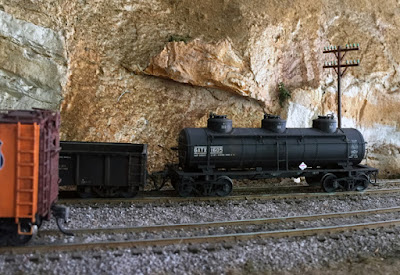 Though most guest operators on my layout do not take much notice of tank car placards, I like to make them accurate for my own satisfaction. With a range of model placards readily available (see for example this post: http://modelingthesp.blogspot.com/2012/12/tank-car-placards-more-on-modeling.html ), this is easy to do, requiring only the information about cargoes. That is the value of the book shown above: you can quickly and easily determine which placard should be on particular tank car models.
Tony Thompson
Posted by Tony Thompson at 10:30 AM