I have written several prior posts touching on railroad wheels. The principal one can be found at the following link: http://modelingthesp.blogspot.com/2016/04/truck-and-wheelset-modeling.html . It emphasized the point that prototype wheels do not have very thick treads, compared to most model wheels; the prototype is a bit over 5.5 inches thick, which in HO scale is only 0.063 inches. What we call “semi-scale” wheels in HO are 0.088 inches (called Code 88), and older “standard wheels” in HO scale are 0.110 inches (Code 110), or about double the prototype size.
I wrote a post recently about production of cast wheels at Southern Pacific’s Sacramento General Shops. (You can read the post at this link: http://modelingthesp.blogspot.com/2016/07/southern-pacific-wheel-production.html .) Once wheels had been cleaned and had their dimensions checked, they were pressed onto axles with large hydraulic presses, thus creating what is called a wheelset. Here is a drawing of a wheelset, from the Wikipedia entry (at: https://en.wikipedia.org/wiki/Train_wheel ) about railroad wheels. It makes the point about the prototype thickness and overall appearance very clearly. 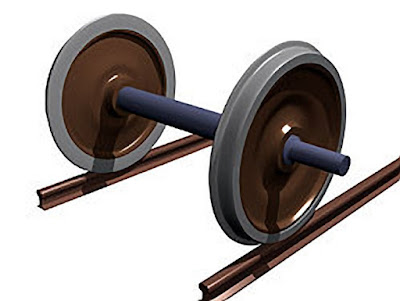 Note also here the prominent axle ends, on which the bearings rest; these are called journals. They are virtually identical for both solid and roller bearings.
When wheelsets were produced at central railroad shops (or purchased from manufacturers), they had to be transported to various outlying shops and yards where wheel replacement might take place. This photo from a 1953 Southern Pacific Bulletin (employee magazine) shows wheelsets being loaded onto a wheel car for this kind of transportation. A wheelset weighed about 2200 pounds at this time. The appearance of the wheels is quite clear, along with the journals. 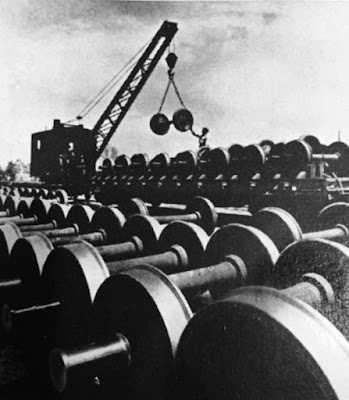 Many photos of wheels and trucks confirm the look of the drawing shown at the top of this post. Below is a Southern Pacific photo of a wheel change in progress. The car has been jacked up on its bolster and the truck rolled out for service. The proportions of wheel tread to the 33-inch diameter of the wheel are evident. 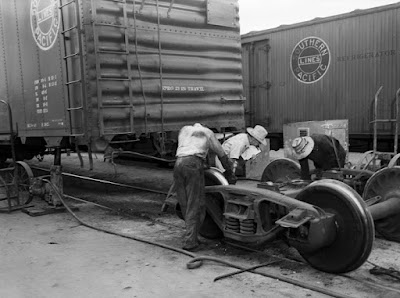 An even more dramatic photo is this view at the Pacific Fruit Express Los Angeles Shop (alongside SP’s Taylor Yard) of workmen assembling 70-to trucks for the R-70-12 mechanical refrigerator cars then in production. The journals have roller bearings already installed, but the wheelsets are dramatically portrayed. Note the hollow cast-steel bolster also. These are pedestal sideframes. 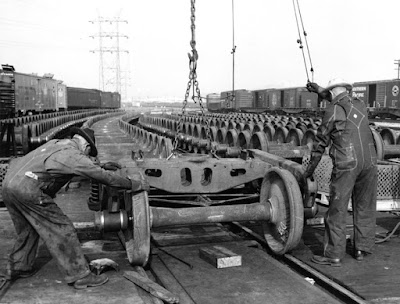 The overall message should be clear: prototype wheels are rather slender, compared to our model wheels, whether we use “standard” Code 110 or “semi-scale” Code 88, and in addition, the prototype wheelset has very prominent axle journals. These discrepancies don’t matter much under a freight car, but when a truck or wheelset is seen by itself, they become awfully obvious. At the top of this post is a link to my earlier post that showed one particular kind of model wheel, from Tichy set 3004, which can serve as an accurate prototypical wheel if one chooses to represent in model form, scenes like the ones shown in this post.
Tony Thompson
Posted by Tony Thompson at 11:46 AM