The well-known HO scale layout of David Parks, called Cumberland West, models the B&O and Western Maryland in Maryland and West Virginia. The layout website contains instructive details (see it at: http://dpcw.borail.net/ ), and there is also a separate website for the technical side of this very large (1200 square feet), complex and sophisticated layout (that site is at: https://sites.google.com/site/westerncumberland/home ). There is also a YouTube video tour which gives an excellent impression of the overall layout (here is a link: https://www.youtube.com/watch?v=iceAOV2QVfY ), though it is a video from 2012, and layout scenery continues to be completed. I had the privilege to be invited to an operating session recently, which is the subject of this post.
The layout has extensive trackage and operating complexity for both WM and B&O, and in principle both railroads can be run at the same time, but aisle space simply is in too short supply to make that practical. Operating sessions accordingly are for one railroad or the other. I had operated at David’s before, but coincidentally always for Western Maryland sessions. This time it was for the B&O portion, so I was intrigued to see how operations worked on that side.
My assignment was yardmaster at Keyser, West Virginia. The yard switch crews worked for me, so my main job was to understand upcoming scheduled and extra trains. Tower operator Sam Romerstein was a great help, as he knows the layout well and could interpret for me when I didn’t grasp the paperwork. Below is a shot early in the session (switcher engineer Andy Schnur is at right), during an unusual time when we were working a merchandise train in the yard. 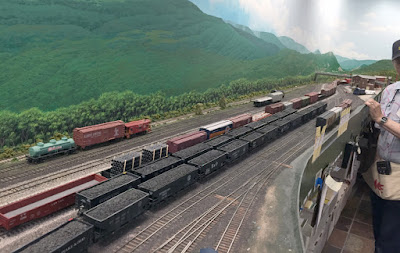 But the big job in the yard is handling coal traffic, both loads and empties. Here is a more typical view of what the yard tended to look like: 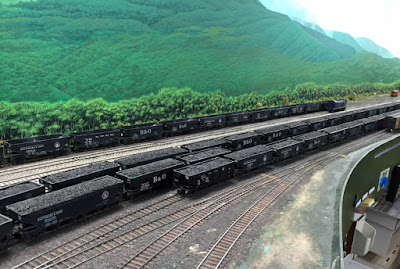 It did keep us busy. When there weren’t loaded coal trains to make up, each with its own mix of six grades of coal, we handled trains of empties in the other direction.
One of the best things about the layout is the visuals. The backdrops are superb, painted by noted railroad artist Mike Kotowski. Among the best scenes is this mine on the WM, shown below; if you’ve spent any time in West Virginia, there is no mistaking this topography. 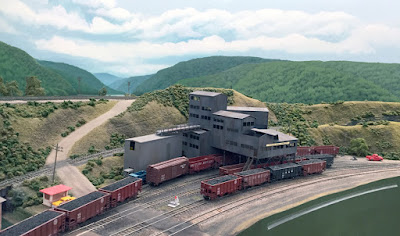 Another scenic treatment I really like is the West Virginia Pulp and Paper plant at Luke, Maryland, also on the WM. It neatly disguises an outside corner of the layout room, and definitely does have all the steam plumes of real paper plants. Luckily, it doesn’t have the smell! 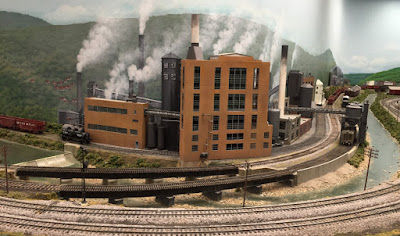 An especially nice feature of this scene is the foreground river. The location is below a low dam, and it has one of those “often seen, seldom modeled” looks (as Don Cassler liked to say) with the low river flow revealing lots of rock in the river bottom: 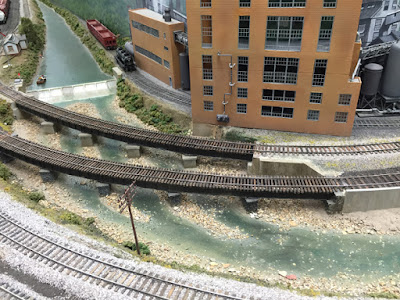 This is a great layout to railfan and and great one on which to operate. With both afternoon and evening sessions on the day, it made for a long pull, but I greatly enjoyed it. This is one layout that has always been a pleasure.
Tony Thompson
Posted by Tony Thompson at 3:14 PM