This title, “Trackwork wars,” may remind some readers of an ongoing series in this blog, called “Electrical wars.” (You can use that phrase as a search term in the search box to the right of this post, if you would like to see some of those posts.) The two topics are, of course, linked, in that layout electrical problems can result from trackwork issues, and vice versa. My initial post on the electrical side made that point (you can read that first post at this link: http://modelingthesp.blogspot.com/2012/09/electrical-wars.html ). In the present post, I will concentrate don the track part of the issue.
In the past, I have always laid track with care, sighting along the line of track frequently, almost obsessively, to make sure the rail path flows smoothly and that all rail joints have a smooth transition also. I have usually also been very careful about vertical curves, ensuring that all transitions between level and gradient track are smooth too. But recently I added some track in an area which is difficult to reach (the experienced layout builder reading this is already saying “uh oh”). Sure enough, that trackage turned out to have some problems.
The area of problems is where my old layout trackage in the town of Ballard had ended, and where I added a new track alignment to curve into the next town on the branch, Santa Rosalia. The photo below shows the area before the development of Jupiter Pump & Compressor, with the main line to Santa Rosalia at the bottom of the photo.

The main problem area is the track to the left of the bridge, bottom left in the photo above, which can be seen to have an inconsistent curve, and the curved switch on the bridge itself. I worked on the area for some time myself, and had made it a little better, but steam locomotives still tended to derail in this area at all but creeping speeds.
Here is a closer-up view. At lower right can be seen the irregular and too-sharp curvature of the track heading for the bridge. The Jupiter plant switcher is in the background. 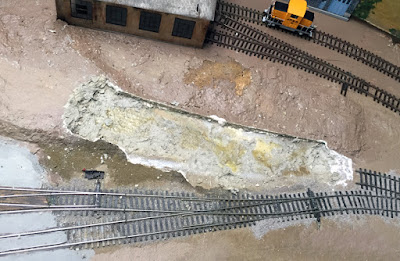 The obviously “in work” area at photo center is the area that will support the lead to Ballard’s Track 7, where the gradient needed to be adjusted from the previously built track base. (For a schematic map of Ballard, see this post: http://modelingthesp.blogspot.com/2015/07/extending-bromela-road.html .) I will say more about that project in a future post.
A couple of friends who had operated on the layout volunteered to consult on, and if necessary work on, this track problem. Jim Providenza and Paul Weiss arrived with a sobering quantity of tools and materials and set to work. Paul quickly pulled the ties from under the problem area at the right of the photo immediately above, including part of the turnout itself, and gently re-aligned it to let the rails curve naturally and smoothly. He then checked the track gauge and soldered each rail to a PC board tie. He also found that the trackwork in the whole area was not in a single plane, but needed some shims to be brought level. Here is how it looked when he finished. You can see how much smoother the curvature is, though it could be improved still more by hand-laying one or both of the adjacent switches to get a smoother curve. That may eventually be necessary.

Again, the area just above the trackwork will be the Track 7 lead.
Meanwhile, Jim was hard at work with a very valuable step: checking all rail gaps to make sure they were open, and placing styrene strip in them to prevent them closing. This filler also ensures a smooth running surface for equipment operating over this track. An example of the finished product is shown below, just at the Nipomo Street crossing in Ballard. 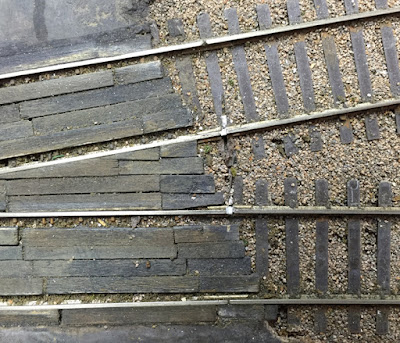 The styrene fillers here look like white spots on the rail, just to the right of the road crossing, and of course will be painted rail color.
Once the track corrected by Paul was checked again for gauge (it was right), I added ties under the rail and ballasted it. Shown below is a low-level view, akin to sighting along the rail, to show that it curves smoothly and has a slight easement. Ballast is freshly applied and needs a little cleaning up. 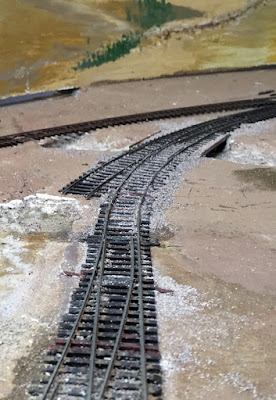 It is good to have this problem addressed, and I greatly appreciate the help of my friends in taking this on. I have an upcoming operating session and will regard the session as a working test for the corrected track segment.
Tony Thompson
Posted by Tony Thompson at 11:36 AM