Car flow for an operating session

When giving one of my occasional talks about waybills, or sometimes in response to blog posts about waybills, I get questions about how car flow is managed. By “car flow,” I don’t mean mere car movement, which of course is controlled by waybills or Empty Car Slips. I mean the overall patterns of car movement. As one questioner aptly put it, the issue is not how or why a car moves, but which car, and when.
One key part of my approach to answering this question is to describe my creation and use of a “distribution schedule,” giving the frequency of car deliveries to each industry or car spot. A previous post described my distribution schedule, how it was devised and how it is used (you can read that post at this link: http://modelingthesp.blogspot.com/2011/11/operations-demand-based-car-flow-2.html ). But use of this schedule is only part of how I set up an operating session, as I described a little briefly in an earlier post (see it at: http://modelingthesp.blogspot.com/2015/06/how-i-set-up-operating-session.html ).
There is always some carry-over from a prior session, cars spotted at industries which can now be picked up, whether freshly loaded or unloaded. Cars which departed in the last mainline local train from my branch are usually returned to storage, and new cars need to be selected as the new inbound cars. These can be cars called out by the distribution schedule, or may be cars that I simply want to cycle onto the layout after a time in storage. They do of course need to fit with the various industry destinations on the layout.
Because I have a number of packing houses, there are always a whole bunch of PFE reefers on the layout, both spotted at those houses and also at the ice deck or in arriving or departing trains. These too I like to cycle, so that all my entire PFE fleet gets operated and the same cars do not show up time after time. In addition, in all but the winter I would diversify the reefer fleet with a couple of cars of other owners, such as ART and FGEX, just as PFE did to cover its needs.
To show a single example, here is PFE 64739 being spotted at the ice deck in Shumala for what was known as “initial icing,” that is, the first icing after loading of the cargo. 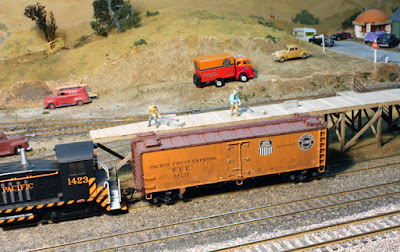 It isn’t car flow as such, but because I track seasonal produce harvests with the current calendar (I have described my approach to this in this post: http://modelingthesp.blogspot.com/2015/09/seasonality-of-crops-and-traffic.html ), I also cycle waybills to make sure crops are seasonally appropriate, and that suitable cars (in ventilator service, for example) are provided.
Because I have tracked the car flow of previous sessions, I can also compare my distribution schedule with overall patterns. If a bulk oil dealer, for example, has not received a box car of consumer packaged material such as motor oil and lubricants, it may be time to add such a car to the car flow. Another example is inbound box shook and printed box labels for the packing houses, as you seen in the view below of switching the lemon association at Santa Rosalia on my layout. 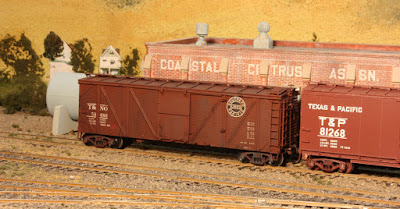 And last inbound and outbound cars need to be balanced at a number of my industries.
Finally, I do try to occasionally include something fairly exotic. This may be anything from a freight car from a very small railroad, to a vivid paint scheme like the Celanese tank car shown below, to a dramatic load on a flat car, such as a Euclid scraper or a couple of large diesel engines.

The tank car is not exotic in its cargo, just in its color. Practically all tank cars in my era were black, most with a modest amount of lettering, so even a perfectly legitimate chemical cargo becomes exotic in a bright paint scheme like this one. But most tank cars on my layout, like the prototype, are black.
I should emphasize that the foregoing examples of unusual or exotic car movements are very much the exception. Most inbound and outbound cars on the layout are fairly mundane paint schemes and predictable cargoes, which is how it should be. Although I feel free to introduce variations that appeal to me, my distribution schedule is the framework for all my car flow.
Tony Thompson
Posted by Tony Thompson at 11:26 AM