Tank cars are endlessly interesting, at least to me, and one distinctive type is the asphalt tank car. About 85 percent of the asphalt consumption in the U.S. goes into paving, in which about 5 percent asphalt is mixed with 95 percent stone aggregate to make what engineers call “asphalt concrete.” (You can read much more about this in a Wikipedia entry for asphalt.) Asphalt itself can be a natural product but nowadays most asphalt is a residue of petroleum refining, and is very viscous, even semi-solid, at room temperature. Thus tank cars used to transport it typically either have heater pipes, or are insulated to keep the product warm as long as possible.
In the Far West, asphalt is extensively produced from California crude oil, which contains an unusually high proportion of asphalt. Many oil deposits around the world are based on paraffin wax rather than asphalt, but of course asphalt is readily produced from asphaltic oils. Moreover, the asphalt produced in California (and the Gulf Coast) is not only consumed locally but may be transported far afield. My favorite illustration of this is the photo below, taken by J. Bowie at Chattanooga, Tennessee on July 28, 1948 (photo in the Wilber C. Whittaker collection, from whom I obtained a print). It shows a California Dispatch Line tank car, CDLX 1068, rather clearly lettered for Western Asphalt of Santa Maria, California.

Spilled asphalt is evident around, below and on the dome. You can click on the image to enlarge. Note, incidentally, that the reporting marks and number are much dirtier than the lessee’s name.
As it happens, CDLX had quite a few tank cars like this in asphalt service, though only a few of them were assigned to Western Asphalt. Here is a builder photo from AC&F of another asphalt tank car owned by CDLX. Being new and clean, minor lettering can be seen much better. 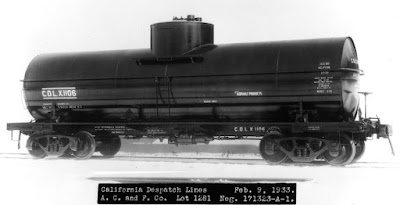 An avenue to model such cars is the AC&F Type 21 insulated tank car sold ready-to-run (RTR) by Walthers from time to time (originally a Proto2000 model). This is a good representation of an older Class ICC 104 tank car (for more on such cars, see my column in Model Railroad Hobbyist, MRH, in the issue for February 2016; you can download this or any issue for free at their website, www.mrhmag.com ). I said a little about these models and their availability from a non-Walthers seller in a post about wine tank cars, which can be found at this link: http://modelingthesp.blogspot.com/2014/08/wine-tank-cars.html .
I simply took one of the convention tank cars mentioned in the post just cited, which have silver upper bodies, and spray painted it entirely flat black, then added Testors Glosscote for decaling. The former Jerry Glow decals for a Western Asphalt car are now available from Tichy, their decal set no. 10013, which is for a 10,000-gallon car. Happily, the Walthers Type 21 is exactly that size. The Tichy decal set lacks the tank testing data seen at the far right edge of a tank body, and I added that from another decal set on hand. Here is the model with decals applied (needs heavy weathering, of course, which will follow). 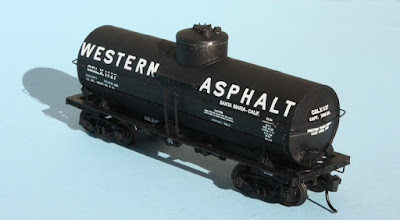 For anyone wishing to do the same with these convention cars, a special price, for a limited time only, is $10 for the car, $7 shipping within the U.S. Go to the 2011 convention store (still open at: http://www.x2011west.org/store.html ) to buy the cars, as long as supplies last.
This Western Asphalt car may remind some of an Overland brass model from some years back. The model included decals for Western Asphalt which were pretty good, except that Overland made the reporting marks as COLX, instead of CDLX. It’s easily fixed with a touch of white paint. I have such a car and will show it in a future post.
This car will join two other asphalt cars on my layout, since I model an area near Santa Maria, California. They can be unloaded at the California Division of Highways facility on my layout, or at team tracks, where I know asphalt was unloaded also. I find them an interesting addition, not just to my car fleet, but to my operating patterns as well.
Tony Thompson
Posted by Tony Thompson at 10:28 AM