I introduced this subject with a post describing the use of prototype cars and showing one example of a model asphalt car I recently completed (see it at: http://modelingthesp.blogspot.com/2016/09/asphalt-tank-cars.html ). A followup post showed additional photos of California Dispatch Line (CDLX) prototype cars and additional models of those cars (that post can be found at: http://modelingthesp.blogspot.com/2016/09/asphalt-tank-cars-part-2.html ). In the present post I show additional information about asphalt cars.
The previous posts might have given the impression that I am entirely focused on CDLX cars, and though I do have a number of such cars on my layout (including some representations of their considerable fleet of wine tank cars), my interests go beyond that. Another Western car owner which handled a lot of asphalt was the Richfield Oil Company, and photos exist of their cars. Here is one example, from the Bob’s Photo collection, an image taken at Los Angeles in February 1957:

Note the route cards stapled to the edge of the wood running board near both left and right trucks.
The ROX car shown above is a 10,000-gallon (nominal size) tank car, and is an older design, conforming to ARA Class IV (the predecessor of post-1927 ICC Class 104), and is an insulated car, ARA/AAR Type TMI. As such, it is closer to the Proto2000 (now Walthers) insulated tank car I am using for these asphalt cars. For more on that model and how to buy it cheaply, see either of the two prior posts on this topic. The car shown is an American Car & Foundry Type 25 car. Richfield owned a number of AC&F tank cars, which happens to be the builder represented by the Walthers tank car. Thanks to Ted Culotta for help with the tnk car photo.
For this model, I used an old Champ set, HT-243 for Richfield. It has much though not all of the data shown on the car above, but has lettering for 8000-gallon nominal capacity. I simply substituted from another decal set (Champ tank car data set HD-13) for the correct capacity of about 10,000 gallons. I also used another asphalt tank car set for the warning notice about application of steam to heater coils, located to the right of the ladder. The number I chose for the car, ROX 176, falls into Richfield’s 171–180 series, all 10,000-gallon cars of ARA Spec. III and equipped with heater coils. 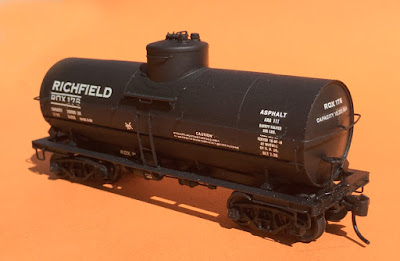 Though the model structure is not yet complete, I will include a Richfield bulk oil dealer in my layout town of Santa Rosalia, and of course this car can be delivered there.
I like the way the car has worked out, though of course it will look different when weathered. I look forward to achieving (hopefully) the streaks of spilled product you see in the prototype photo at the top of this post. I will show my weathering efforts on this Richfield car, and on earlier cars, in a future post.
Tony Thompson
Posted by Tony Thompson at 2:47 PM