The Great Basin Getaway or GBG is an alternate-year operating event in the Salt Lake City area, consisting of a number of fine layouts which are operated by visitors. This was the 27th year this event has been held (but mostly in alternate years), so it is a kind of “senior” event among operating weekends. Lee Nicholas has long been the mover and shaker of this event, and headed it up again this year. I had not previously attended, but was invited this year and found it an excellent function.
This year’s dates were September 8 to 10, and we were blessed with warm instead of searing hot weather, as can easily happen along the Wasatch front in September. I carpooled with three others, driving from the Bay Area to Salt Lake, and arriving a day early, we could go railfanning before the start of GBG. We chose to drive up to Soldier Summit, the old D&RGW main line, where there weren’t many trains running, but we did make a most interesting visit to the Utah Railway shop at Martin. Seeing a lineup of their big Morrison-Knudsen MK-50-3 units was impressive. 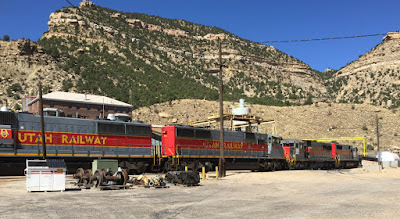 And just look at the surroundings! What a location. It was a fun day.
The first layout on which I operated was Gary Peterson’s Salt Lake Southern. A large and beautifully scenicked layout, it ran very smoothly. The first job I was assigned was the local to Lander, Wyoming, which had a whole bunch of industry spots and required careful planning to carry out all the car placements in limited space. A bonus to this job was the opportunity to watch mainline trains traverse the two-turn helix to the upper level, an “open” helix in which trains could be viewed during almost all of their time climbing up or down, a nice feature for engineers, who don’t have their train disappear for multiple minutes. You can see into the helix at the upper left of the photo below, with the train descending on the lower line as it leaves the helix; the upper line is near the top of the photo. In the foreground is Lander, where I was working. 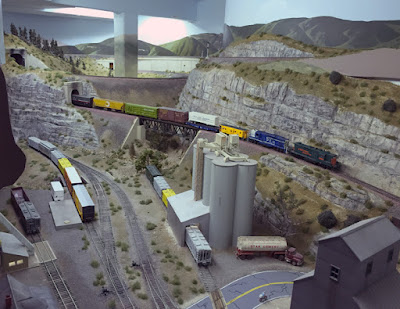 Of course I can’t do justice to this extensive layout with a single photo, and this one is just an example. It was fascinating to walk around and see all the working areas and, later in the day, to run a train over the whole main line.
My second layout was the Utah Colorado Western layout of Lee Nicholas, in Corinne, Utah. This is a nationally known and justly renowned layout, and I felt privileged to operate there. Like the Peterson layout, it is quite large and beautifully scenicked, but has quite a different flavor of its own. I really liked many of the skillfully designed industrial structures on the layout, for example Utah Steel, as shown here: 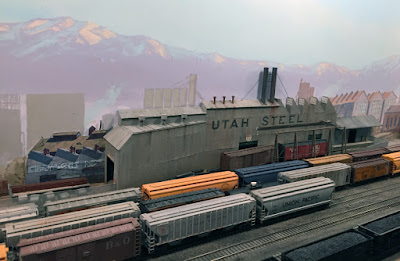 The backdrop here is typical of the layout, well conceived “hazy” features in the distance. Another example of beautifully rendered scenery is this corner scene. The coved corner is close to the center of the photo. 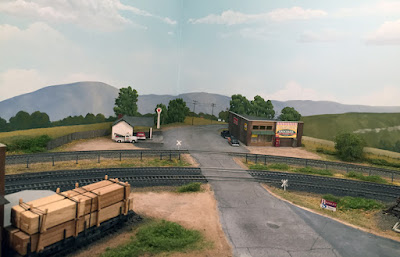 All in all, a terrific layout, certainly one of the best I’ve operated on.
I didn’t have the pleasure of operating on Rob Spangler’s Western Pacific, but was able to visit during an open-house evening. Rob has done a terrific job with his scenery, and I really enjoyed the chance to see this layout, which is well along but continuing to develop. In the photo below, I deliberately show the room corner and the lower deck, just to show how nicely the layout is presented. The scenery on the upper deck is absolutely first class. 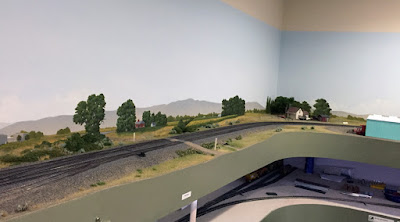 My third layout operating session was at Pat Bray’s Southern California switching layout. It includes SP, Santa Fe and UP, along with the Harbor Belt Line at San Pedro. There are four busy yards and lots of industries, so the various operating jobs involve transfer runs as well as local switching. It was a lot of fun. Shown below is Pat Bray at right, talking with one of the other operators, Bill Decker, at left. In the foreground are the orange groves at Pat’s town of Highgrove. 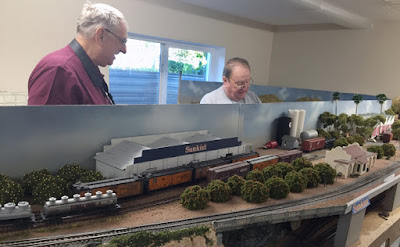 This was a superb weekend, one of the better operating visits I have made. My thanks go to the organizers, who presented a smoothly running weekend (including one heck of a banquet), and also to my carpool mates. With all of us confined to one automobile for all those hours, it’s most impressive we are not only still on speaking terms, but even remain friends!
Tony Thompson
Posted by Tony Thompson at 7:38 AM