Practically all model railroads include models of various industries. But what do I mean by “understanding” them? I just mean that you need to know more than the utter basics, both in how the industry itself is modeled, and in what cargoes go in, or out, or both, Of course, if it’s a model of a lumber yard, you would ship in lumber. If it’s a coal dealer, you ship in hoppers (or GS gondolas) of coal. If it’s a produce packing house, you ship out refrigerator car loads of perishables. But there is more to each of those industries, and there are others with considerably more complication.
Before saying more, I should emphasize that if you don’t use, or want to use, waybills containing much information, you may not need any understanding of industries. There’s a warehouse on your layout, say, and you route box cars to and from the warehouse. That may be all the story you need. But lots of industries have more complex situations, and these can be interesting and rewarding, both to research and to operate on the layout.
For one example, I have a printing company on my layout, called Caslon Printing, which is represented only by a building flat. What might be inbound and outbound here? What work is being accomplished by this box car? 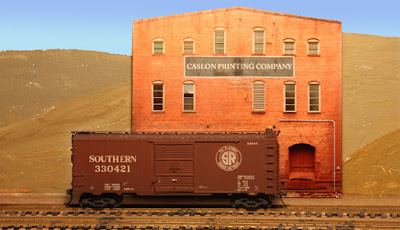 The model, by the way, is a modified C&BT Shops kit, with replaced and upgraded details, lettered with decals for Southern’s New Orleans & Northeastern subsidiary (NO&NE).
The most obvious inbound load is paper, which printers use in staggering quantities, and this wider-door car might well be carrying inbound paper. But printing plants serving regional rather than merely local customers will print and ship much of that paper out again. Glossy products like catalogs, brochures, advertising inserts for magazines or newspapers. and mailers of all kinds can represent pretty heavy loads. So this box car might equally easily be in the process of being loaded outbound. Other inbound loads can include ink, type, printing and binding machinery, solvents, and other necessities of printing. Some plants even ship out scrap paper.
Caslon Printing is just a building flat, but it can represent a wide variety of loads inbound and also outbound, Any industry like this can be researched — it is amazing how much industrial and company information can be found via Google — and I find it fun to learn about this kind of material.
Another example from my layout might be the fish cannery at Santa Rosalia. Naturally canned fish and fish products are loaded outbound, and things like empty cans are received inbound. But some kinds of fish are packed in oil, so that another inbound load can be vegetable oils. Here is a tank car from El Dorado Oil Works (edible oils, not petroleum products), being unloaded at the cannery. 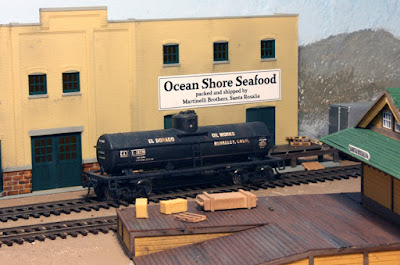 This model is an 8000-gallon InterMountain tank on a cut-down Athearn underframe, with custom decals. Again, knowing a little more about the work of this industry helps with freight car operation as well as contributing interest. Research can even tell you what the commercial fish species are in the region you model (see my post about this, which you can find at this link: http://modelingthesp.blogspot.com/2015/06/a-fishing-boat-for-my-santa-rosalia.html ). Then the outbound waybills can include regionally correct kinds of fish.
These are just two examples, but I have enjoyed learning about many of the industries I have modeled on my layout. And if nothing else, the cargoes on my model waybills represent realistic shipments, inbound and outbound, for each industry. I would encourage any modeler to try and learn more about industries he or she models.
Tony Thompson
Posted by Tony Thompson at 5:18 PM