A few days ago I posted an introduction to the topic of asphalt tank cars. That post can be found at this link: http://modelingthesp.blogspot.com/2016/09/asphalt-tank-cars.html . In the present post I want to say a little more, including showing some additional models.
In my modeling area, the California central coast near Santa Maria, the most obvious source of asphalt is the Western Asphalt company right in Santa Maria. They leased tank cars from California Dispatch Line (reporting mark CDLX) and they were rather boldly lettered, as shown in the previous post on these cars. Often the cars got really seriously dirty (and of course caked in spilled asphalt). The photo of CDLX 1068 in the previous post showed that, and here is an even dirtier example, CDLX 1089, a photo from the Richard Hendrickson collection.

This is an older Standard Tank Car Co. tank car with safety valves “fore and aft” rather than grouped together at one side of the dome, toward the B end, as was common. This is the right side of the car, and has no dome walkway on this side.
As mentioned in the previous post, California Dispatch had a large series of insulated tank cars of 10,000-gallon capacity, their series 1005–1199, nearly all of which were insulated and a number of which were lettered for asphalt service. Shown below is another one, freshly painted CDLX 1095 (Richard Hendrickson collection). Its steam piping is visible on the end of the car. 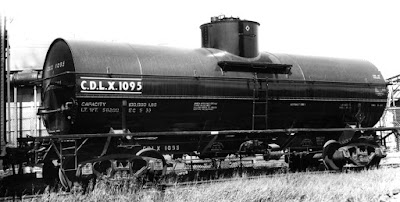 Note that on this clean car you can see the directions for application of steam to the heater pipes (between the reporting marks and the ladder), the “asphalt only” notation to the right of the ladder, and beyond that lettering, toward the right end of the car, is the notation, “leased to Shell Oil Co.”
All these lettering items are contained in the former Jerry Glow decal set, now available from Tichy as their set no. 10039. Unfortunately, Tichy chose to identify this as an 8000-gallon car, which it is not, but the lettering is readily substituted.
I used another one of the same Walthers (ex-Proto2000) tank cars that were shown in the previous post, to use this decal set, even though the model is a Type 21, the shorter and fatter tanks common before the mid-1920s. The photos above do show a longer and slimmer tank, though of the same 10,000-gallon capacity. Thus I did not use the same car number on my model. It’s shown below, with the Tichy decals except for the gallonage on the car end. 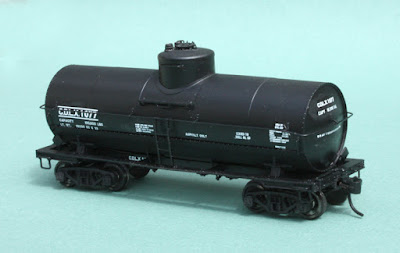 I should mention again that this car started life as the silver upper-body convention car model offered at the 2011 NMRA National Convention, and was simply repainted black. For anyone wishing to do the same with these convention cars, a special price, for a limited time only, is $10 for the car, $7 shipping within the U.S. Go to the 2011 convention store (still open at: http://www.x2011west.org/store.html ) to buy the cars, as long as supplies last.
As I mentioned in the previous post, my discussion of Western Asphalt cars may remind some of an Overland brass model from some years back (their OMI-3229). The model included decals for Western Asphalt, though one has to correct the Overland decals, which have the reporting marks as COLX, instead of CDLX. I fixed the error with a touch of white paint. Here is a photo of my model. Note that the reporting mark area is dirtier than the other lettering, in accord with the prototype photo shown in the previous post.

It is not very evident in this shot of the entire model that there is a representation of a lot of spilled asphalt. Shown below is a closer-up view to clarify that. (You can click to enlarge.) 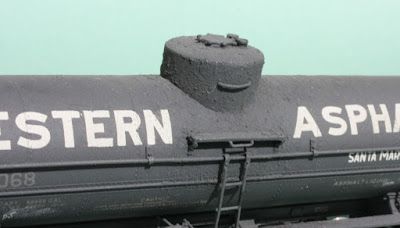 One obvious question is how these tank cars could be unloaded, or at what kind of facility. A few photos and a complete drawing of an older facility was included in the Model Railroader issue for October 1978, pages 100 and 101, by H.R. Lloyd Jr entitled “A bulk tar storage facility.” This was a city-owned facility in Ann Arbor for road tar, and had a boiler to provide steam to help with unloading into storage tanks. Unloading was by gravity from the tank car’s bottom outlet. I have also seen a fuzzy photo of a tank truck alongside an asphalt tank car, evidently at a team track.
I have enjoyed researching and lettering these asphalt tank car models, and have incorporated them into my layout operating scheme, both as deliveries to the California Division of Highways facility on my layout, and also as team track deliveries. In both cases, I assume they would be unloaded into tank trucks, either to go to road repair jobs or to an asphalt plant for mixing with aggregate. I have been told that some bulk oil dealers also handled asphalt, and that could be an additional destination for these cars.
Tony Thompson
Posted by Tony Thompson at 10:28 AM