In a previous post, I tried to explain what the in-transit privilege consists of, and the way it is billed on the prototype (you can see that post at this link: http://modelingthesp.blogspot.com/2016/05/waybills-part-50-in-transit.html ). I followed that post with an additional post to explain some of the complexities in commodity quantities in the paperwork for in-transit billing (at: http://modelingthesp.blogspot.com/2016/08/wayblls-part-51-more-on-prototype-in.html ). In the present post, I will show some ideas about how a corresponding model waybill might be prepared. Since extremely few modelers want even to pretend to do the record-keeping involved in complex in-transit situations like the wheat-to-flour or lumber shipments shown in the two previous posts, I will attempt to offer simplifications.
I will begin with the actual in-transit waybill form recommended by AAR (the Association of American Railroads) and used by virtually every railroad. This form is taken from page 120 of the book that is the authority on these matters, Railway Accounting Rules, published by the Accounting Division of AAR, the 1950 edition. (You can click to enlarge, but I show the relevant parts at larger size below.) Its form number is AD-134, the “AD” referring to the Accounting Division. 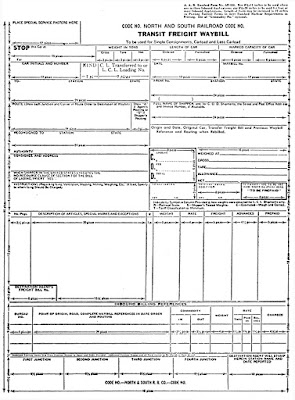 You may note that much of what is in this form is the dimensions, all in the typesetter’s unit of picas, so that forms prepared by all railroads would be the precise same dimensions.
There are two parts of this form that differ from the standard freight waybill (AAR Form AD-98), and those parts are the header and the section at the bottom, “Inbound Billing References.” First, the header, because that part is easy to add to our model waybills. It just shows the usual title block, including railroad name and code number.

If not familiar with code numbers, you may wish to read my post at: http://modelingthesp.blogspot.com/2012/08/railway-accounting-code-numbers.html . These were simply a compact and standard reference for each railroad, using numbers assigned by AAR.
Next is the lower part, the “Inbound Billing References.” I showed such a section filled out in the previous post (link at the top of the present post). Here is the prototype blank section.

As modelers, we can immediately see that some of these sections, such as Bureau No. (the left column), and the Rate and Charges columns (last four on the right), are things we probably don’t care about and will omit from a model form. Even those changes give something simpler:

I should note that this 1950 form segment is simplified from the older form shown in the previous post, a 1920s form, because the 1950 version puts point of origin, originating railroad, and date all into one column. My own version is somewhere in between.
I will now show an example of a model form which incorporates these two elements. Since any such transit waybill would be issued by a railroad, I have made my example for the Southern Pacific, which would be the source of most transit waybills used on my layout. 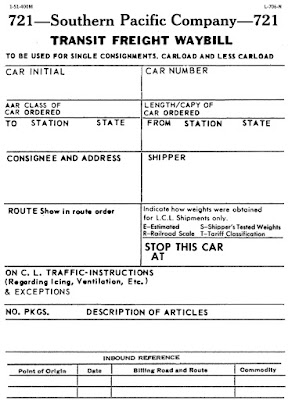 You can see that I made a simplified “inbound reference” section at the bottom, and used the Transit header at the top. Much of the rest is the same as my standard model waybill.
To show an example of how it might be filled out, Here I show an outbound boxcar load of paint thinner in consumer packaging (cans), and the starting point is acetone (used as paint thinner for some kinds of paint). It is the inbound acetone that results in the claim of in-transit processing benefit. The inbound reference part of this bill is pretty simplified and I may go further with it. 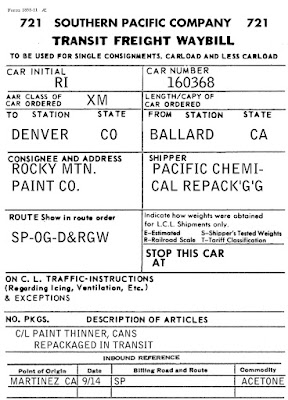 I have only made a couple of waybills like this, and will continue to experiment with how well they work, how well I like them, and how well crews in operating sessions can interpret them. Of course the material at the bottom of this waybill is only “typographical scenery,” as Al Kalmbach once referred to such things, but is part of the overall appearance of a bill like this.
Tony Thompson
Posted by Tony Thompson at 11:56 AM