In previous posts in this series, I have discussed a wide variety of topics for both prototype and model waybills; you can readily find any of those posts by using the search term "waybills” in the search box at right. (For a summary by Mike White of the first 25 or so posts, see this link: http://modelingthesp.blogspot.com/2013/02/waybills-27-collected-posts.html .) The present post takes up one thing usually neglected in these discussions, and that is the way these were handled in practice, on the prototype.
We tend to think first of the waybills traveling with the conductor of each train in which a particular car moved, and that is correct. I showed some time back a superb Philip Hastings photo of a conductor just re-boarding his caboose, having spoken with the agent and exchanged waybills with him. You can see that post at: http://modelingthesp.blogspot.com/2014/07/waybills-part-33-more-on-role-of-agent.html . Many caboose interior photos show the waybills or the conductor doing paperwork at his desk. Here is one example, a Southern Pacific photo. It shows conductor “Shorty” Wardle at his desk, with personal additions such as the desk lamp. The train is the Surf Turn out of Santa Barbara on the SP Coast Line, 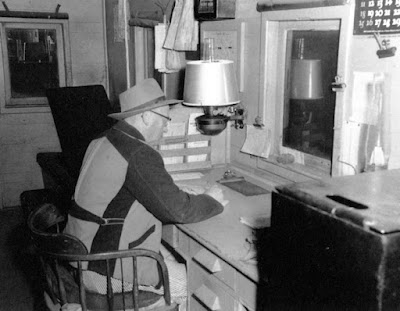 Note the wooden rack containing an employee timetable along with some folded waybills, at his left, and the several steel clips affixed to the wall, along with a calendar at upper right. The box visible on the right of the photo is the coal box for the stove (until the 1960s, SP caboose stoves burned coal).
Waybills in use were almost always folded the long way, since all the destination (consignee) information was on the left half of the document. Waybills being 8.5 x 11 inches in size, this made the folded document about 4.25 x 11 inches. Used waybills almost always show a crease down the middle, usually obvious, sometimes not. Here is an example of a 1950 Frisco waybill from Charles Hostetler’s blog, covered in stamps and handwritten notations, and with a white weigh ticket pasted to it. The crease is visible. (You can click on the image to enlarge it.) 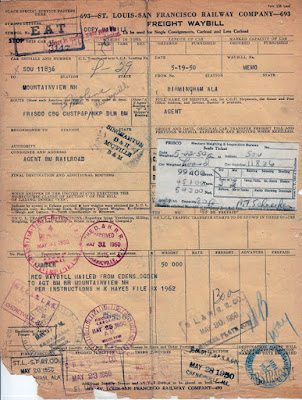 But even though the bills were handled en route by conductors, it should also be remembered that agents both originated and terminated waybill use in many cases. (In a city, freight clerks would have done the same.) And a waybill being exchanged between trains, or arriving at destination, would of course be handled by clerks too. I really liked the clerk photo that Jerry Dziedzic included in his column, “On Operation,” in Model Railroader, in the issue for June 2016, showing clerk Bob Nowland at Keddie, California, in the Western Pacific yard office there, with a batch of waybills in his hand. With permission from Jerry, who took the photo in February 1974, and from Model Railroader (which owns the image), here is that photo. 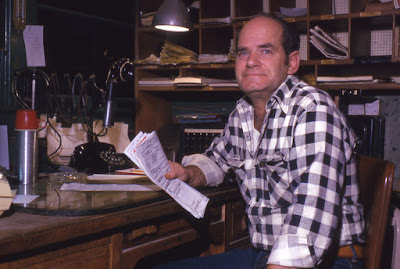 In this view you can see more paperwork, which may be additional waybills, in the pigeonholes on the wall, and a form on the desk in front of Bob, which Jerry speculated might be a switchlist based on those waybills.
For those of us who like to operate model railroads in at least an approximation of what the prototype did in the era modeled on a particular layout, these period photos are superb reminders of what we are trying to accomplish. I for one continue to find waybills, like the Frisco one shown above, to be fascinating documents that encapsulate a lot about freight car operation. They are also of course a marvelous window into a brief but very specific moment in the history of a particular freight car. But even beyond that, I also want to remember all the employees that worked with those waybills, and the ways in which they did that work.
Tony Thompson