High-pressure tank cars in the transition era were identified as ICC Class 105A. Unlike many tank cars of ICC 103 and ICC 104 design, they did not have bottom outlets for gravity unloading (that’s what the “A” suffix means),. Accordingly, they had to be unloaded through the valved connections in the valve housing on the top of the car. I have alluded briefly to this point in my article on prototype tank cars, which appeared in the February 2016 issue of Model Railroad Hobbyist or MRH (you can read on-line or download that or any issue of MRH at any time, for free, at their website, www.mrhmag.com .)
When modeling ICC 105A tank cars, we only need to know that the “dome” on the tank top is really a housing for piping connections and valves. When closed, such a housing or bonnet is small and simple in appearance. As an illustration, the photo below is an ICC 105A ammonia car owned by California Dispatch Line. It is a builder photo from American Car & Foundry, courtesy of Ed Kaminski. The bonnet is painted white. The same size and design of car could be used for LPG (Liquified Petroleum Gas). 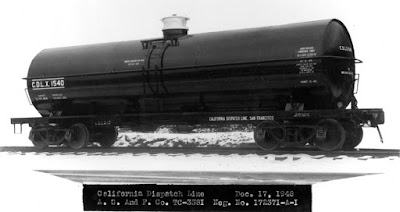 I have shown in several places the photo below of the interior of such a bonnet; this is also an AC&F photo from Ed Kaminski. This is the aspect that relates to loading and unloading. 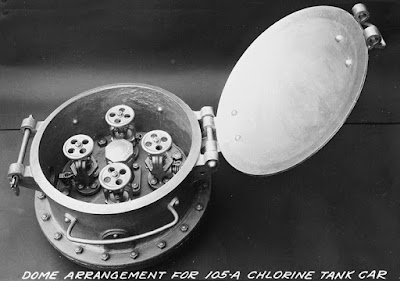 You can see the four pipe connections and valve handles. Each connection has a small disc covering its opening to the outside of the bonnet. One is visible just under the grab iron.
When in use for loading or unloading a high-pressure tank car, two of these connections were for movement of the liquid cargo, and one for cargo vapor (more on that in a moment). Well-known photographer John Vachon took a number of photos in 1942 at the Phillips refinery in Borger, Texas for the Office of War Information. Here is one of them, LC-USW3-010341-D, from the Library of Congress: 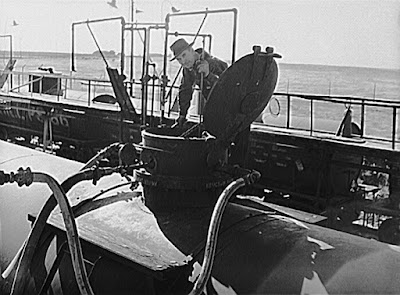 You can clearly see the three connected hoses here. The fourth outlet, if used, was often attached to a thermometer, but of course two outlets to the side were needed to permit unloading from either side.
Another 1942 Vachon view, LC-USW3-10331-D, shows below a connected bonnet from the sunny side. The two liquid lines emerge from the sides of the bonnet lying along the long axis of the car, while the vapor line is the third line. It includes a pressure gauge. 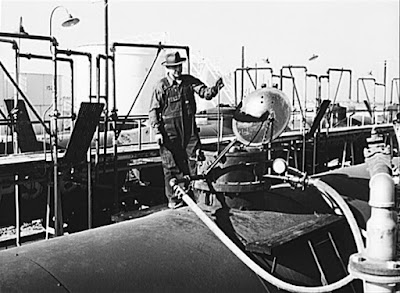 There are two reasons for a vapor line. One is that it prevents air from entering the cargo space, but the second and more important is that it is the means of pressurizing the car interior and forcing the liquid out through the liquid lines. Liquified gasses that are thermally saturated, like LPG, are difficult to pump as liquids because of a strong tendency to cavitate, so moving them by vapor pressure is simple and safe.
This process is illustrated below in a drawing by Richard Green. It was first presented in the CNWHS (Chicago & North Western Historical Society) Modeler, Volume 10, issue no. 1, and was contained in an article by Ron Christensen, about LPG cars and dealerships. The PDF article can be accessed at: http://www.cnwhs.org/modeling.htm . You can see that the liquid removal pipe extends to the bottom of the car. (You may wish to click on the image below to enlarge it.) 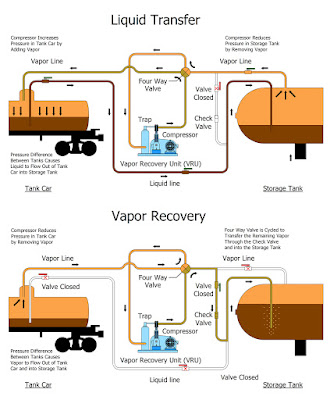 Note that after liquid movement, vapor can be recovered and the car interior brought to the desired final pressure.
Shown below is a drawing of the hose connections (also included in the Modeler article), showing clearly the arrangements. 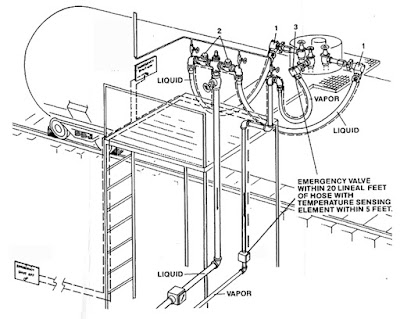 To summarize what this means for modelers who wish to represent unloading of high-pressure tank cars, a set of three hoses needs to be modeled. Moreover, it was common to color-code the piping for the liquid and vapor lines so that there would be no confusion. Though a variety of color codes can be seen in photos, the most common color for the liquid lines was red. This is shown in a Lloyd Keyser photo, taken at Green Bay, Wisconsin, of an LPG dealer facility. The counter-weighted drop-down walkway is a nice detail. Note that the two red liquid lines join right below the platform. 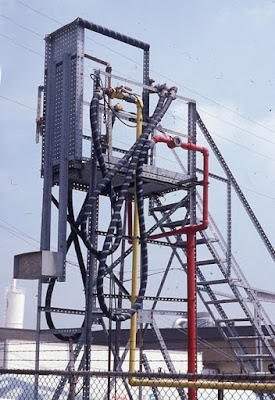 With this background on how these tank cars were loaded and unloaded, a modeler can proceed with appropriate elements in the scene being modeled.
Tony Thompson
Posted by Tony Thompson at 9:51 AM