In Part 1 (see: http://modelingthesp.blogspot.com/2015/03/tank-car-loading-unloading-platforms.html ), I described the needs I have for platforms to both load and unload tank cars at industries on my layout. My starting point is a Walthers kit, their no. 933-3104, which they call an “Oil Loading Platform.” Here is approximately what they envision it looking like (I say “approximately” because this is a photograph of the pre-production model, and there are numerous though minor differences between the model shown in this photo, and the parts provided in the kit). 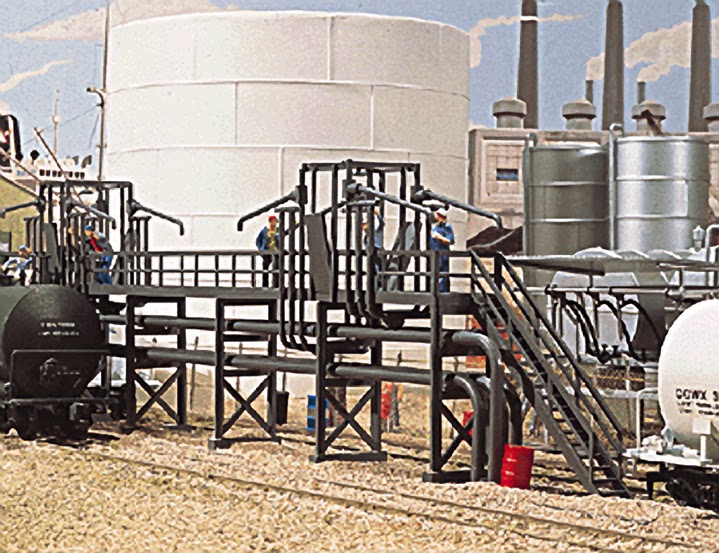 As I stated in Part 1, I am building two separate platforms with these parts, each of which has a loading/unloading position on one side, instead of the kit’s arrangement to load cars on both sides of the platform.
Here is a prototype view of a tank car loading being conducted from an elevated platform, a view I included in my Model Railroad Hobbyist article on building a model of a bulk oil dealer (March 2014 issue; all MRH issues can be downloaded free from their site, at: www.mrhmag.com ). The photo was taken by John Vachon in November 1942, at the Phillips refinery in Borger, Texas; the image is from the Library of Congress, image no. LC-USW3-011638. 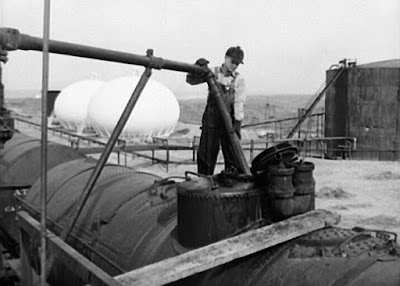 The workman obviously has used the plank to cross over to the tank car top, but more modern platforms almost always provided a short bridge or walkway to step over the gap.
If the pipe the workmen is holding in the photo above were arranged to pump out the car, this would also be what unloading could look like. Tank cars without bottom outlets (AAR Class TA) would necessarily be unloaded that way.
As I showed in Part 1, I scratchbuilt an additional platform support for my second platform, since the kit only provides three supports. I also used a piece of Evergreen styrene strip, 0.125 x 0.188 inches cross section, to make the concrete base for the fourth support. The first assembly step is to place the pipe runs so they connect the platform supports. This in turn required me to plan how I want my piping to be arranged for each platform. At the winery, piping can come out of the building wall to the platform; at the chemical plant, piping can come out of the ground. Luckily the kit provides ample pipe caps and unions so that piping can be configured in various ways. I did arrange the piping of my two platforms to suit each of my industries.
With all supports attached to bases, and piping runs adjusted to my needs, the two platforms were assembled, following the kit directions, though I will have to say that, compared to other Walthers kits, the fit of the parts was not particularly good. I had already painted the scribed-styrene platform deck a seasoned wood color (Star Brand STR-11), so in the view below you can see the contrast in color. This is one of the platforms in progress. 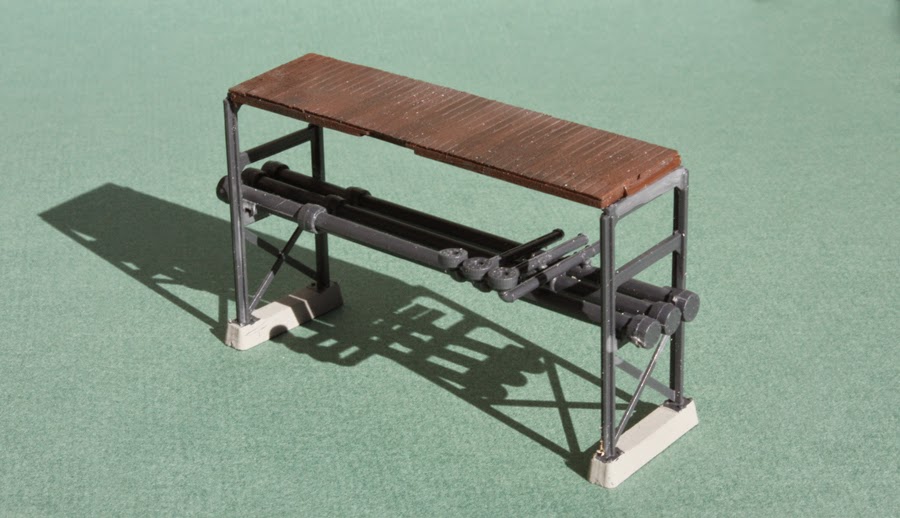 The bases of the upright supports have been painted Floquil “Concrete.”
The next step in completing these two separate platforms is the addition of railings. Here again, because the kit is designed as a single platform, its one-piece side railings have to be separated into two sets of side railings. And since the kit has only a one pair of end railings, one of my separated platforms will have to have new end railings.
The most important point to recognize about separating the railings is that there aren’t enough vertical posts. This means planning for the new end railings so that the parts separate correctly. I used the “walkway” part of the front railing from kit part no. 5 on one platform, and its plain part on the other one. Shown below is a photo at this point. The platform at right, with the longer piping, is the one for the winery.

The photo of the platform at left above shows the “missing post,” which will be concealed by the kit end pieces. And of course, when installing the railings, don’t forget the drop-down walkway, which has to be inserted as the front railing is attached. That is in place in the platform on the right.
After attaching the two parts of the divided kit part no. 5, shown above, I did the corresponding cut on part no. 4 and added the two sections to the two platforms, as you see below.

In this photo, you can see the ‘missing” posts on the platform at right, while the winery platform at left has end posts on both railing segments.
The next steps will be to add the missing pieces to complete the railings on the winery platform, and also add an access ladder to its back side. The kit stairway will be added to the other platform. Then comes piping. But those steps will be described in a future post.
Tony Thompson
Posted by Tony Thompson at 10:09 AM