In Part 1 of this series of blog posts, I introduced my project of building two tank car loading or unloading platforms, using as a starting point the Walthers kit for an “Oil Loading Platform,” their kit no. 3104. You can read that post at this link: http://modelingthesp.blogspot.com/2015/03/tank-car-loading-unloading-platforms.html .I simply divided the Walthers single platform into two platforms. In Part 2, I showed my assembled platforms before railings or piping had been added, other than the delivery piping to the platforms themselves, and I showed how I rearranged the kit railings to apply to my two platforms (see: http://modelingthesp.blogspot.com/2017/02/tank-car-loading-platforms-part-2.html ).
At the end of Part 2, I had one platform, the one to be used at my layout’s winery, lacking end railings, since those parts from the kit were to be applied to the second platform. Adding those end railings was pretty simple. I just added small support blocks of scale 4 x 4-inch styrene to the end posts, then attached crosspieces of scale 2 x 4-inch styrene strip. They can be seen in the photo below (they will of course be painted later). The access ladder hasn’t been added yet. 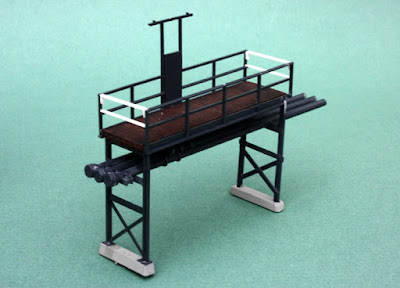 Meanwhile, the chemical company platform received the kit end railings. As was true in several steps in assembling this kit, the fit of parts was less reliable than in other Walthers kits I’ve assembled. I had to shim the posts at one end. Here you can see the shims in the white styrene. 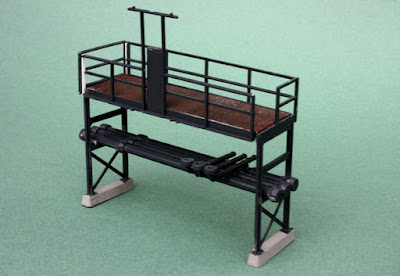 To add an access ladder to the winery platform, I first placed an additional post, using the scale 4 x 4-inch Slater’s styrene strip. Once glued and allowed to set very solid, this stabilizes the top and intermediate railings. The photo below shows the back side of the platform, relative to the track. 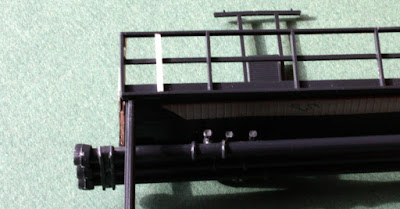 Once this intermediate post was well set, I used a sprue nipper to cut the top and intermediate railings, and add a length of brass ladder stock. 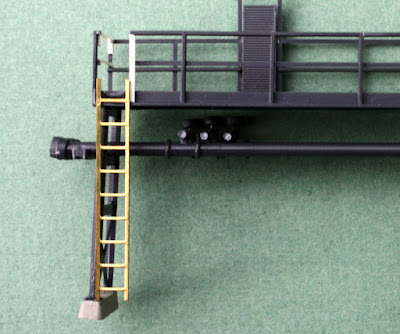 My next step was to add the loading pipes to the winery platform. It is common to color-code such piping, either the entire pipe or some part of each pipe. I have seen this kind of color coding done just at the valves, so chose to paint this piping that way. I used yellow and orange, plus green (Model Master “Zinc Chromate Green”). The delivery pipe was attached to the manifold outlet as though it had been swung parallel to the track.
Finally, I needed to paint all the white styrene and the ladder to match the rest of the platform. I have found Tamiya “German Grey,” no. XF-63, to be an excellent match for the color of the plastic in which this kit is molded. Below is shown the completed platform in place at the winery. 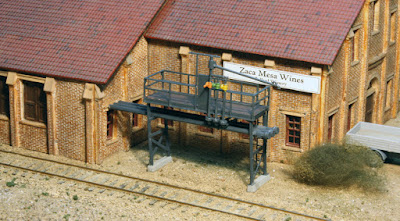 It was satisfying to get this platform finished, and it will make the “tank car spot” at the winery on my layout much more realistic. But the other platform, the chemical company one,  has some additional complications. The winery platform is for loading cars (as the Walthers kit was intended to portray), but the chemical one is to be used for unloading cars, which leads to several differences. I will show its completion in one or perhaps two posts about that platform.
Tony Thompson
Posted by Tony Thompson at 9:23 AM