In a previous post, I showed the prototype for a model which Richard Hendrickson had begun, and which I inherited. It is intended to be a Class FE-25 double-door auto car, rebuilt from an earlier car class (for prototype photos and an introduction to the model as I received it, see that first post at: http://modelingthesp.blogspot.com/2017/01/another-hendrickson-car-project.html ). In the present post, I show more of the model as it came to me, and proceed with the project.
Richard started the model with an Athearn 50-foot automobile car, because the sides have the pattern of side panels used by Santa Fe in this rebuild. The Athearn roof is wrong, having one too many panels, so it was removed and a substitute roof prepared. The Athearn ends are completely wrong for the Santa Fe car, so Richard removed them also and placed styrene bulkheads to fill the open ends. Below is a view inside the model, showing one of those bulkheads.

On the outside, Richard kitbashed corrugated ends to match the Santa Fe 1-7-5-5 pattern, I think from Tichy corrugated ends, though I am not sure. (Ends like this are described by counting the corrugations in each panel of the end, from the top down, thus 1-7-5-5.) Any such end has to receive also a widening strip along each side, to match the width of the rebuilt body. You can see this on the view below of the B end of the car. Richard had already placed grab irons, ladder, and brake gear. 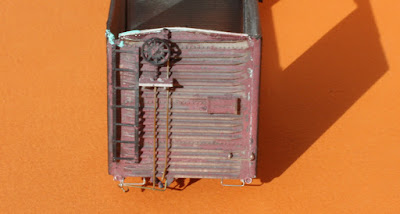 One glaring absence from the model at this point is the side doors. In fact, I suspect the reason Richard had not attached the roof was so that it would be easier to attach the doors properly before the roof was added. The door opening is a little over 14 feet on this car, so a pair of 7-foot doors is needed. I had some Branchline 7-foot Youngstown doors (their part no. 140006), now sold by Atlas as part BL 140006. This part number gets you two doors, so you have to have two sets for this double-door car. But there is a problem with these doors. They represent a post-war design with center operating levers. The prototype photos of the Santa Fe rebuild clearly show inner-corner operating levers. My solution was to carve off the center levers, as you see in this comparison of a stock door and a modified one. Note also that the door at right has been shortened to fit Richard’s model. 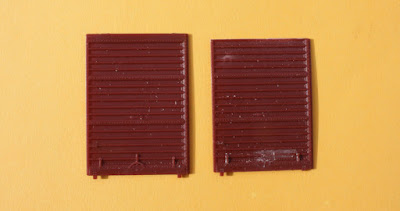 The good news is that these 7-foot-wide  doors do indeed fit the car, when shortened as just mentioned. The photo below shows a test fitting. The corner operating levers are not yet added.

The operating levers can readily be approximated by adding styrene strip or flat brass wire, which is my next step.
The style of these Youngstown doors is not an exact match to those shown on the prototype FE-25 cars in the previous post. The original Athearn auto car doors are a closer style, and Richard modified those doors on another model he built of an FE-25, though the Athearn doors are a little too wide. In fact, the lack of an exactly matching door may be what caused Richard to put this project on hold.
The other problem that might have stopped him on this model is that the door track is not below the car side, as it should be. This would not be an easy correction to make. He did it correctly from the beginning on his other FE-25 model, and might have decided not to complete work on the model I have. But I intend to continue with this project as best I can, because I like the prototype and I like the model components. As experienced modelers know, it can happen on many projects that eventually one has to make a compromise on some part of the build.
I will proceed with attaching doors and roof in a future post, and will probably also then complete side detailing. That will leave several areas of detailing, including brake gear, still to do before painting. But I look forward to completing this project that Richard started.
Tony Thompson
Posted by Tony Thompson at 10:55 AM