Among the modeling items I inherited from Richard Hendrickson were several in-progress car projects. One of these was a W&LE gondola, which I described completing in an earlier post (you can find that post at: http://modelingthesp.blogspot.com/2015/05/completing-richard-hendrickson-freight.html ). Another project I showed, though I have not completed it, was a 65-foot mill gondola. I presented the project as it currently stands, including a special tool, in a post last July (it is at this link: http://modelingthesp.blogspot.com/2016/07/an-interesting-hendrickson-gondola.html ). The present post describes a third such project, a rebuilt automobile car, which required some sleuthing.
(For anyone not sure who Richard Hendrickson was, or why I have so much respect for him and his modeling, you might wish to read my tribute to him, published as: http://modelingthesp.blogspot.com/2014/07/in-memoriam-richard-hendrickson.html .)
The reason for the sleuthing was that the model had reached a state of having the body almost completed, mostly needing detail parts, but I could not figure out what prototype was being modeled. But at Cocoa Beach last week (see my post about the meeting: http://modelingthesp.blogspot.com/2017/01/cocoa-beach-2017.html ), John Barry provided a probable prototype, the Santa Fe rebuilt automobile cars, and upon returning home, I turned to my copy of Richard’s book,  Furniture and Automobile Cars, Volume 3 of the series, Santa Fe Railway Rolling Stock Reference Series, published by the Santa Fe Railway Historical & Modeling Society, 1997. I quickly discovered that John was right. The model Richard was building was going to be a car of Santa Fe Class FE-25.
This class began life as the Santa Fe FE-Q cars, 500 cars built by Pullman in 1924. Shown below are FE-Q builder photos, which clearly depict the sectional sides, fishbelly underframe, and 7-5-5 corrugated ends of these cars. The plate steel doors only cover a ten-foot opening. It is not easy to see in the side view, but the trucks are the Andrews U-section cast-steel design. (You can click to enlarge.) 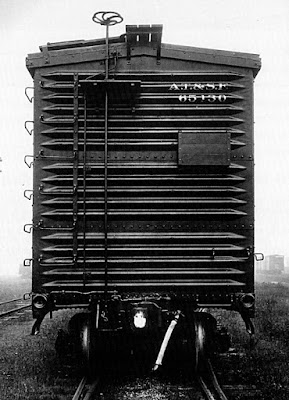 These Pullman photos are from the California State Railroad Museum (CSRM).
In wartime 1943, Santa Fe was able to obtain some steel for rebuilding cars, and rebuilt the entirety of the surviving cars of FE-Q into more modern automobile cars. They got new steel roofs of the straight-panel design; new sides with an interesting side-sheet pattern, completely replacing any trace of the original sectional sides; new doors; and the original ends were extended in height, but kept the original underframe. The result was the FE-25 cars. Shown below is a detail from a Virl Davis photo of one of these cars, clearly depicting the added top rib on the 7-5-5 original ends. You can also see the Ajax hand brake added in the rebuild. The shadows show that the brake step and running board are wood planks. 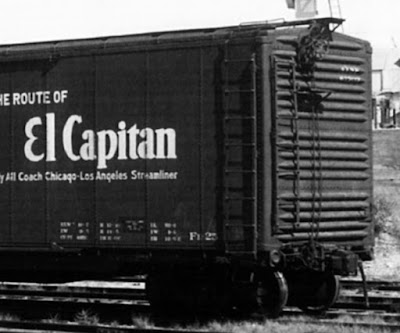 Late in the 1930s, some buyers of 50-foot automobile cars changed from the first design of 50-foot double-door cars, which had four side sheets to the left of the door opening and six to the right (called 4-6), with additional panels (and interior supporting posts), in a 4-7 arrangement, with unequal panel widths to the right of the door. In 1942, this became the AAR Recommended Practice, and though not all railroads followed it, clearly the Santa Fe did. The FE-25 rebuilds had the 4-7 pattern. This is shown below in a Santa Fe photo from CSRM. 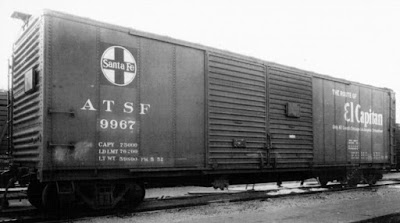 Richard’s model of this Santa Fe class began with an Athearn automobile car. He kept the floor and sides, which are the correct 4-7 pattern, with three narrower panels to the right of the door opening (see photo above). He acquired but had not added a replacement straight-panel roof (since the Athearn roof has one too many panels). Ends of course had to be replaced, and the wider car body also meant that the surviving underframe had a side sill narrower than the new body, a common situation in rebuilds of older cars.
I won’t show all those model features in this post, but will present a side view to illustrate the 4-7 panel pattern. Note also the AB brake valve located near the side sill (indicated by the arrow), as can be seen above in the photo of ATSF 9967. The fishbelly underframe, derived from an Athearn gondola, is also visible.

I am now at work with the effort needed to complete this model project as a Santa Fe FE-25. I will show additional work as it progresses, in future posts.
Tony Thompson
Posted by Tony Thompson at 11:33 AM