The previous post in this series introduced the topic of Pennsylvania Railroad gondolas in the transition era, both as a fraction of the total PRR car fleet, and in the form of comparison of quantities of cars in the major PRR classes in 1939 and 1955.  That post can be found at the following link: https://modelingthesp.blogspot.com/2020/11/pennsy-freight-cars-part-3-gondolas.html .

That post, however, only addressed the G22 class in any specific detail. In the present post, I want to consider the other important classes in the early 1950s. The graph of car classes in the previous post (see link above) showed the importance of class G22 in the 1950s, along with classes G27 and G31. I will address those classes below, but first I want to introduce class G26.

Class G26, built in 1930, was the first class of 65-foot mill gondolas on the PRR. All had drop ends and steel floors. Though the 1700 cars built are a small class by PRR standards, no other railroad had this quantity of 65-foot cars. A photo from the 1940 Car Builders’ Cyclopedia is shown below. It clearly depicts the four heavier side stakes, two at the bolsters and two at the major crossbearers, the points where the slanting part of the fishbelly sides joins the horizontal side in the car center.

Years ago, E&B Valley created an HO scale kit for this car, which was then sold for some years by Eastern Car Works (often available on eBay). It is a pretty decent model of the car, except that it sits extremely high on the trucks. This can be corrected, as I have done with my own model, following the kit review by Andy Sperandeo (Model Railroader, August 1981, page 44). It’s shown in my layout town of Shumala, with the Southern Pacific Coast Division main line in the foreground. The load is kitbashed from a pair of Atlas bridge girders.

But this is not one of the two large classes after 1950. Let me turn to G27. This class was built during 1936–1939, 4500 cars all told (by the year I model, 1953, fully 4495 cars were still in service!). As with class G26, this was more than any other railroad’s group of 52 ft. 6 in. gondolas. And similarly to G26, the side posts were heavier at the bolsters and major crossbeareers. The most distinctive aspect of this design, never duplicated by PRR or anyone else, was that the sides tapered inwards below the floor level. The photo below is a PRR image, from the Jack Consoli collection, courtesy Martin Lofton; you can see the inward taper below the floor.

For modeling, there was an excellent Sunshine kit, no. 48.6. My model from this kit is shown below, being tilted so you can see the side taper. The model has Kadee 2D-F8 trucks, and remains to be weathered, after which the reweigh and repack data would be added. Once the model is well weathered and has a coat of flat finish, the taper is much harder to see, thus this view.

Finally, I want to consider the large G31 class (and sub-classes). Here there were 12,150 cars built during 1949–1951, all of them 52 ft., 6 in. long inside. Most cars had welded sides, wood floors, and drop ends. But there were variations. Sub-classes G31C and G31E had riveted sides (apparently because not enough welded manufacturing capability was available), and sub-classes G31D and G31E had fixed ends. Below is a photo of G31B, from American Car & Foundry (courtesy Ed Kaminski). Note that now all side posts are almost the same. 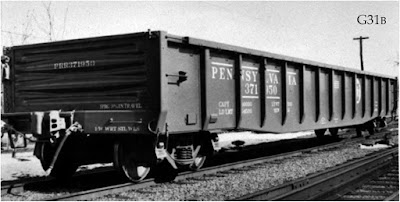 For modeling there has long been a Con-Cor (formerly Revell) model which is riveted and thus could model the two riveted sub-classes, but has many inaccuracies (which are correctable; see the Bill Darnaby article, Model Railroader, December 1993, page 96). I did go through that non-trivial set of corrections myself to make one of these cars, but today, we have a superb Tangent model, which reproduces G31B. My Tangent car, with added weathering, is shown below.

The Pennsylvania owned a lot of  gondola cars because so much steel of all kinds was produced and shipped in PRR territory. This fleet was extremely visible throughout North American, and deserves representation in every transition-era modeler’s fleet.
Tony Thompson