I have been completing the construction of my stash of resin kits, and the latest on the firing line is a Funaro & Camerlengo (F&C) kit for a Union Railroad gondola. This kit models a low-side mill gondola, just 50 feet long inside, that belonged to one of the U.S. Steel railroads, the Union. It’s kit 8141, and has a one-piece body, making it an easy build. (There was once a flat kit also, and the kit directions describe the construction of both, though not always clearly — make sure you use all the parts.)

The Union Railroad operates even today in the Pittsburgh, Pennsylvania area, and when I lived in Pittsburgh, I railfanned and photographed the Union a number of times. Serving what was then a vast complex of U.S. Steel facilities along and near the Monongahela River, it was an endlessly interesting prototype, so I was delighted when F&C offered this kit. Below is a prototype photo from the F&C directions.

It’s just possible to see in this builder photo that the “builder label’ reads “Pressed Steel Car Co.” The built date on the car is June 1936. Other builders of Union gondolas like this included Ralston, and Greenville Steel Car Company.

The one-piece body is very nice, with folding stake holders modeled on the inside walls and very nice sides and ends. The white resin body isn’t easy to photograph well, but shown below is an overall view of the body before adding any parts. Even the profiles of the Dreadnaught ends are correctly modeled on both sides.

The first step is the addition of bolsters and end sills to the one-piece body. The heavy, extended end sills fit perfectly on the body, impressive design and manufacturing. I pre-drilled a pilot hole in each bolster. Then the sills and bolsters were installed with CA, followed by the AB brake parts. I chose not to include piping on this model, as it would be hidden by the center sill.

With the bolsters in place, I drilled them for 2-56 screws, and tapped them using a bottoming tap or “gun tap.” Styrene sill steps are provided in the kit, but I substituted A-Line metal steps, Style A, to match the prototype photos. I installed them with canopy cement. The photo below shows the underbody at this stage. I have not yet fitted the coupler boxes. 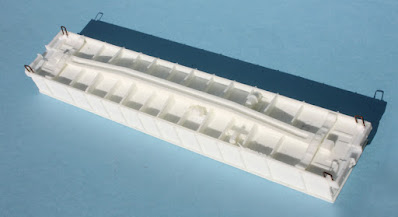 Then the floor casting is filed to fit inside, and installed.This is a very nice bit of resin casting, beautifully rich in rivets but a thin sheet. I attached it with canopy glue. On the underbody, I now installed several A-Line lead weights, so that the completed model will have some weight. These weights were cut in half with a large side-cutter so they will fit between center sill and sides.

Next I installed all the grab irons, noting that the side grab irons, 24 scale inches wide, are different from the end grab irons. With that done, I installed the handbrake gear box and chain on the B end, but used a Kadee Ajax brake wheel instead of the kit casting. Last, I installed corner caps and the retainer.

With the car supported on “interim truck support blocks,” I spray painted the entire model black. (The “support blocks” were described in an earlier post, at: http://modelingthesp.blogspot.com/2014/11/interim-truck-support-blocks.html .) Though the cars were not delivered in this color, by 1950 they had all been repainted black.

My next step of course was lettering. I used the kit decals, after applying a coat of Microscale Liquid Decal Film (F&C decals often need help). The Union had two groups of essentially identical cars, 1000 originally in each group, 6000–6999 and 9000–9999. There were slightly more of the 6000 series in service in my modeling year of 1953, so I chose a car number in that series.

Another issue is trucks. Modelers routinely use 50-ton trucks under 70-ton cars like this one (I’ve done it myself. . .), but in fact the 70-ton wheelbase usually differs, sideframes may be heavier, and spring groups are different. Looking at the photos in the F&C kit directions, the closest sideframe appearance I could find in a 70-ton truck is the Tahoe Model Works ASF truck (Tahoe no. 210), though this is actually a postwar design. At least it looks about like the Union Railroad prototype.

This photo shows the car with lettering completed but awaiting weathering. Couplers are removed until weathering takes place.

I chose to write about this kit because it is simple. I know there are some readers who are reluctant to take on any resin kit, but the modern resin kits with one-piece bodies are really not much more challenge than a styrene kit that has upgraded details. And you have access to an immensely greater variety of freight car models than if you depend entirely on styrene.