As many readers already know, Denny Anspach, MD, passed away on September 20 at the age of 86. I knew Denny for 30 years, though not really a close friend, and learned long ago to appreciate his  many fine qualities.

He was a skilled and energetic modeler in HO scale, but is far better known as the “father” (in some senses) of CSRM, the California State Railroad Museum. That is part of my connection to Denny; I  served for almost 20 years under his chairmanship of the museum’s Collections Committee, and I got to see close up how historically knowledgeable he was, and how dedicated to railroad history and preservation.

I wrote a short obituary for Denny at the request of Richard Bale, columnist for the on-line magazine Model Railroad Hobbyist, and what I wrote has now been published in the November 2020 issue. The piece is contained in the issue’s section on “news and events,” by Richard Bale and Jeff Schultz. That section is included in the free edition of MRH, available to read on-line or download, at their website, www.mrhmag.com , and is also included in the “Running Extra” edition for those of you who subscribe to it.

A distinguishing characteristic of Denny was his considerable interest in “classic” HO scale freight car kits. He was very knowledgeable about the history of early manufacturers, and had collected many of the kits. In fact, he greatly enjoyed finding an old kit, perhaps not skillfully assembled or well maintained, and then disassembling it, repairing any flaws, and reassembling it, often with upgraded details, so it was better than new.

Below is a photo from a couple of years ago, provided by CSRM, showing Denny with the kind of rolling stock he worked so hard to preserve. This is the same image used in MRH, except they cropped it very tightly to his head only. 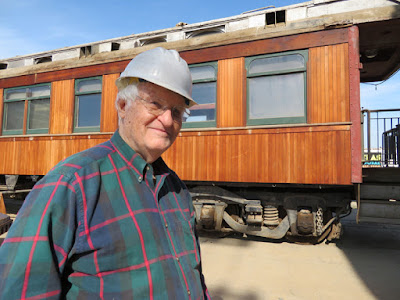 In my MRH piece, I tried to summarize his CSRM connections briefly, and included a modeling anecdote that for me summed up the life attitudes of “Doctor Denny,” as he was known to his friends. May he rest in peace.