The freight car fleet of the Pennsylvania Railroad, throughout its history up to the Penn Central merger in 1968, was the largest in the United States. That’s one reason for a statement often repeated by modelers,  that “if you model freight cars, you model the Pennsy.” They went everywhere and were seen everywhere. I can’t hope to provide a wide view of this immense fleet, but will just endeavor to make a few points that I hope are useful.

I will begin with a comparison of the largest 15 freight car fleets in 1950. In order to offer the most general use, this graph has been drawn by excluding the hopper cars of all the railroads in the graph, on the basis that for modelers of areas far from the PRR or any of these roads, the hopper cars would all but invisible in interchange. (Full disclosure: I model the California coast. Obviously your own mileage may differ.) 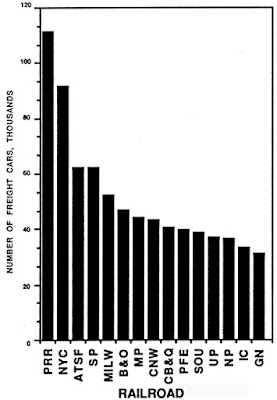 But even with hopper cars omitted, PRR is clearly the largest fleet. Note that PFE, jointly owned by SP and UP but regarded by the ICC as a private owner, shows up here.

The Pennsylvania car fleet was interesting in that it had a very large proportion of gondolas, as many as its box cars, but this post concentrates on the box cars. PRR box cars have an immediate focus: for modelers of any period from the 1920s to the end of the transition era, probably the most important PRR freight car to recognize is the Class X29 box car. 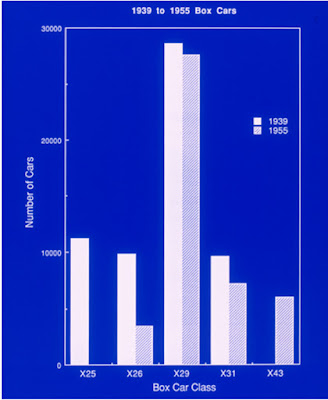 There are a great many complexities to the huge X29 car class, and I will  not endeavor to address them here in any detail. For those interested, there are some superb published sources, which I list below.

There were a great many differences in detail during the years of production (1924 to 1934), some quite minor, and I would refer the reader to the sources listed above. But I will illustrate the primary features. The earliest cars had a “car builder” panel door (not a Creco door) with two door stops to the right of the door, and a short upper door track. They also had the signature flat plate end. Built in late 1924 by AC&F (American Car & Foundry), the earliest cars predated the “circle keystone” paint scheme, and had the road name underlined (AC&F photo, courtesy Ed Kaminski). 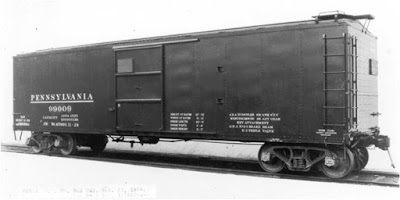 Later in the 1920s, PRR began to apply corrugated doors to the X29 production, and the two door stops of early cars were replaced by a single stop just above the bottom door track. The upper door track was also extended. Here is an example of this appearance  (AC&F photo, Richard Hendrickson collection). The very last X29 cars built, during 1932 to 1934, had Dreadnaught ends. 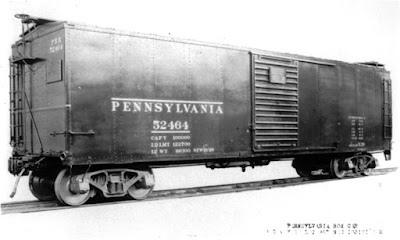 Without going into detail, I should mention that practically all combinations of the features just described can be found on X29s that underwent various upgrades or repairs. A common change in later years was the repair of rusted-out side panels at the bottom. The PRR applied what were called “patch panels” to replace the rusted area, frequently along the full car length. The Wilbur C. Whittaker photo below shows this, in a 1953 photo at San Jose, California. (Click on the image to enlarge if you wish.)

Because of their sheer numbers, modelers of almost any North American railroad before 1960 need to include models of X29 box cars in their model fleet. I will turn to modeling issues and opportunities in a following post.

Posted by Tony Thompson at 2:43 PM